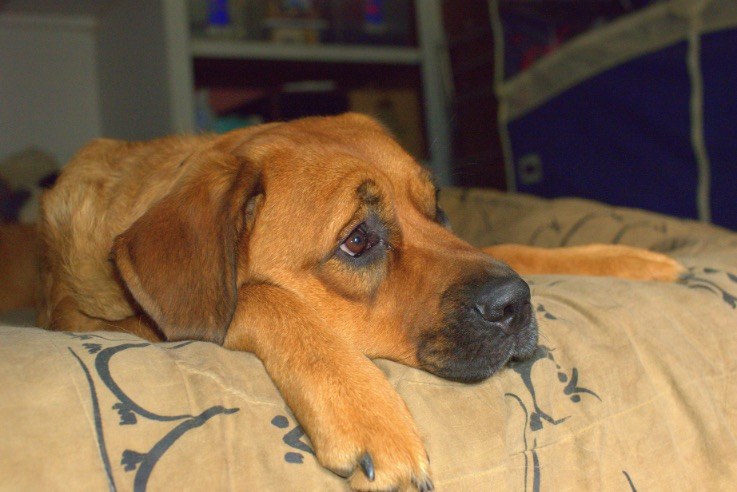 The Saint Weiler is a giant dog, the offspring of a Rottweiler and a Saint Bernard. He is a cross or mixed breed and is also called a St Weiler or a Rottweiler/Saint Bernard Mix. He has a life span of 12 to 15 years and she takes part in events and activities such as search and rescue, watchdog, carting and police work. He is a large but calm dog and is very loyal and protective.

Where does the Saint Weiler come from?

The Saint Weiler is sometimes referred to as a hybrid dog or as a designer dog. Designer dog is a term coined recently in response to the many different mixed breed dogs being bred deliberately. For purebred breeders the goal is to have a standard that needs to be followed and met. With designer dogs there are none of these and it is that first litter that is the desired outcome. This can mean there are a lot of differences in looks and personalities even in the same litters. There are some good breeders out there of designer dog but there are a lot of bad ones so take care about who you get your dog from. Here is a look at the two parents of the Saint Weiler since we have no actual information on who bred him first and where.

The Saint Bernard comes from Switzerland and it is thought they are a result of crossing native Alp dogs with Mastiffs the Romans brought with them. In the Alps in a dangerous alpine pass called The Saint Bernard Pass. It is from here the dog gets his name. A hospice was built there to help travelers and the dogs were used to guard the grounds and guard the monks when they went out to locate travelers who needed help. Their location and job led the breed to being able to withstand harsh weather conditions and able to carry out search and rescue. In the 300 years of records the Saint Bernard helped rescue over 2000 people but they did not have an official name until 1880 when they were recognized by the Swiss Kennel Club as the Saint Bernard.

Today he is a friendly dog, steady in temperament and kind. They do love to get attention but will not be as demanding for it as some breeds are. He is kind and good with children despite his size. He does have stubborn streak and early socialization and training can help iron that out.

The Saint Weiler is an interesting mix of two large dogs. He is intelligent, alert, quiet and very protective. He is a gentle and sweet dog who is eager to please and usually remains very calm and easy going. He makes a great companion or family dog, he tends to enjoy being around people and does not like to be left alone for long. Sometimes they can be shy so socialization is important to help give him confidence.

This is a giant sized dog weighing 100 to 180 pounds and standing 22 to 28 inches tall. His eyes can start out as blue when young and then change to brown when older. He has floppy medium sized ears, a long tail that hangs low, large feet and a muscular strong body. He can have the coat of either parent so it can be shorter and more coarse or long, thick and silky. Some also have the markings of a Rottie with a coat like the St Bernard. Common colors include white markings, black, browns and reds.

How active does the Saint Weiler need to be?

This is a very active dog so it will need a lot of daily exercise to keep it healthy and happy. It is too large for apartment living and it requires a large yard or even some land to play on and explore. Owners of this dog need to be committed to being active with the dog. Two long walks a day are a must along with other opportunities, jogging or hiking with you, running off leash at a dog park and so on.

For experienced owners this is an easy to train dog in general, he will listen, be eager to please, he is smart and may even need less repetition than some. He does though have an independent side that can show up more strongly in some than others! Be patient, consistent and firm. Offer him praise and encouragement, use treats and be positive. As soon as you have the puppy home you should start to add socialization to his regular routine. It will make him happier and more confident and mean you are more relaxed when out with him.

Living with a Saint Weiler

The amount of grooming a Saint Weiler needs is going to depend a lot on the coat he has. There may be a need for more regular visits to a groomer if it needs regular stripping or trimming. Brushing daily to remove tangles and debris is a must for a longer coat. It does shed a lot and that shedding increases during its seasonal blow outs. You will have loose hair to brush out of its coat and to clear up around the home. Give him a bath just as he needs one to avoid drying out the skin.

Give his teeth a brush at least three times a week and check his ears for infection once a week. Use a cleanser to wipe his ears clean and do not insert anything in them. If his nails are getting long and not being worn down with his outdoor activity they will need clipping. However dog nails are not like people’s so take care, have it done for you or learn about where it is safe to cut.

With socialization he is good with children, energetic and loving, protective and gentle. He is especially like this when he is raised with them. How he gets long with dogs and other animals can depend on which parent he is more like. Rotties tend to be more aggressive with other dogs and have a higher prey drive but St Bernards are fine with them.

The Saint Weiler is protective and makes a great watchdog. He will bark to alert you if there is an intruder and is likely to act to guard you and the family if it is needed. He does not bark much other than those times unless he hears some strange noise. He will need to be fed 4 1/2 to 6 cups of a good quality dry dog food a day, possibly more depending on his activity level and size. The food should be split into two to three meals though.

There are health issues he can inherit from his parents and they include Eye Problems, Epilepsy, Heart Problems, Bloat, Bone cancer, Hypothyroidism, Allergies, Joint dysplasia and Pano. It is always advisable when buying a new dog to visit the puppy before paying and to ask for health clearances for both the parents.

A Saint Weiler puppy can cost at the moment between $400 to $900 depending on where you are and who you buy from. He will need to be vaccinated, given a physical exam, dewormed, micro chipped, neutered and have blood tests done. He will also need a crate, leash, collar, bowls and bedding. These costs come to about $500. Then there are yearly costs. Medical basic care for pet insurance, check ups, shots and flea prevention will be between $485 to $585. Non-medical needs based on a long haired dog will come to $930 to $1030 for grooming, license, training, food, toys, treats and miscellaneous costs.

Looking for a Saint Weiler Puppy Name? Let select one from our list!

This is definitely not a dog to get if space is a problem in your home. No matter how cute it looks as a puppy this guy grows into a very hefty adult dog that needs a lot of room, a yard, lots of exercise, food, along with the usual needs of training and socialization. Owners need to be experienced not just in terms of being able to be the pack leader but also in terms of how much attention and room the Saint Weiler will need. For the right home though he will be amazingly loyal, loving, calm and protective.