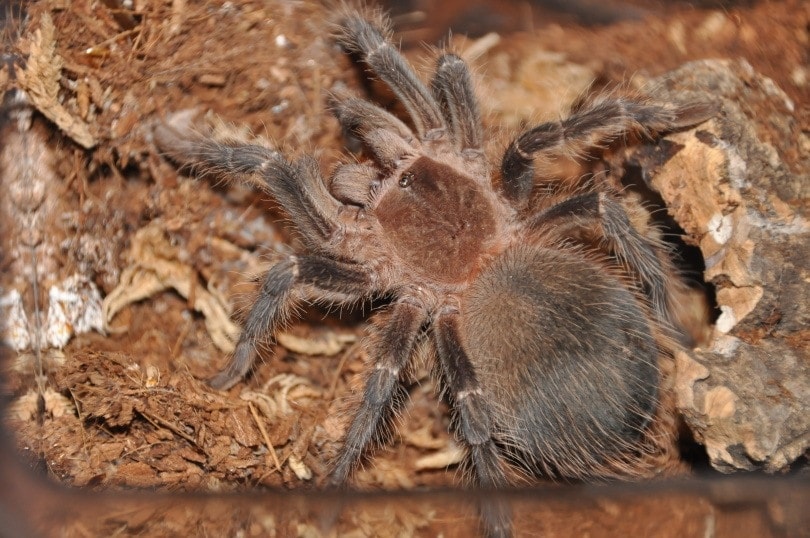 People keep all sorts of spiders as pets, but Salmon Pink Birdeater Tarantulas are by far the most popular choice for most households.  In some ways, these spiders might seem like a pretty boring choice for a pet because you can’t teach them to fetch or take them out for a walk.

However, they can be fascinating to watch and keep. This breed lends itself to easy handling, so it is a fun one. But spiders aren’t the most conventional pets out there.

This means that you ought to have deeper insights into these pets before you bring them home. So here’s everything to know about Salmon pink birdeater tarantula.

This species is argued to be among the top four largest tarantulas worldwide, growing anywhere from 8-11 inches.

Salmon Pink Tarantulas are not natural climbers and rarely leave the terrain. They don’t burrow like other spider species, although they attempt to create small caves in the wild.

These spiders are highly sought after by tarantula enthusiasts. The good thing is that they are easily accessible thanks to their ease of breeding and rapid growth. A Pink bird-eating tarantula spiderling can grow to 6 inches in its first year when fed well, of course.

Pink Birdeater Tarantula spiders are easy to care for in captivity. This is because they inhabit the forest floors, which experience up to 4–5-month dry periods annually.

They are hardy because they’ve evolved to endure hot and humid climatic conditions in the wild.

Being non-climbers and not so active burrowers, the Pink bird-eating Tarantulas are more likely to sit out in the open more than other species. This is why they tend to be on display most of the time in the pet trade, offering a great appeal to potential buyers.

Other Tarantula species tend to hide away most of the time, only coming out when it’s dark.

How Much Do Salmon Pink Birdeater Tarantulas Cost?

Salmon Pink Birdeater Tarantulas are not so expensive to purchase compared to other Tarantulas. A healthy adult Pink Birdearer tarantula can cost anywhere from $15 after tax to $150.

Females tend to typically sell for more than males because of their longer lifespans. Additionally, Tarantula spiderlings sell for a lot less than the sexed adults because they are smaller, so it’s hard to determine their sex at that stage.

It’s advisable to go for a younger captive-bred tarantula specimen, though. This is because the young adapt to new enclosures a lot faster than the adults.

It’ll also allow you to watch them grow, and they’ll get used to being around humans.

Salmon Pink Birdeater Tarantula spiders are bold and know how to pick their battles. They become less aggressive as they get older and rarely get into fights.

You may notice them retreat rather than put up a fight when provoked. However, these spiders still know how to protect themselves against their enemies.

They kick their hairs to defend themselves, which causes humans and other animals an uncomfortable itch.

Pink bird-eating tarantulas are not social. Therefore, it’s best to keep them in isolation to avoid issues of cannibalism in the enclosure.

These spiders are also skittish and do not make large webs nor burrow much. But they love digging.

Salmon Pink Birdeater Tarantulas have a distinctive body shape. They have a leg span of up to 10 inches, making them one of the largest Tarantulas ever.

Like all spiders, Salmon Pink Tarantula spiders have a cluster of eight tiny eyes. This might make you think that they have powerful eyesight, but these spiders can’t see very far, only a few inches away. Interestingly, a Pink Birdeater Tarantula’s eyesight can only detect the difference between light and dark.

These spider species can’t see well, so they depend on their incredible sense of touch to find prey. They have pedipalps, a pair of feelers attached to their heads, which are sensitive to touch and chemical cues. These features, plus the super-sensitive fine hairs covering their bodies, allow the spiders to stay in touch with their surroundings.

The feelers and the body hairs detect the slightest air disturbance caused by an insect, which they catch as prey.

You’ll always distinguish a Salmon Pink Birdeater Tarantula by its color. They are usually partially pinkish when young, with a slightly darker abdomen.

However, mature adults have a different color. They are usually brown-black with clear lateral stripes on their tibiae and patellae.

These spiders also have long, slightly curly reddish-brown hairs sticking out of their mouthparts, legs, and abdomen.

How to Take Care of a Birdeater Tarantula

A Salmon Pink Birdeater Tarantula does not need complicated care. The first thing you need to put in place is a shelter that mimics their natural terrestrial Brazilian habitat.

You also need to consider the size of your specimen when building an enclosure. Spiderlings and juvenile spiders will require a lot less room than mature spiders. However, if you get a young spider, you must consider that you’ll have to upgrade the tank size as your pet grows.

The general rule of thumb is to ensure that the enclosure is at least 3-4 times the spider’s leg span size. The width should also be 1.5-2 times wider and at least 5 inches high to allow the pet to burrow comfortably.

You can use an aquarium with a lid or a plastic container, although you must drill small holes on the cover. Also, place the enclosure away from human traffic as the spiders are super-sensitive and can detect vibrations from human footsteps, which can frustrate them.

Decor items like rocks, logs, and plants in the enclosure can offer your pet a place to hide.

The substrate in your spider’s enclosure should be at least 3 inches deep to allow it to dig, even though it creates shallow burrows. You can use substrates like potting soil as long as it’s free of pesticides and fertilizers, leaf molds, or vermiculate.

Try to dampen it to create a humid forest floor, but don’t wholly wet it. Humidity levels should range between 75% to 85%. Also, slightly press down the bedding to provide your pet a firm footing.

The good thing about these spiders is that their bodies are sturdy and resilient, designed to withstand temperature and humidity fluctuations. However, the enclosures should have steady conditions, with temperatures of 75- 85 degrees Fahrenheit.

The temperatures can drop slightly at night, so you can use a heat mat or install a red or black bulb to help maintain optimal conditions.

Spiders are nocturnal, so they tend to avoid light. Therefore, never leave a light bulb on at night.

Do Pink Birdeater Tarantulas Get Along with Other Pets?

These spiders are anti-social, docile are quiet animals. For this reason, they do not thrive in multi-pet households.

It’s unlikely that your tarantula and other pets will co-exist or ever have positive interactions in the home.

Pets like dogs and cats are prey-driven and will always stalk your spider’s enclosure intending to harm it. On the other hand, these spiders also have a prey drive in their own way, set up with fangs ready to incapacitate prey. Both pets will likely view each other as a threat and harm one another.

Luckily, these species aren’t venomous, so their bites won’t harm any of your other pets. However, Salmon Pink Birdeater Spiders also defend themselves with their body hairs, which can cause your other pets a lot of pain.

You can’t trust other household pets around your spider. So, it would be best to always keep them as separate as possible.

What to Feed Your Pink Birdeater Tarantula

Salmon Pink Birdeater Tarantulas are fast-growing insects, and they need to eat regularly. They feed on small rodents like lizards, insects, frogs, and even some snake species in the wild. For this reason, you should mimic this diet in captivity by supplying your adult pet spider rodents like mice.

However, if you are squeamish, you can provide it with insects, baby crickets, live locusts, baby mice, fruit flies, mealworms, grasshoppers, and moths, depending on the spider’s age,

The good thing is that you don’t need to dust the food with calcium supplements to provide nourishment. Ensure you don’t leave leftover food lying around, as it can cause injury to your tarantula spider. Also, provide clean water using a shallow dish or a Tarantula sponge.

A post shared by Charlton’s Plants and Exotics (@charltons_plants_and_exotics)

It’s best to keep your spider’s den as natural as possible. You can add plants and soil to achieve a realistic outlook. However, you should use artificial plants because Tarantulas don’t require lighting, a condition necessary for plant growth.

This will limit plant growth and cause them to dry or decay, introducing bacteria to the enclosure. Also, Pink Birdeater Tarantulas are large and hate rough handling.

You may want to avoid petting them or holding them unless you have huge hands. Despite their robotic appearance, they are still delicate spiders and handling them unnecessary risks dropping them, bursting their abdomens, and killing them.

With proper care, conditions, and food, your Tarantula spider can live for 15 years.

Breeding Salmon Pink Birdeating Tarantula spiders isn’t difficult, but it requires much thought. For instance, ensure that you have the facilities to accommodate hatchlings until they mature. This type of Tarantula reaches sexual maturity by its second year.

He then deposits his sperms on the silk and sucks it up into the tips of his pedipalps, which shows it’s ready to start breeding. Usually, the male approaches the she-tarantula, who rears up and opens the fangs as if it’s feeling threatened.

This position allows the male to reach up and secure the fangs using his front leg’s hooks. He then inserts his sperm-loaded pedipalps (or feelers) into the female’s genital openings located on her abdomen’s underside.

Three months after mating, the she-tarantula starts spinning a thick carpet onto which to lay her eggs. She can lay up to 2,000 eggs, which she covers with the silk to form an egg sac to guard the eggs for several weeks until they hatch.

Are Pink Birdeater Tarantula Suitable for You?

When you think of buying a pet, a spider may not be the first thing that comes to mind. But, as unconventional as they can be, a pet Salmon Pink Birdeater Tarantula can be an ideal companion for the right person and every spider collector’s must-have.

These pets are also inexpensive to maintain and require little to no socialization, meaning you won’t worry about potential separation anxiety. However, Pink Birdeater Tarantulas spiders aren’t ideal for you if you want a cuddly or playful Pet. You shouldn’t allow kids near them because they can be defensive and cause your kids to itch.