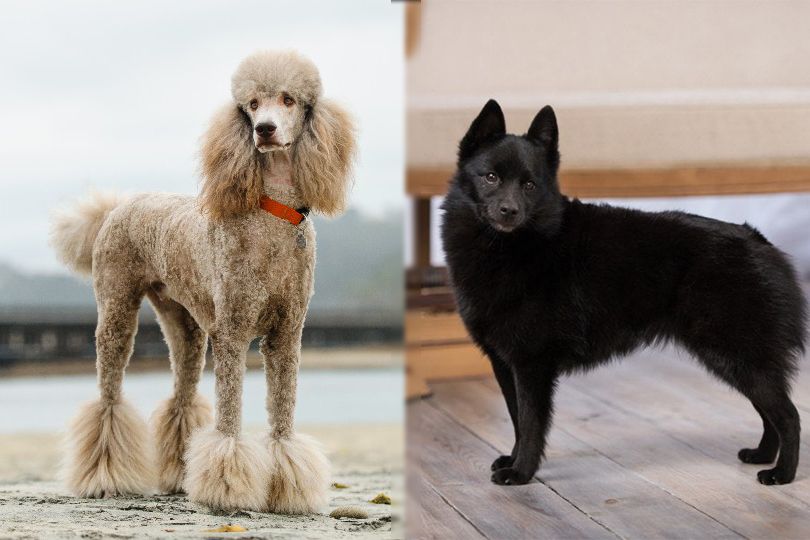 A cross between a Poodle and a Schipperke, the Schipper-Poo is a playful, curious, and friendly dog with some of the best traits of both parent breeds. Schipper-Poo dogs are highly intelligent and often have a mischievous streak. This penchant for getting in trouble frustrates some owners, but others find their antics endearing. Schipper-Poos love attention, so they are often very trainable, but they can be stubborn. Because they are mixes of two different breeds, every Schipper-Poo is unique, and some dogs may take more after one parent breed or the other.

Schipper-Poo Puppies – Before You Buy…

What’s the Price of Schipper-Poo Puppies?

Schipper-Poos are less common than other designer dogs, so finding a Schipper-Poo usually requires some work. There are no rescue organizations dedicated to Schipper-Poos, but Schipper-Poo puppies might be available through breeders. Because they are a newer and rarer mix, prices vary and there is no standard price point.

When you do find a Schipper-Poo breeder, ensure that your breeder is properly caring for their dogs before buying. Ethical breeders will properly feed, exercise, and care for their adult dogs and puppies, including proper vet care. If the price is too good to be true, that may be a sign that of a puppy mill or a breeder that doesn’t care for animals properly.

1. Schipper-Poos can also be Mini.

2. The Schipper-Poo has Ancient Ancestry.

Both the Poodle and the Schipperke have long histories. The first Poodle ancestors may have come from Asia into Germany, where the breed entered its modern form. They might also have ancestry from North Africa and Portugal. Although the first purebred Poodles are from Germany, Poodles are the official dog of France and are a strong cultural symbol for the French people.

The Schipperke is a Belgian breed of dog that may have been used as a watchdog on riverboats or as a small sheepdog. Historically, the locals called them Spitskes or Spitses, but when the breed was organized in the 1800s, the organizers chose the name Schipperke, meaning little captain.

Many Schipper-Poos in the US have short, stubby tails because of docking, but sometimes that stubbiness is natural. Schipperkes often carry a bobtail gene that they might pass down to the Schipper-Poo. On the other hand, both Schipperkes and Poodles can have naturally long tails as well. Whether their tail is long or short, Schipper-Poos will love to wag it!

Temperament & Intelligence of the Schipper-Poo

Schipper-Poos love to play! Their high energy levels and friendly personalities can make them a great fit for an active family. Well socialized Schipper-Poos will often get on well with kids and make great playmates from morning till night. Smaller Schipper-Poos are great companions for small children because they’re unlikely to knock a child down. If a Schipper-Poo is on the larger end, some supervision and additional training might be required to keep children safe.

Because Schipper-Poos love attention and get bored easily, it can be harder for single people or older individuals to care for them. Schipper-Poos often do best if they can come along with their owners wherever they go and spend some time playing and exercising every day.

Schipper-Poos are a social breed that often loves the company of other dogs. They love furry playmates, and a second dog might serve as a source of entertainment and companionship. Schipper-Poos also can get along with cats and other mid-sized pets with proper training and socialization. Some Schipper-Poos tend to chase cats when not properly trained.

Many Schipper-Poos have inherited a strong prey drive that leads them to chase after smaller animals. Because of this, Schipper-Poos might not do well in households with small pets like ferrets, hamsters, or small birds. If you do have small animals, be prepared to watch your Schipper-Poo closely and keep your pets separated.

Things to Know When Owning a Schipper-Poo:

The Schipper-Poo is a fairly easy eater, requiring about 1½ to 2½ cups of total food a day; however, this will depend on the size of your dog. Most Schipper-Poos do best with two or three meals a day. Schipper-Poos are at risk of obesity, so food should be monitored and regulated. Schipper-Poos will be happiest and healthiest when fed high-quality food in the proper quantities.

They are not quite as hyper as Schipperkes, but Schipper-Poos will require moderate exercise every day. Although the amount of exercise needed varies from dog to dog, most Schipper-Poos enjoy a daily walk and other forms of exercise. They enjoy playing with their owners and exploring the world around them. Because Schipper-Poos tend to be curious, they often enjoy going to new places with their family, provided they are kept on a leash.

Schipper-Poos usually do well with training because of their loyalty and intelligence. However, Schipperkes are known for their stubbornness and many Schipper-Poos have inherited this trait. Many owners find that training requires patience and persistence to overcome this stubbornness, but it eventually will pay off.

There are lots of possibilities when it comes to a Schipper-Poo’s coat. Some may have soft, curly fur, while others may have straighter hair or something in between. If a Schipper-Poo takes after his poodle parent, he won’t shed much but will still require occasional bathing and grooming to keep his coat healthy and clean.

Other Schipper-Poos will have moderate shedding coats. A shedding coat will require daily brushing to maintain. Schipper-Poos only require bathing when they are dirty or smelly, and too frequent bathing may cause skin dryness. Schipper-Poos might also require occasional cleaning around the eyes and ears. If a Schipper-Poo gets tear marks below their eyes, regular wiping might be required. Like other dogs, regular tooth brushing will help Schipper-Poos stay healthy.

Schipper-Poos are a healthy breed, but some health problems may still arise. As a designer dog, the Schipper-Poo tends to be healthier than most purebreds. Regular vet care will help you find and treat health problems early. This includes regular physical exams, as well as hip and thyroid tests to watch out for specific health concerns.

Schipper-Poos may have the same health conditions that are common in Poodles and Schipperkes. Here are some conditions to watch out for:

If you’re looking for a bundle of fun, the Schipper-Poo might be the dog for you. Schipper-Poos are some of the most affectionate and excitable designer dogs out there. Just like Poodles and Schipperkes, Schipper-Poos have big personalities and can sometimes be a handful. They are a fairly healthy breed with a lot of energy in a pretty small package. Although a Schipper-Poo may be hard to track down, they are great for families that play hard. With a unique mix of affection and cheekiness, if you own a Schipper-Poo you might find him impossible to replace.