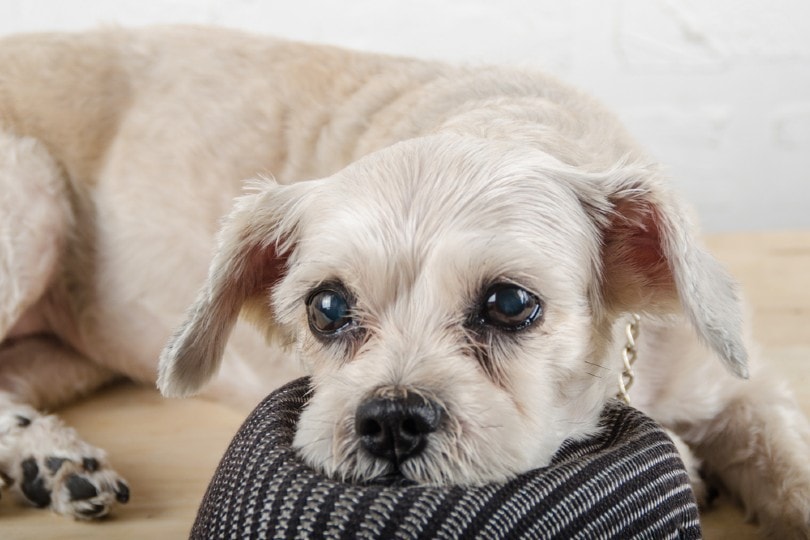 The Schnau Tzu is a mix of a Shih Tzu and a Miniature Schnauzer. Interestingly enough, a Schnau Tzu is typically smaller than both breeds! But if you’re looking for an extremely loyal dog that loves to follow you around, they’re a great choice.

Not only that, but they also have a mild temperament that is great for kids. Compared to other small dog breeds, they don’t bark much, but they don’t handle extended periods alone well. So, if you have to leave for 8 hours every day for work, this probably isn’t the breed for you.

Finally, Schnau Tzus typically deal well with other pets, but they can be a bit shy for a while due to their smaller size. So, if you have other animals in the home, expect them to need time to warm up, but once they do, they’re incredibly social dogs!

If you’re still interested in Schnau Tzus, keep reading, as we break down how they might make the perfect addition to your home.

Schnau Tzu Puppies — Before You Buy

While Schnau Tzu puppies are full of energy and extremely sociable, they definitely have a stubborn streak that can make them hard to train if you wait too long. But as a puppy, they’re relatively trainable and love to please their owners.

These dogs also love to follow you around all day and be your shadow, so if you want a dog that loves to cuddle and won’t ever leave you alone, the Schnau Tzu is a great choice.

For a designed dog breed, Schnau Tzu puppies are on the more affordable end of things. You can usually find a Schnau Tzu puppy for between $150 and $400. However, keep in mind that this is only for the cost of the dog.

You’ll still need to purchase all the necessities, including a leash, color, deworming, shots, spaying/neutering, chipping, blood tests, and more. When you add everything up, you can expect to spend anywhere from $800 to $1,300 in the first few months, once you factor in all the needed medical visits, supplies, and upfront purchase price.

Because Schnau Tzus have such a thick coat, you’ll need to brush them daily to keep their hair from matting. They are low to moderate shedders, though, so expect a bunch of hair to come out each time they settle down for a brushing session.

2. Schnau Tzus are shy around other dogs

This is especially true around larger dogs. But as the Schnau Tzu warms up, they can become very social creatures. So, while Schnau Tzus do well with other pets that they’re consistently around, they might struggle at a dog park.

Temperament & Intelligence of the Schnau Tzu

Schnau Tzus are typically loving and loyal dogs that love to follow you around. They have a playful temperament and love to be around other people, making them an excellent choice for families. In fact, the only time these dogs really have problems is when they are left alone for too long.

When this happens, they can start to act out by chewing, barking, or other destructive behaviors. However, as long as they get adequate attention and are around people, you usually won’t have these problems.

Still, Schnau Tzus are known to have a bit of a moody streak, so if you can see that they’re not as playful as usual, it might be best to leave them be for a little bit.

Schnau Tzus are a great family dog. They love being around people, and the more people around to give them attention, the better. Still, like all small breed dogs, it’s best to ensure that all the young kids in the house are steady walkers.

This is because if a child falls on a Schnau Tzu, they could easily hurt them, and at that point, the Schnau Tzu might nip to protect themselves. However, Schnau Tzus are rarely the aggressor, even when they are feeling a bit moody.

But if all your children are old enough, a Schnau Tzu can be the perfect addition to your family!

While Schnau Tzus are great with other pets, keep in mind that they handle smaller pets better than larger ones. Typically, Schnau Tzus are shy when around larger dogs, but they will warm up over time. Extra socialization early in life can significantly help with this.

If you have other pets, it’s best to see how they will interact before moving them into your house permanently. While there usually aren’t any concerns, it’s always best to be safe.

With smaller pets, this usually isn’t a concern, and the playful nature of a Schnau Tzu will take over. It’s not uncommon for cats and Schnau Tzus to get along and play together from time to time.

Things to Know When Owning a Schnau Tzu

It’s always best to go into a situation with eyes wide open. That’s why we broke down everything that you need to know about these playful dogs here!

As a smaller breed, a Schnau Tzu only needs ½ cup to 1 cup of food per day. However, you need to split this food into at least two separate meals, although three meals are even better. This will allow your Schnau Tzu to feel full throughout the day and prevent them from overeating at any one time.

Also, only feed them high-quality food because they can develop pancreatitis, and never feed them table scraps. Finally, when selecting treats, find ones that are low in fat, as this will help prevent future health concerns too.

Despite their smaller size, Schnau Tzus need a moderate amount of activity. You should strive for 45 to 60 minutes of exercise per day, and it’s best to do this by giving them a few short walks throughout the day. However, you shouldn’t set too hard of a pace for these walks, as 8 miles per week is an acceptable amount of exercise.

While not getting enough exercise can lead to problems, if you over-exercise your Schnau Tzu, they can develop health concerns as well.

It’s best to start training a Schnau Tzu as early as possible. That’s because a Schnau Tzu is a bit of a mixed bag when it comes to training, and they have a stubborn streak that settles in more with age.

While Schnau Tzus aim to please, their overall intelligence level depends on which breed they got their smarts from. Miniature Schnauzers are extremely intelligent, where Shih Tzus are much less so.

If your Schnau Tzu takes after a Miniature Schnauzer, they will be relatively easy to train, and you can teach them tons of tricks. But if they take after a Shih Tzu, all the training in the world won’t make up for their lack of intelligence.

You need to brush a Schnau Tzu every day. That’s because Schnau Tzus have thick coats that are prone to matting. They can also be low to moderate shedders, and brushing them every day keeps all that hair at bay.

With a Schnau Tzu, you might notice both these features, one or the other, or neither. Unfortunately, it all depends on which parts the dog gets from both breeds, and there’s no way to say what you’ll get.

Anytime you bring a new dog into the household, you need to know what medical concerns to look out for. This way, you can catch problems before they get too serious.

You need to check a Schnau Tzu’s ears and eyes at least once a month and brush their teeth a few times a week to keep potential health concerns at bay.

A Schnau Tzu is a rare breed where there aren’t many differences between males and females. This is because so many of the traits are mixed and matched from the two different parent breeds, it’s impossible to know precisely what you’re going to get in a puppy.

Because of this, the size, weight, and even temperament of a Schnau Tzu are unlikely to change regardless of sex.

When you’re looking for a small companion dog, it’s hard to beat what the Schnau Tzu offers. They’re loving, playful, and great with kids. Not only that, but if you already have smaller pets, they’ll fit right in and make a great addition!

Just be sure that you have plenty of time to devote to these dogs, as they don’t like to be left alone. They’re great dogs that love to cuddle and play — what more could you ask for?