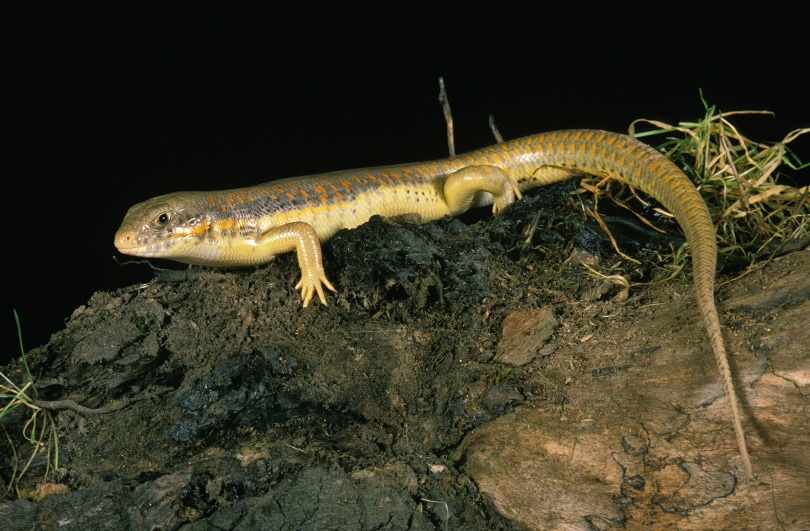 Lizards can be wonderful and interesting pets. There are so many different lizards to choose from. The Schneider’s skink is one lizard that can become an amazing pet.

Schneider’s Skinks are a medium-sized lizard with white underbellies and olive-brown backs with orange specks throughout. These lizards are a low-maintenance pet as they have a very mellow personality and are hardy. They are also lovely to look at. They enjoy spending time in your hand and will even crawl up to your head if they are able. They tend to be very active and inquisitive little creatures.

They like their habitat hot and dry, similar to how you would house a Bearded Dragon. They need lots of places to hide and burrow. Keeping a proper setup for them will help keep them happy and healthy.

How Much Do Schneider’s Skinks Cost?

Most Schneider’s Skinks you find in pet stores and online are captured from the wild as it is very hard to breed these animals. They are often caught in the semi-desert areas of Egypt.

Schneider’s Skinks are very active and curious creatures. They will explore new areas if given the chance. They also enjoy being held and will climb all over you if able. These skinks can also be seen running around their enclosures often. They may be small, but they have a lot of energy!

The Schneider’s Skink can grow up to 12 to 16 inches. It has a snub snout, small sturdy limbs, and a tube-shaped body. Their underbellies are white and the top of their bodies are an olive-brown with specks of orange.

How to Take Care of Schneider’s Skink

You should have at least a three-foot vivarium when housing one skink. If you plan to have more than one skink it is a good idea to have more room so that they can avoid each other if they need time alone.

There should be at least 2-3 inches of substrate for the skinks to burrow in. There should also be hiding places and basking perches, using a cork bark tube or artificial cave would work well. Adding flexi sticks and vines will also provide extra climbing space for your skinks. Be sure to keep the vines and sticks close to the floor, though, as Schneider’s Skinks are not very good climbers and could fall from a higher height.

A bowl of water should also be provided for the skink to drink and bathe in. Provide one that is large enough for the skink to fit in, but small enough that the skink can easily escape. Avoid a tragedy by making sure the bowl is not too big or has too steep of walls.

Schneider’s Skinks are diurnal, meaning they are active during the day and inactive at night. You should adjust their lighting to accommodate for this. Schneider’s Skinks require UVB, so a UVB lightbulb is required. This light should be on a timer and shut off every 12-14 hours. Be careful of letting natural light shine on the enclosure in addition to the bulb, as it can cause the temperature to rise to unsafe levels.

This species tends to be on the dry side and their humidity should not exceed 40%. You can achieve this by misting only once per day in the morning. During shedding time, though, you should mist twice a day to help the skink with its shedding process. You can tell if your skink is about to shed if its skin looks dry and faded.

Do Schneider’s Skinks Get Along with Other Pets?

Schneider’s Skinks get along well with others of their own species and can be housed with one or two other Schneider’s Skinks. They are social creatures and will enjoy having the company of other skinks.

Be sure to keep them separate from cats or larger animals, as these larger animals can hurt the smaller skink. Animals such as cats have a prey drive that makes them more likely to chase and hurt smaller animals.

What to Feed Your Schneider’s Skink

The main part of a skink’s diet should consist of mealworms and live crickets. They should also be fed fruit and vegetables once a week to stay healthy. Bananas, apples, carrots, and grapes are all great to try out. Some skinks may be picky, so you may have to try a variety of foods before finding what your skink enjoys. You can also try feeding your skink a boiled egg. Be sure to cut up all food given to them into small pieces so they can more easily swallow it. They also can eat thawed frozen pinkie mice in moderation.

A healthy Schneider’s Skink will be active and alert. Signs of loose skin on your skink could point to an underlying illness. Other signs to look out for include diarrhea, fluid or mucus from the nose, or swollen hind limbs.

To keep your Schneider’s Skink healthy, you should be sure to provide a proper housing setup for them, feed them an appropriate diet, and interact with them on a regular basis to watch out for signs of illness. Making sure there is the right amount of light and humidity in their setup is also vital.

Schneider’s Skinks are overall very hardy animals, so if you follow known guidelines for skinks, you should see few health problems.

Breeding Schneider’s Skinks can present a very difficult challenge as they are not prone to mating in captivity, hence the majority of skinks are captured in the wild.

Their mating behavior is quite aggressive, and females can often be injured due to this. Fertilized eggs are then carried for six to seven weeks. After this, you should incubate the eggs for an additional seven to ten weeks.

Schneider’s skinks are also monoestrous, meaning they only have one clutch of eggs every year. This makes breeding even more difficult as there is only one shot per year to breed them.

Are Schneider’s Skinks Suitable For You?

Schneider’s Skinks are interesting lizards that enjoy interacting with humans. Due to their hardy nature, they are a great first pet lizard if you have never owned a lizard before. They are great to consider if you want a lizard that will let you handle it frequently. They are also very interesting to watch run around and to watch them hunt. If you have the time to construct a suitable living, time to devote to them, and the understanding that they are an up to twenty-year commitment, a Schneider’s Skink could be the perfect pet for you!