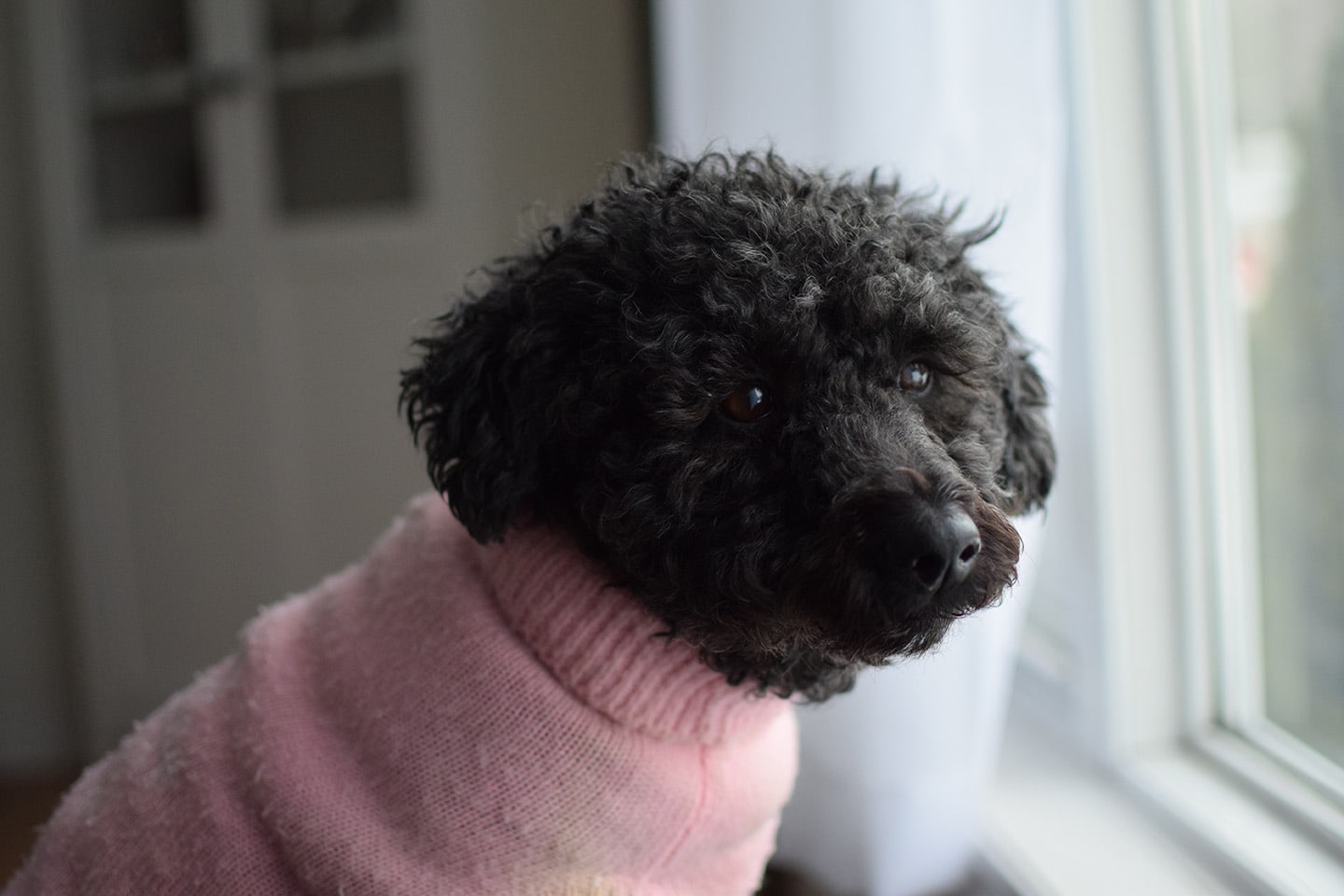 The Scoodle sometimes called the Scottiepoo or the Scottish Shoodle, is a designer dog breed that mixes the Poodle with the Scottish Terrier.

Scoodles are smart as a whip and affectionate with family, making them loyal companions. Despite their smaller size, they make good watchdogs as they’re alert and responsive.

They’re very well-suited to a home where someone is home all the time as they can be anxious when left alone for too long. A Scoodle who is left bored or anxious can become destructive. So, making sure they have plenty of stimulation is going to be necessary.

While Scoodles can make good dogs for families with older children, they’re not as tolerant of young children as other breeds. They can learn to tolerate children if socialized early but may be nippy if handled roughly or disrespected.

Scoodle Puppies: Before You Buy

What’s the price of Scoodle Puppies?

Scoodles are a designer dog breed. The average price of a Scoodle puppy is around $750. Still, you should expect to pay about $1000 with prices fluctuating up and down based on the parent dogs’ size, quality, and pedigrees.

The first known mention of the Scottish Terrier is in John Lesley’s History of Scotland from 1436 to 1561, which describes them as dogs of “low height, which creep into subterraneous burrows, routs out foxes, badgers, martins, and wild cats from their lurking places and dens.”

The quote seems to make sense since Scottish Terriers were bred as ratting dogs, but no written mention of them is made up until then.

2. The “poodle cut” is meant for function, not fashion.

While the traditional poodle cut might look like a high fashion statement, the cut is meant for hunting function. The poodle was initially bred as a water retriever dog; that is to say, they were born to bring back hunted waterfowl to their owners.

Their heavy, fluffy coats would make them less dynamic in the water but shaving all their fur off would make them too susceptible to the cold. To get the best of both worlds, the poodle cut was born.

The poodle cut allows more water dynamic movement by shaving off most of the fur, while the tufts remaining protect the joints and internal organs from becoming too cold.

They haven’t lost the skills associated with the cut, either; some hunters still use poodles as water retrievers today.

3. Poodles have hair, not fur.

Poodles don’t have fur, which grows to a certain length then falls out (shedding). Poodles have hair that, like humans, continues growing forever and doesn’t shed. Like humans, the poodle’s coat can respond to hormonal changes in the body, and they can experience alopecia or loss of hair. For instance, Female poodles are prone to thinning of the hair after giving birth.

Scoodles take after both parents. They do have fur but shed significantly less than most other dogs.

Scoodles are highly intelligent and very confident dogs, which can work against them at times. They take the sharp intellect of the Poodle and combine it with the stubborn self-assuredness of the Scottish Terrier, and they’ll be sure to tell you when they’re not interested in being trained.

Owners of Scoodles will need a firm hand when it comes to training their Scoodle.

Scoodles can be good family dogs if they are socialized young or have only older children. Families with young children will want to watch their children when interacting with their Scoodle.

Scoodles are not as tolerant of being manhandled as some other dog breeds and may snap at a child who is unaware of how to interact with them respectfully. While young socialization can help, Scoodles may never accept being mistreated. So, children should be monitored when they’re interacting with a Scoodle.

Are Scoodles Good With Other Dogs?

Scoodles can be good with dogs, but in a similar vein to young children, Scoodles will not tolerate a dog who is too uncivilized with them. Socialization is essential when introducing your Scoodle to another dog, as is training the other dog to respect your Scoodle.

A Scoodle may bite or growl at a dog who isn’t appropriately respectful of their personal space. Keep in mind that puppies who haven’t been well-socialized with other dogs will need extra supervision when socializing with Scoodles.

Are Scoodles Good With Cats or Small Animals?

Scoodles may chase and harass cats as they are energetic and have strong prey drives. They were bred to hunt rodents. So, never leave a Scoodle alone with a small animal for the safety of both animals.

As with dogs, socialization is critical. Scoodles are highly intelligent and respond well to training. So, training your Scoodle to treat other animals appropriately is essential to their wellbeing.

Things to Know When Owning a Scoodle

Scoodles are very active and energetic dogs who need a lot of food to keep up with their busy lifestyle. They’ll need about 3/4 to 1 1/2 cups of dry food a day to keep them energized. If you want to feed your dog wet food, adjust the dry food amounts to avoid gaining too much weight.

Scoodles are very active dogs. They’re bred for hunting, so they’ve got the athleticism to match the job. While they don’t necessarily need a job, they need exercise and mental stimulation to be happy.

Scoodles can be headstrong and stubborn. They’re brilliant, so they respond well to training, but they can be proud and vocally against the idea of being told what to do. Scoodles require someone who will be firm and respect their space and understand when the training has to be over.

Scoodles don’t need an exceptionally massive amount of grooming which they owe to their Poodle heritage, but they do need at least a weekly brushing. Grooming needs will vary based on whether the dog’s coat takes more strongly after its Poodle or Scottish Terrier side of the family.

A Scoodle who takes more strongly after their Poodle parent will have less intense grooming needs since their shedding will be minimized.

Scoodles are generally healthy dogs, but they can pick up hereditary illnesses from both sides of their genetic pool as a hybrid breed. When dogs are purebred, their genetics are usually more carefully considered when breeding a sire and dam.

As a result, there’s little point in registering your litters to the ACHC, and the dogs are bred with very little regulation. With no regulation or oversight, there’s no telling who is breeding these dogs and what their genetic profiles look like.

When purchasing a dog, it’s best to see if you can get genetic profiling for your dog’s parents and the dog you’re buying to have the information you need to take care of your dog.

Scoodles are an up-and-coming designer breed that is looking to make its way into your hearts and families! They’re beautiful dogs that take the best traits of the Poodle and the Scottish Terrier and package them up neatly, ready for you to love!

Unfortunately, because of their designer breed status and relative novelty on the designer scene, it’s hard to find a Scoodle without going to a breeder. So, make sure you’re doing your due diligence to find a healthy dog who was bred under ethical conditions.