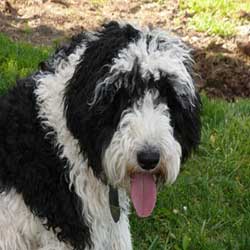 The Sheepadoodle is a mixed breed resulting from a pairing between the Poodle (Standard) and the Old English Sheepdog. She is a medium to large dog who should live between 12 to 15 years. While this article focuses on this size there are smaller versions if you want a dog like this but not as big! She is also called a Sheepdogdoodle, Sheepdogpoo and Sheepapoo. She is a very calm, sweet and well behaved family dog who is very loving and affectionate.

She is a great dog, loving and devoted and always so eager to please. She needs lots of exercise and attention though and is not easy in terms of grooming and controlling her coat. However she will make you smile every day and can be very well behaved and very rewarding to own.

Where does the Sheepadoodle come from?

The Sheepadoodle is an example of a popular trend in dog breeds called Designer dogs. These dogs are a mix between usually two purebreds and have been growing in popularity and numbers over the last 30 years. Some are planned and bred with some intention by good breeders and many are created and then over bred to make money from the demand there is by disreputable breeders and puppy mills. Be careful therefore where you buy from. Because of how many there are and the nature of how some came to be sometimes we do not have information on who, where and why they were bred. In those cases we look at the parents to get an understanding of what might go into the mix. Keep in mind that there are no guarantees when it comes to looks or temperament. You could get the best of both breeds in your puppy, but you could also have more of a mix or even the worst.

This dog really does have very little known for sure when it comes to his origins. It is thought he comes from somewhere in the south west of England some time in the early 1800s. It is thought he was used to drive to sheep and cattle into market. He came to the US in the late 1800s and got a name for being a dog the wealthy had. The American Kennel Club recognized the breed in 1885 and it was not until the 1960s that he became more known as a family dog.

The OES is a playful, clownish and loving dog who is a great family dog but needs a lot of grooming care when it comes to his coat. He stays puppy like for longer than some dogs and is smart and a quick learner. He has talents in obedience, herding, search and rescue and agility. He needs a lot of physical and mental stimulation and is not good being left alone for too long. Some can be protective and some are not.

The Poodle is not French originally as most think, though it was in France where the breed was developed further. In fact it is believed he started out in Germany as a waterfowl hunter. His looks attracted the rich and he was bred to smaller size to become a companion ladies carried with them. He comes in three sizes, Standard, Miniature and Toy.

Today he is known for his extreme intelligence, being easy to train and for his goofy and playfulness. He is always keen to please and makes a wonderful pet for anyone.

The Sheepadoodle is a great family pet, she gets on well with everyone of all ages, is affectionate, playful and not dominant so easy to train. She is also a very loyal dog and loves to be with the family at the center of it all. She is calm and sweet in temperament and very sociable. She is eager to please and loves to get lots of affection and praise. This is an intelligent dog and she is generally very well behaved but does have a fair amount of energy so needs enough outdoor time each day. She prefers not to be left alone all day every day.

She is a medium to large dog, smaller ones weight 45 to 65 pounds and the larger ones 60 to 80 pounds. She stands 13 to 24 inches tall and has a sturdy but compact build with a square head and droopy ears. Her face has feathering and her muzzle is usually black. She has almond shaped eyes and her coat can be long, curly to wavy and soft to wiry. Colors include gray, white, black, silver and tan. Some may be white with black patches.

How active does the Sheepadoodle need to be?

She has a lot of energy and will be fairly active so will need regular walks, runs and play time to keep her healthy and happy. She will enjoy having toys to rotate through and it is a good idea to have some that will challenge her mentally too. Ideally she should have access to a yard but she can adapt to an apartment if she has to. Take her to a dog park regularly and some owners find their Sheepadoodles love water and swimming. With her coat though should you be taking her swimming or camping it would be a move to have her shaved beforehand.

She is smart and very eager to please so training and socialization and should go well and fairly quickly. Early socialization and training are an important part of being a dog owner so make sure it is something you give priority. She responds better to positive training, rewards and praise using a firm tone and being consistent.

Living with a Sheepadoodle

Poodles are considered to be hypoallergenic and Sheepdogs are over three quarters of the time also hypoallergenic so in almost all cases their offspring are also good for people with allergies. She does not shed a lot but she will need daily brushing to take care of her long coat. She will also need regular trips to a groomer to have it trimmer and clipped. She will need to be bathed but just when needed and you could do that at the groomers when she is being clipped or trimmed. Another thing that could be taken care of then is her nails which will need clipping when too long. Her ears should be checked and wiped clean once a week and her teeth should be brushed as often as she well let you, but at least twice a week.

She is a great family dog so is very much suitable for children of any age though the smaller children may need supervising with the large sized Sheepadoodle in case there is accidental knock over. She loves to play with children and other dogs but often she will let them do the initiating. She is also very good with animals. Early socialization and training really helps too.

She will bark to alert you of an intruder and otherwise does not bark often at all. How much she eats will depend on her size but it could be between 3 to 4 cups of high quality dry dog food a day. That should be split into at least two meals. She is good in most climates.

There are certain issues her parents are more prone to that could be passed to her. They include Patellar luxation, Addisons, Cushings, eye problems, Von Willebrand, Legg-Perthes, epilepsy, bloat, hypothyroidism, deafness, Hip dysplasia and skin problems. Visit a puppy before buying so that you can see her living conditions and the health and happiness of the other animals too. Also ask to see health clearances for both parents.

Costs involved in owning a Sheepadoodle

A Sheepadoodle puppy could cost between $900 to $2900. She is quite a popular dog because of her looks and temperament so that makes the price a bit higher than some other designer dogs. She will need a crate, collar and leash, spaying when old enough, chipping, shots, deworming and blood tests and that comes to between $450 and $500. Yearly basic medical costs for check ups, pet insurance, flea prevention and vaccinations come to between $485 to $600. Yearly other costs for things like the professional grooming, food, treats, toys, training and license come to between $920 to $1000.

Looking for a Sheepadoodle Puppy Name? Let select one from our list!