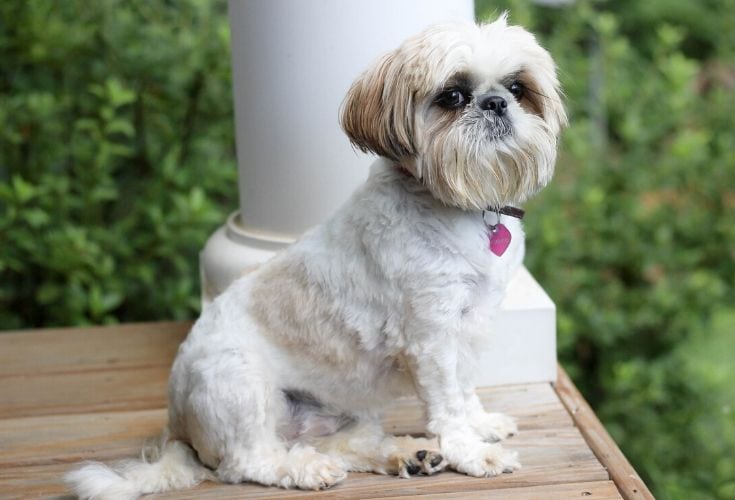 The Shiffon comes from a breeding between the Shih Tzu and the Brussels Griffon. He is a small mixed or cross breed with a life span of 12 to 15 years. He is also called a Silky Jack Russell and is a friendly if sometimes rambunctious little dog!

The Shiffon is a great companion dog but he does need early socialization. He will be loving and protective and despite his small size would try to help you should you be threatened. He does bark a lot and can be rambunctious at times but that is just part of his energy and personality.

Where does the Shiffon come from?

The Shiffon is also referred to as a designer dog and was bred in the U.S in the last 10 years where many designer dogs are bred and are gaining popularity. This is not a purebred dog, he is a a mix of two purebreds as are most designer breeds. While not recognized therefore by the AKC he is recognized by the American Canine Hybrid Club, the Designer Dogs Kennel Club and a number of others designer dog registries. There are no origins known for this dog as is the case with a lot of designer dogs. Take care what breeders you buy from as these have attracted a lot of puppy mills and bad breeders. Here is a look at the parents to get an idea of what goes into the Shiffon though remember anything could happen with genetics in first generation breeding.

The Shih-Tzu is thought to be in the top 14 oldest breeds around, coming from either Tibet or China. They were treasured as companion dogs and can be found in paintings and documents across Tibetan and Chinese history. They were referred to as little lion dogs and were docile, intelligent and happy. The first breeding pair to leave China and come to England happened in 1928. In 1969 he was recognized as a breed by the American Kennel Club.

The Shih-Tzu today is still very much a companion dog. He wants to please and be with you, he is very affectionate and loves to receive it too. He will spend as much time as he can in your lap and is a happy little dog when he has lots of attention. He can be lively and likes to play and is friendly too.

The Shiffon is a lovable, sweet but rambunctious and playful dog. He can be protective but is also quite spirited. He is a cheerful dog who can be charming and affectionate and eager to please. While he is suspicious of strangers when he has warmed up to them he is friendly. He loves to get attention and can get jealous if your attention is elsewhere or your time being taken up by other people or pets getting your affection! He is intelligent but he can be territorial and that can make him irritated or aggressive.

He is a small dog weighing 8 to 15 pounds and standing 8 to 11 inches tall. He has a round face, dark round eyes, a round often black snout and floppy ears that have long hair on them. His body is well defined and covered in a coat that could be like the Brussels or the Shih Tzu. It could be long, silky and fine, short and wiry or even a mix. He may also have a beard like the Griffon. Common colors include cream, red, black, tan and white.

How active does the Shiffon need to be?

This is a fairly active dog but his small size means the sum of his exercise does not amount to a lot! He would enjoy trips to a dog park where he can run free and then daily walks each day. If he does not get enough exercise he can become destructive and highly strung. He is well suited to living in an apartment due to his size though access to a yard where he can play is a bonus. His play indoors will also be a part of his activity.

The Shiffon is a moderately easy dog to train so while he will not be a lot faster to train than some dogs, he will also not be slower to train than the majority of dogs. Results will be gradual with some patience and consistency. Stay firm but be positive using treats, rewards and praise to encourage him. Early socialization and training are important so do not be tempted to skip it just because he is a small dog. His behavior and happiness will be much improved as a result of it. He can be stubborn sometimes and have small dog syndrome and this would help. Since some Shiffon are barkers you can also work on controlling this. House training him is usually a bit harder though so stay with it.

He has moderate needs, his shedding is low to moderate depending on the coat he has. A longer coat too will need more brushing to keep it free of tangles. His face and beard will need a wipe down to remove food and such. Give him a bath as he needs it, this will usually meal about once a month. Check and wipe his ears clean once a week and brush his teeth two to three times a week. His nail should be clipped when they get too long taking care not to cut too low through the quick as that can cause pain and bleeding. If he has a long coat it will need regular trimming at a groomers so you could have the nails done too if it is not something you want to take on.

This is usually a dog suitable for home with children though older ones are best as he is a small dog and young children can be a bit rough when they touch or play. He can be playful and affectionate with them but for best results you should always socialize and train early. If the Brussels Griffon is strong in him though he may need more help. It also helps for the Shiffon to be raised with them. He can try to dominate larger dogs so again his socialization needs to include how to react to other dogs of different sizes.

The Shiffon can be anything from an occasional to frequent barker so training may be an important factor in controlling that. He would act to protect and guard the family if it was needed. He should be fed ½ to 1 cup of good quality dry dog food a day split into two meals.

Health concerns the Shiffon could inherit from his parents include Patellar luxation, Eye problems, Kidney and bladder problems, umbilical hernia, liver problems, Hip dysplasia, allergies, ear infections, dental problems, snuffles and reverse sneezing. To avoid this you should ask to see parental health clearances and always visit the puppy before you buy to check on his living conditions and also see how the other animals there are in terms of health and cleanliness.

Costs involved in owning a Shiffon

Looking for a Shiffon Puppy Name? Let select one from our list!