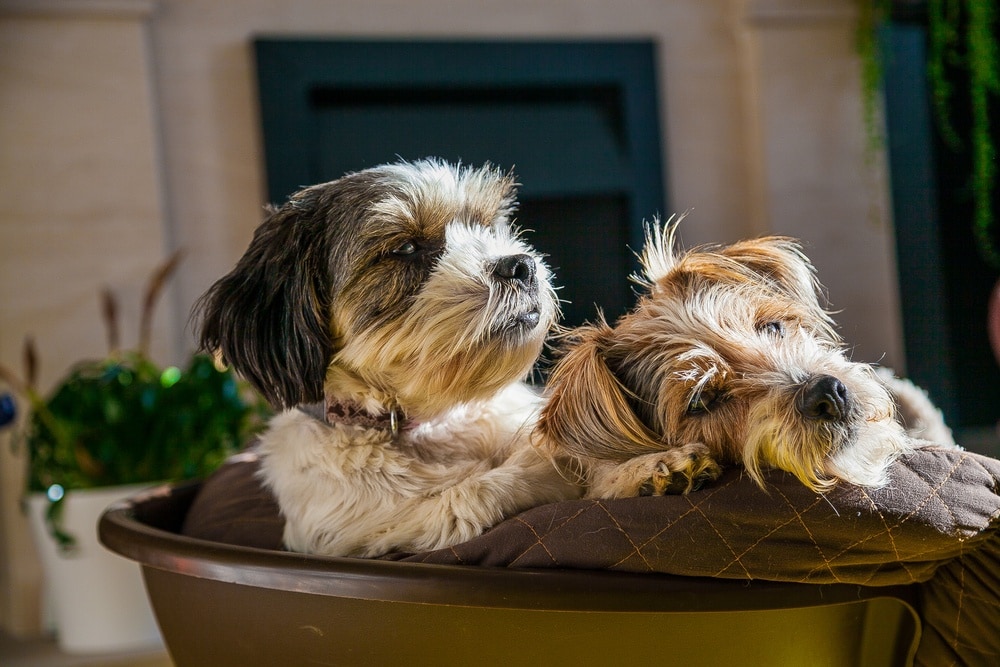 The Shih Apso is a small cross or mixed breed whose parents are purebreds, the Lhasa Apso and the Shih Tzu. She is also sometimes called the Shih-Apso, Lhasa Tzu, Shihapso, Lhasatzu or Lhasa-Tzu. Her life span averages between 12 to 15 years and she is a very loyal but sometimes jealous companion dog.

The Shih Apso could be a good family dog or companion for most people as she does not require a lot of activity outside each day, or a big space to live in. She does need early socialization though and training may be tricky. She will be very loyal and sometimes possessive of you but she is easy to love and is certainly a dog with her own unique character.

Where does the Shih Apso come from?

The Shih Apso is a designer dog. These are a big trend amongst the public and the famous and has grown in popularity over the last two decades. Most designer dogs are mixed dogs created breeding two purebreds together and a lot have names that are blended too. There are some thoughtful breeders who are doing this with some care and there are a lot who are not. Make sure you are not funding puppy mills and bad breeders who are just in it for profit. With no information on the Shih Apso we can look instead at the parents to have some idea of what goes into her.

The Lhasa Apso is considered a sacred dog in Tibet. His name comes from Lhasa the holy city there. He has been around for thousands of years and was not a dog owned by common people until very recently. He was bred by nobility and monks only and his purpose was to protect and guard them. The Dalai Lama has gifted pairs of this dog to people in other countries he deemed worthy, and that was the only way the dog was allowed to leave Tibet. The dog was believed to bring good fortune and prosperity. He came to America in 1933 when a pair were gifted to a naturalist and world traveler. He then used them as his foundation for a kennel.

The Lhasa Apso today is still very much a protector and watchdog. He will remain aloof with strangers until he gets used to them and judges they are not a threat. He does take longer to mature than most dogs and has an interesting mix of traits being playful but regal, happy and fierce, devoted but independent. He has to be taught and reminded often who is pack leader. He does not require a lot of activity. While he is independent he will follow you to stay close to you.

The Shih Apso is a smart but sometimes stubborn dog who can also suffer from separation anxiety if left alone for long periods. She is a loving and protective companion too though and loves to sit in your lap and get lots of attention. She does have a jealous streak and can also be moody. She is energetic and eager to please and often can be quite bold. She is friendly but wary and standoffish with strangers. She will likely follow you around when she is not exhibiting her independent side and will bond closely with her owners.

She is a small dog weighing 12 to 18 pounds and measuring 9 to 12 inches tall. She has a shorter nose than the Lhasa Apso but longer than the Shih Tzu. She can have a squashed face and may also have long hair around the face including a mustache. Her ears are floppy and she has a short tail. Her coat can be like either parents or a mix. Long and silky with a wave to it or a rougher coat. Common colors are white, tan, gray, fawn and black. Often she has a smaller head on a slightly bigger body.

How active does the Shih Apso need to be?

She does have some energy and can be lively but being small she does not have huge needs. Her indoor play will go towards some of those and then about 20 minutes a day of walks should be enough. She would enjoy the occasional trip to a dog park too and she can live in an apartment because of her size. A yard while a nice bonus place to play and be curious in is not a requirement.

She is intelligent and can learn but has a stubborn side and can be moderately difficult when it comes to training. She might therefore need more perseverance and patience than some dogs. It is important to stick with it though and stay calm and positive. Use rewards, treats and praise to motivate her and avoid scolding or becoming impatient. Early training and socialization are important for all dogs. With it she will be a much better and happier dog. If you need to use an obedience school or professional trainer do so.

Living with a Shih Apso

She can shed anywhere from a low to moderate amount and her coat will need regular brushing to keep it tangle free and looking healthy and clean. With a long coat she will need it trimmed regularly at a groomers or you could have it trimmed shorter which would need less brushing from you. A bath once a month or just as she needs one is good enough making sure you use a dog shampoo only. Her nails will need clipping when they get too long but that is something that takes the right tool and some knowledge. Dog nails are not like our own so if you are unsure about doing it have the groomer do it for you, or ask them or the vet to show you how. Her ears should be checked for infection and wiped clean once a week and her teeth should be brushed two to three times a week.

She does need early socialization and training but can be great with older children, other animals and dogs. Younger children might need supervision because they tend to be more clumsy and with smaller dogs that can be a problem.

This is not a very noisy dog but she does bark occasionally and she will try to defend you and protect her territory if it is threatened. She should be fed ½ to 1 cup of dry dog food a day split into two meals. She does better in climates that are cooler.

She can have problems that either parent can have such as Eye problems, Patellar Luxation, Kidney & bladder problems, Skin problems, Liver problems, Umbilical hernia, Allergies, Hip dysplasia, Ear infections, Dental problems, snuffles and reverse sneezing. A way to improve your chances at having an issue free dog is to buy from a breeder who can show you health clearances for both parents. Also it really helps to visit the puppy before buying to check the conditions it is kept in.

Looking for a Shih Apso Puppy Name? Let select one from our list!