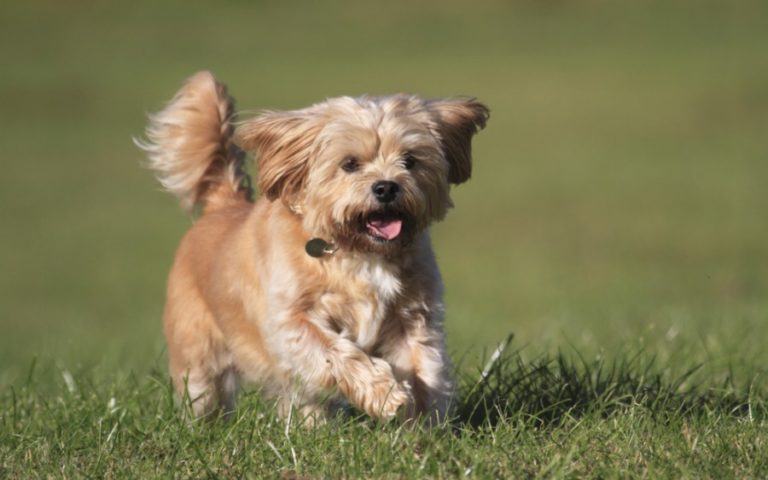 The Shorkie Tzu is a small cross with a life span of 13 to 16 years. His parents are purebred dogs, the Shih Tzu and the Yorkshire Terrier. He is a mellow and loyal mixed dog well suited to most owners, even potentially ones with allergies.

The Shorkie Tzu is a loyal dog who would be great for most people looking for a small lapdog type companion. He is happy and affectionate and will make you smile with his antics. He does not need a yard or a lot of outdoor time but his house training may require more patience as he can take longer than many other dogs in this respect.

Where does the Shorkie Tzu come from?

The Shorkie Tzu is a deliberately bred mixed dog, one of many in a group now referred to as Designer dogs. It is understood that he like a lot of these dogs was first bred in the United States. The intention was to probably to create an attractive lapdog who is friendly and smart and possibly hypoallergenic. Some breeders intend to take him past first generation breeding and enter the stages necessary to create eventually a purebred dog. When buying a designer dog be careful to research the breeder carefully first as there are a lot of puppy mills and bad breeders out there that have used this trend as a means to make money. Also keep in mind that with first generation dogs there is little control that can be had over the genes so the looks and personalities can vary even in the same litter.

The Shorkie Tzu is a sweet and affectionate dog who loves to be with people and loves to have fun and play. He can be shy and mellow but he can also be strong willed. He loves to receive attention and affection and he is quite sensitive. He does not like being left alone for long periods of time. He is often very dedicated to his owner and can be energetic.

He is a small dog weighing 7 to 15 pounds and measuring 6 to 14 inches tall. He can look like either parent and his coat can be medium to long, silky and soft. Common colors are golden, brown, tan and black though other colors or combinations are possible.

How active does the Shorkie Tzu need to be?

The Shorkie Tzu is just slightly active so he is small enough to be happy in an apartment and could be a good choice for owners who are not able to be too active. He can be energetic and playful and his indoor play with his toys and you is a part of his mental and physical exercise. He also needs some time outside but a couple of short walks is sufficient. He would enjoy the occasional trip to a dog park though or a place where he can be social and run free in safety. He is very quick so make sure he is in a secure area or very well trained. He loves especially to play with a small ball.

Shorkies are usually moderately easy to train but some can be strong willed and they can have shorter attention spans so sessions need to be kept short and interesting. Be firm but fair and consistent and use positive techniques like rewards, praise and treats. He is sensitive so impatient and scolding are not going to work for him. House training can be harder though so expect that to take longer. Do not neglect early training and socialization just because he is small, it is still very important for him and for you.

Living with a Shorkie Tzu

He has moderate needs when it comes to grooming. His coat can tangle easily so daily brushing is needed. This will also keep it looking healthy and remove small debris. A bath should be given to him when he needs it and only a dog shampoo should be used. You may need to wipe his face daily to take care of tear stains. Taking him to a groomers to have him trimmed every 6 to 8 weeks is a good idea. They can also take care of his toe nails when they get too long. If his coat is like the Yorkies it will be low shedding and hypoallergenic. If it is more like the Shih-Tzu it may shed a bit more and is not hypoallergenic. Brush his teeth two to three times a week and check and wipe his ears once a week.

He barks occasionally though some owners find he barks more often than that but training can help. He is alert and will bark to let you know of an intruder. He should be fed ½ to 1 cup of good quality dry dog food a day split into two meals.

The Shorkie Tzu could inherit health issues from his parents such as Patellar Luxation, eye problems, kidney and bladder problems, liver problems, Umbilical hernia, PSS, hypoglycemia, collapsed trachea, Allergies, Hip dysplasia, ear infections, dental problems, reverse sneezing and snuffles. Ask the breeder to show you health clearances for both parents to lessen the risk. Also visit the puppy before buying to see the conditions he is raised in.

The Shorkie Tzu puppy could cost between $375 to $1750. Other costs include a carrier, crate, collar and leash, deworming, blood tests, shots, micro chipping and neautering and they come to between $360 to $400. Yearly basic medical needs like check ups, shots, flea prevetion and pet insurance come to between $435 to $535. Other yearly costs for things like food, treats, licsens, toys, training and grooming come to between $530 to $630.

Looking for a Shorkie Tzu Puppy Name? Let select one from our list!