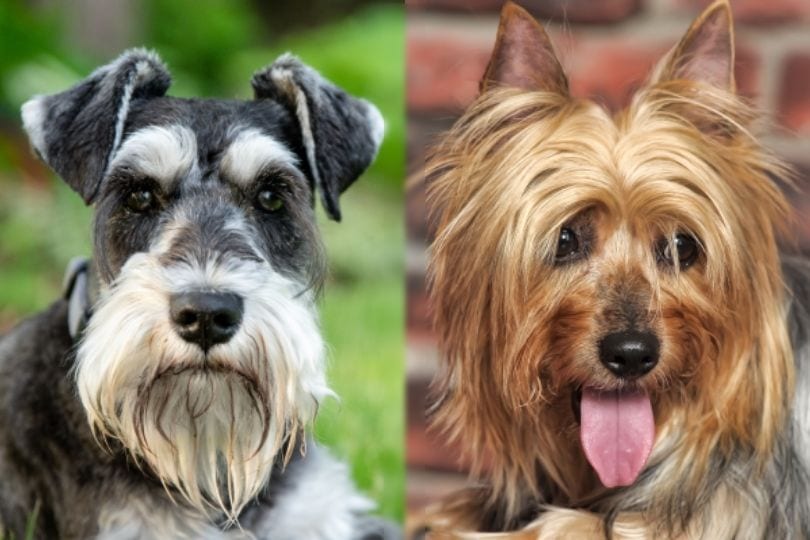 Where does the Silkzer come from?

A Silkzer as well as being called a mixed, cross or hybrid dog is also a designer dog. This is a term given to the purposely bred mixed dogs that have risen in popularity over the last 5 decades, though more so in the last ten years. There is some controversy about these dogs. The concern being a lot of puppy mills and bad breeders are breeding them with no skill or care because they are a big money maker. Therefore it is important to be careful about where you buy from. With designer dogs there can be differences between one dog to another even in the same litter. As with many of these newer mixed dogs there is not any information about its origins so to get a better feel for the Silkzer here is a look at the parents.

There are differences from that one and the one we have today. Then they came in several colors but today are silver and black. He is a very social dog always wanting to be part of family activities. He likes to be close to you and will arrange himself so he is touching you when sitting. He is a feisty, needy dog who is intelligent and easy to train. He can be willful and will try to manipulate you.

In the late 19th century in Australia the Silky Terrier was developed by crossing the Yorkshire Terrier with a native terrier dog. He was both a hunting dog (for vermin) and a companion. Back then it was common for some to look more like one terrier or the other but eventually their look became more uniform as they are now. Eventually an agreed standard was reached in 1926. In 1955 his name in Australia became the Australian Silky Terrier and it remains that now. In the US though he is known just as the Silky Terrier.

He is a friendly, smart and lively dog with a lot of self confidence. He still likes to chase small animals and he is alert. Though he is independent he is still very loyal and loves to be around people. He also travels very well.

The Silkzer is a lively and outgoing dog, very friendly and happy. He loves to play but can also be quiet at times and loves a cuddle. His affectionate and easy going character means he is very adaptable to different situations. He likes to please and is happiest when you are playing with him and lavishing affection and attention on him. He is intelligent too.

He is a small dog weighing 8 to 15 pounds and stands 9 to 14 inches tall. His coat is double, can be medium to long in length, soft, wavy or straight, it really depends on which parent his coat takes more after. Common colors are blue, red, black, tan, white, brown and cream. His ears are pointy.

How active does the Silkzer need to be?

Silkzers are just slightly active so not much exercising is needed to keep him happy making a good option for owners who themselves are not that active. It means he is good for apartment living with his size. He does not need a yard though is there is one that is a bonus place for him to explore and play. About a half an hour a day of walking should be enough on top of his indoor play. He would enjoy going to a dog park where he can have time off leash and play with you.

He tends to listen quite well and since he is smart and eager to please he is usually easy to train. He may even need less repetition than other dogs. Your approach though is key. You need to be firm and consistent but stay positive. Treats, encouragement and praise are going to get better results than getting cross. Be patient with him, make it clear you are boss and don’t let him try to use his cuteness to get away with any nonsense! Also include early socialization with your training to develop him into the best dog he can be. You will be a happier owner and he will be a happier dog.

There will be some grooming and maintenance needs for the Silkzer, if he has a long coat it will be higher. He will need regular care, daily brushing to keep his coat tangle free and trimming at a groomers several times a year. He will need a bath just when he is really dirty so that you do not damage his natural oils. He is likely to need some trimming around the face too. A coat like the Silky Terrier will mat very easily and takes some commitment to look after.

His teeth need to be brushed at least two to three times a week. His ears should be checked for infection and wiped clean once a week. His nails need to be clipped when they get too long. There are live vessels and nerves in the lower part of dog nails. If you are not comfortable about where to safely cut so you do not hurt him and cause bleeding have the groomer do it for you.

This dog is one that really needs socialization to help him get along better with children, other dogs and other animals. He is great with people but in these areas he tends to need help. He is also fine with children if he has been raised along with them. He does like to chase small animals with a high prey drive and sometimes they do not get along well with other dogs. Therefore supervision in places like a dog park is important.

His barking tends to be rare though some may be more occasional. He will need to be fed ½ to 1 cup of a good quality dry dog food each day that is split into at least two meals.

Costs involved in owning a Silkzer

A Silkzer puppy is not a common dog to find so prices are not currently available to get a range from. Other costs such as initial medical tests like blood tests, deworming, a physical exam, micro chipping, neutering and vaccinations come to about $280. Other basics like a crate, carrier, collar, leash and food bowls come to about $150. Annual non-medical costs for grooming, training, license, food, toys and treats come to between $535 and $635. Annual medical costs for check ups, shots, flea prevention and pet insurance come to between $435 to $535.

Looking for a Silkzer Puppy Name? Let select one from our list!

A Silkzer is a great companion dog, best suited to a single or couple owner though he can learn to get along better with children and other pets with good socialization. He is a very friendly and happy dog but keep him on a leash when out with him in case he does not react well to seeing other dogs. Only let him off at a dog park if he has been well socialized.