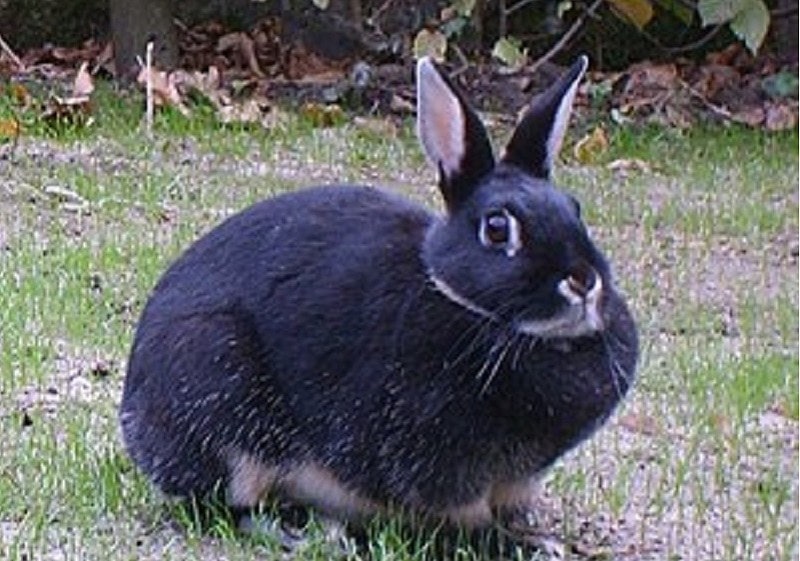 One of the smallest breeds with a commercial body type, the Silver Marten rabbit was created by mixing tan and black rabbits with chinchillas. This was done to enhance the fur of the chinchillas but ended up being the basis of an entirely new rabbit breed. First created in 1921, Silver Marten rabbits are some of the softest and most striking of all domestic rabbits.

There are approximately 350 breeds of domesticated rabbits that humans keep as pets, but Silver Marten rabbits are some of the most easily recognizable. They’re beautiful bunnies, with ultra-soft coats that are black on the top of the rabbit and silver on the underside.

Though Silver Marten rabbits have been around since the early 1900s, they’re a rather rare breed. They’re considered small for rabbits with a commercial body type, reaching a maximum weight of 9.5 pounds.

Shortly after the creation of the breed, the first club based around it was formed in 1927. Soon, additional color varieties became accepted, including blue and sable. Though these rabbits can make great pets, they’re most often used in pet and agricultural shows, where they often make their way to the “best in show” table due to their beautiful looks and elegance. Still, they’re often regarded as charming and lovable pets, even if they’re not commonly kept as such. They are also often kept for meat production, as their meat is considered tasty and they produce quite a lot at an average of 8 pounds per rabbit.

These rabbits are known for being very hardy and resilient. They’re suitable for all weather conditions and can handle cold winters as well as hot summers.

How Much Do Silver Marten Rabbits Cost?

Silver Marten rabbits can be quite difficult to find. But if you manage to locate some that are available for purchase, they won’t cost you too much. On average, you’ll spend about $30-$60 for a quality Silver Marten rabbit. Of course, rabbits with a proven bloodline that has been winning pet and agricultural shows could cost considerably more.

Silver Marten rabbits are considered excellent pets because they have calm, playful personalities and are easy to care for. Compared to other rabbits that are commonly kept as pets, Silver Martens can be timid and shy, though they will open up as they become more comfortable with you. They like to play and will throw their toys around their enclosure for fun when they’re comfortable.

There are four accepted varieties of Silver Marten rabbits. They are black, blue, chocolate, and sable. All of them will have silver or white undersides, including their bellies, chins, and tails. Additionally, white or silver will be found inside the ears, around the eyes, and as nostril markings. You might even see some ticking up the rabbit’s sides.

These rabbits have incredibly soft and very shiny coats and small ears that stick upright adorn their heads. They have a striking appearance that often helps them win best in show.

How to Take Care of Silver Marten Rabbit

If you want to keep a Silver Marten rabbit, there are some things you’ll want to be aware of.

Silver Marten rabbits need a good bit of space. Their enclosure must be at least 12 square feet. Additionally, they need a safe place where they can get exercise and stretch their legs. This area must be at least 30 square feet. The enclosure can be kept indoors or outside, as Silver Marten rabbits are resilient and can handle all types of weather conditions. That said, if you keep your Silver Marten outside, it will need a safe and dry area where it can escape inclement weather and any predators.

Two excellent choices that are commonly used are puppy pens and rabbit condos. Puppy pens are simple and provide plenty of space while rabbit condos can give your rabbit multiple levels of living area in a compact setup that takes up less of your personal space.

To keep your rabbit’s enclosure clean, you’ll need to ensure that any waste can be easily and quickly removed. You’ll want to line the bottom of the enclosure with newspaper. Additionally, a soft substrate will provide comfort for your rabbit. Recycled paper that’s shredded makes a great substrate that’s easy to clean and inexpensive.

Silver Marten rabbits don’t require any special lighting. Instead, you can simply rely on the light in your home or the sun if your rabbit stays outside. This will ensure that your rabbit is on a standardized schedule that follows the natural patterns of the seasons.

Do Silver Marten Rabbits Get Along with Other Pets?

Not all pets get along with other types of animals, but Silver Marten rabbits are pretty friendly creatures. The only issue is that they’re also quite timid and shy, so getting your rabbit to open up to another animal could prove difficult.

These rabbits have been known to befriend several different species. It’s not uncommon to see them becoming friendly with many common pets and livestock, including dogs, chickens, goats, geese, other rabbits, cats, guinea pigs, birds, and ferrets.

Still, you need to be very careful when introducing your rabbit to other creatures; especially ones that are natural predators like cats and dogs. Your rabbit will be naturally wary of these animals, and if your dog or cat has a strong prey drive, they might never mix safely.

What to Feed Your Silver Marten Rabbit

Silver Marten rabbits are herbivores through and through. But their diets aren’t very varied. About 70% of a Silver Marten’s diet consists strictly of hay. If your rabbit doesn’t get enough hay, it can result in incisors that grow too big for its face and jaw, which will then need to be shaved down by a veterinarian.

Of course, hay can’t provide all of the nutrients your rabbit needs. Other foods that make up the remaining 30% of your rabbit’s diet can include leafy greens, fruits, vegetables, and commercial pellet foods made specifically for rabbits.

You still want to be careful about what veggies and fruits you offer your Silver Marten. Certain foods like iceberg lettuce don’t contain many nutrients. Other foods, including many fruits, have too much sugar to be healthy for your rabbit. You can still feed these in small doses as occasional treats, but they shouldn’t be a staple in your rabbit’s diet.

For the most part, Silver Marten rabbits are considered to be hardy and resilient. Still, two common problems affect them — ear mites and flystrike.

Flystrike happens when your rabbit’s fur is soiled. It’s most common in summer. Flies will lay their eggs in your rabbit’s soiled fur. As the larvae hatch, they begin to eat your rabbit alive. This requires immediate veterinarian assistance. Symptoms include loss of appetite, reduced waste, and obvious pain.

Ear mites are also quite common in Silver Martens but are pretty easy to treat. It’s recommended that every Silver Marten receives a pea-sized dosage of deworming paste every spring and autumn to maintain peak health.

Breeding rabbits is an incredibly simple process. If you keep a male and female rabbit together, then you probably won’t have to do anything; they’ll likely take care of it for you. But if you keep your male and female separate, you’ll have just two steps to complete.

First, you must put the female in the male’s enclosure. Never put the male in your female’s enclosure because females are far more territorial and she might attack the male that she sees as an intruder.

Once your rabbits are together, just let them be. They’ll likely run circles around each other for a while. Then, if the female sees fit, she will lift her tail, causing the male to mount her before falling off. This will happen several times. Afterward, you can remove the female and put her back in her own space.

For enhanced chances of a large litter, bring the female back to the male about 10 hours later. Breeding stimulates ovulation in female rabbits, so the second breeding will have higher chances of success than the first.

Are Silver Marten Rabbits Suitable For You?

Silver Marten rabbits make excellent pets. If you’re looking for an ultra-soft and cuddly pet that’s like an animated stuffed animal requiring care, then a Silver Marten is perfect for you. They’re strikingly beautiful and rather easy to keep. However, you might have difficulty finding one as they’re not the most common rabbit breed.

Still, keeping a Silver Marten as a pet can be a very rewarding experience, and you can even enter them into shows with a good chance of a solid placing. If you locate a Silver Marten, it likely won’t cost more than about $60, though you’ll still need to provide ample space and safety. Luckily, food is easy and doesn’t require much thought since 70% of a Silver Marten’s diet consists of hay.

Interested in learning more about different breeds of rabbits? Check out these!