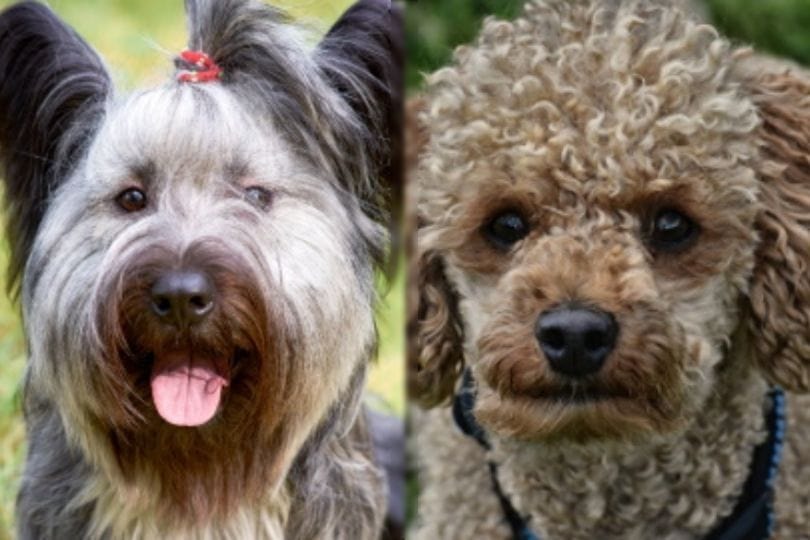 The Skypoo is a medium to large sized mixed dog who’s parents are the Poodle (Standard or Miniature) and the Skye Terrier. He is also known as the Skyedoodle, Skydoodle and Skyepoo. He has a life expectancy of 12 to 15 years and is a very loyal and faithful dog with a charming personality.

The Skypoo has a lot to offer the right home. He is charming and faithful and will offer you a lot of affection. He will not need lot of vigorous exercise and he is not hard to train so he is good for almost anybody but he will need early socialization to help him interact more positively with children and other animals.

Where does the Skypoo come from?

The Skypoo is an example of a designer dog. These are dogs that are mix or cross breeds using most often two purebreds. Many are given a name that blends those two parents names together as with the Skypoo. Some have been bred with some thought or reason but a lot have not and it has caused a large problem as it has attracted poor and disreputable breeders and puppy mills who are making money from this trend and have little care for their animals. Take care who you buy from if a Skypoo is the dog you want.

Most Designer dogs have no origins to tell and the Skypoo is the same. To better understand him we can take a brief look at the parents to get a feel for them. However it is important to know that guarantees cannot be made with this kind of breeding. Your Skypoo may have the best of both parents but he may also have something else!

The Skye Terrier comes from the Isle of Skye in Scotland and is about 400 years old. He was bred to be a hunting dog and would follow animals like the otter, badger and fox into their dens and pull them out and kill them. His legs were bred to be short to dig his way in to them and his double coat designed to protect him from thorns, brush and the bites of the animals he hunted. It also offered protection against the cold Scottish weather. He was recognized in America in 1887 but remains a rare breed there.

Today he is a brave dog still and loyal to his family but is cautious around other people. He is a good watchdog and is intelligent. He can be sensitive and would remember any harsh treatment for a long time. He is willful sometimes but likes to be a part of the family and needs a certain amount of attention or he can act out.

The Skypoo is a loyal dog, very faithful and eager to please their owner. He loves getting attention and is friendly and charming to everyone. He makes a great family dog or companion for a couple or single.

He is a somewhat smart dog and as well as loving company which means he’s prefer not being left alone, he can also be playful, fun and lively.

He is a medium to large dog weighing 35 to 70 pounds and standing 8 to 15 inches tall. He has a body that is well proportioned, floppy ears, a short muzzle and black nose and almond shaped dark eyes. His coat is thick, straight to wavy, fluffy and soft. His usual color is cream or white.

How active does the Skypoo need to be?

He can be lively and playful and he is slightly to fairly active needing an average amount of physical activity a day to keep him happy and healthy. A couple of walks a day, occasional trips to a dog park, play in the yard if there is one are all good things to do. Do not forget to give him some mental stimulation to keep his mind active too.

He is not one of the smartest dogs there are but he has moderate intelligence. However he is still very trainable because he is so eager to please. Keep firm and consistent but be positive and use things like treats and praise to keep him motivated and happy. Early training and socialization are key to help his interactions with other animals and people and to deal with different locations and situations in a even tempered way. Many Skypoos will actually train quicker than other dogs as they will need less repetition before being able to move on to the next stage of training.

Depending on the coat he can be low to moderate in shedding and grooming and could be hypoallergenic if he takes more after the Poodle but that would need to be tested. Brush him daily to keep away the tangles and burrs, and then bathe him just when he needs it. Use a dog shampoo only to avoid drying out his skin. He should have his ears checked and wiped clean once a week to avoid ear infections. His nails should be clipped when they get too long but this is not a simple process, dog nails are not like ours so get some advice if you have not done it before, or have the groomer do it for you. Finally his teeth need to be taken care of by brushing at least two to three times a week.

Early socialization really helps him get along better with children and other pets and other dogs. They also do a lot better if raised with them. Make sure you teach the children how to interact with dogs in a safe and acceptable way.

He is not a great dog if you want one to be a watchdog for you. He barks occasionally but not always when an intruder enter the home. He will need to be fed 2 1/2 to 3 cups of good quality dry dog food a say. This should be divided into at least two meals for him.

The Skypoo can inherit health issues from his parents and these include Patellar luxation, Addisons, Cushings, Von Willebrands, hypothyroidism, epilepsy, bloat, eye problems, Legg-Perthes, Hip dysplasia, skin problems and orthopedic problems. The best way to lower your chances at having a dog with hereditary health problems is to ask for health clearances from the breeder for the parents before you buy the puppy. Visiting the puppy and seeing the health of the other dogs at the breeders and how clean the conditions are is also a good idea.

Costs involved in owning a Skypoo

This is a newer designer dog and a rare one to find at the moment so prices for a puppy were not available at the time of writing this article. Other costs to be prepared for include a crate, collar and leash, blood tests, deworming, shots, neutering and micro chipping which come to around $450 to $500. Yearly medical basics such as check ups, flea prevention, pet insurance and vaccinations come to between $485 to $600. Yearly costs for non medical basics like food, toys, treats, license and training come to between $585 to $700.

Looking for a Skypoo Puppy Name? Let select one from our list!