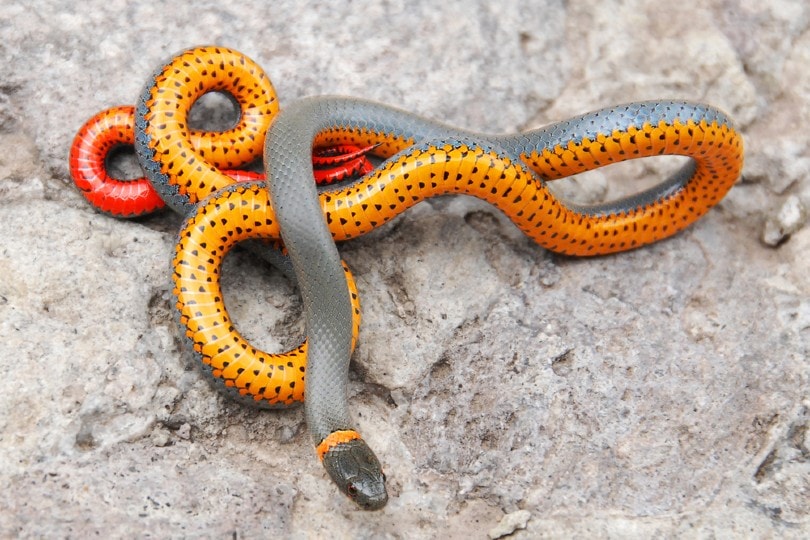 What comes up in most people’s minds when they envision pet snakes are giant Anacondas, fearsome cobras, and enormous pythons. For many reasons, such snakes with muscular bodies intimidate people and make their skins crawl. But the truth is that not all pet snakes are larger than life.

You can find snakes that stay little forever, one to teach you a few things about responsibility and easy to take care of. Plus, it’s hard to be afraid of a little slithering pet that fits right into your palms.

Snakes that stay on the small side make excellent pets. Keep reading and discover some of them.

Why a Small Pet Snake Could Be Right For You

Although pet snakes have varying costs depending on the type, you may end up spending a fortune to buy the smallest of all.  But one sure thing is that it’ll exempt you from the accompanying extra expenses on the enclosure, decorations, and heating elements. Plus, small snakes don’t eat much like giant snakes, so you’ll spend less on food.

You must remember that any animal with a mouth and teeth can inflict injury. However, small snakes are usually docile and are incapable of inflicting severe damage. The worst-case scenario is a harmless tiny love bite.

The snakes’ sizes can’t allow them to constrict humans or other animals to death, which means you won’t experience an injury at any point. Plus, you won’t pull a muscle while handling small snakes as you would a giant serpent.

Snakes don’t shed like other pets, so you don’t have to worry about sneezing fits or too much cleaning. These reptiles are also odor-free because they are easy to clean after.

They also don’t poop and urinate frequently, and if they do, it’s in designated areas.

Snakes are cold-blooded, meaning they can’t regulate their temperatures internally and require you to ensure they are warm and the enclosure is not too humid.

These conditions, with husbandry issues, affect smaller snakes more than giant serpents, and you’ll be lucky if you notice symptoms like mucous or retained sheds early. Similarly, their tiny bodies are prone to injuries, attacks from live rodents, and mishandling by children.

Most small snake species require specialized diets and care. You should be ready to offer them prey, which may need you to designate freezer prey to store their frozen game.

Feeding difficulties can be a real problem, and you may need a feeding demonstration from a breeder before taking your pet home.

Some of these snakes are unmatched escape artists, and they do so efficiently through small cracks and openings. Unfortunately, it can be hard to locate them due to their small sizes.

Since these pets can virtually fit through any opening, ensure that your snake’s enclosure is escape-proof.

Rosy Boa snakes are also known as “trivirgata” in Latin, which translates to “three stripes.” Most of these snakes have three stripes- orange, brown, and black-that running down their bodies. However, you can still find them in other morphs depending on the locality.

Rosy Boas are gorgeous little snakes that are easy to take care of, except for the extra attention when maintaining their temperatures. Unfortunately, high humidity in their enclosures can cause respiratory and fungal issues.

These snakes enjoy climbing and burrowing.

Corn snakes are some of the most popular small pet snakes, especially among beginner snake keepers. Selective breeding allows breeders to develop these snakes to virtually any color you’d want, although you’ll naturally find them in orange shades.

These small pets are generally affordable, easy to maintain, and rarely have feeding issues in captivity. Corn snakes are not fast-moving and are ground snakes, so they love to burrow.

Milk snakes are among the widespread small snake species in pet stores because of their striking coloration and sweet temperaments.

These snakes generally appear small, even if some can be up to four feet long due to their very small girths. They can be your go-to reptiles for a compromise, that is, if you want a “large but small” snake.

Some of these species have red, black, and yellow bands that mimic poisonous coral snakes. However, Milk snakes are generally not dangerous.

This species’ popularity has increased over the years due to their distinctive facial features and sizes that make them adorable. Western Hognose snakes have a stout body and upturned snouts (nose), giving them a pig-like appearance.

Western Hognose snakes thrive on toads and amphibians as their natural diet when not in captivity. This diet makes it difficult to make a neonate Western Hognose interested in mice when in captivity. However, they can get used to it over time. They are agreeable snakes for first-time keepers.

These small boas are native to Northern Africa, and you can pick that they love burrowing in the sand from their name. Kenyan Sand Boas remain small, and their cages require minimum decorations.

The Barbados Threadsnake is not only small but one of the smallest snakes on earth-not thicker than a strand of spaghetti. You can only find these snakes on a few selected Caribbean Islands.

Although Barbados Threadsnakes are rarely kept as pet snakes, they are among the breeds that stay small.

You may know that most snakes hunt prey like rodents, birds, and amphibians. The problem is that such prey is, of course, too big for the Barbados Threadsnake. Instead, these snakes limit their diet primarily to ant and termite eggs.

The Bimini Blindsnake is not much bigger either; you can mistake it for an earthworm. These snakes are not the most interactive or involved pet reptiles, but they are common in the pet world, thanks to their sizes.

Bimini Blindsnakes are not blind even though they have “blind” in their name. It’s just that their eyes are teeny tiny to be seen. The longest Blindsnake can grow up to 6 inches and weigh only about one gram.

You can distinguish a Ringneck snake by an orange or yellow band around the neck. Ringneck snakes are among the tiniest snakes on earth; you may mistake them for earthworms. These snakes have a bright orange and yellow underside, while the upper side can range from grey to black.

Ringnecks are slender and smooth, and most people assume they are baby snakes, mainly because their average length is 10-15 inches. They mainly eat small worms and invertebrates.

Children’s snakes may not be familiar, but they are among the fast-rising small pet snakes in pet stores.

These Australian snake species are on the larger side of small snakes and make fantastic companions for novice keepers.  However, you may want to go for the juvenile or adult species because young Children’s pythons are difficult for beginners.

It may look like they are designed for kids, but these reptiles acquired their name from scientist John George Children.

These snakes resemble earthworms, as you can pick from their name. Worn snakes are small, burrowing reptiles with shiny scales and black, grey, or brown backs and pink or whitish bellies.

They are non-venomous, and although they aren’t popular pet snakes yet, they can make excellent pets, owing to their subterranean habits. Worm snakes primarily feed on earthworms.

Snakes are often misunderstood and receive negative attention from most people, but they can make excellent companion pets if given a chance. A small pet snake is even much better because you’ll have a companion that won’t ask much from you – just minimal care.