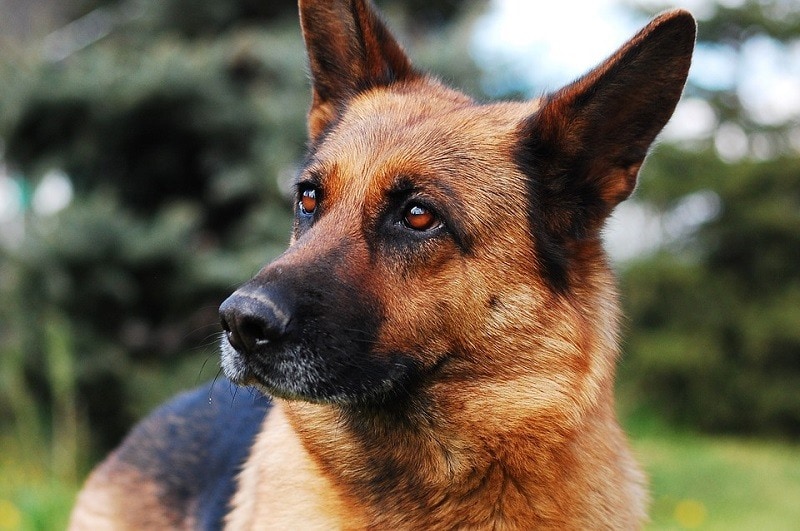 Most people choose smart dog breeds because they believe that they are easier to train. While it is true that a smart dog will usually understand what you are trying to teach them, some may want to do their own thing rather than conform to your ideas. Smart dogs are also more likely to find escape routes and figure out ways to get to their food, and they may, without you noticing, outwit you to get what they want when they want it. If you’re up for the challenge of owning a smart dog, we have listed 15 of the most intelligent ones here.

The Border Collie is not only hyper-intelligent, regularly being described and proven as the most intelligent breed there is, but they are also keen to please and have seemingly boundless reserves of energy.

They will work in the fields for 10-hour days before going on a long walk and playing intense fetch with their human. They are loyal and loving dogs too, and they will learn routines at home without you really even trying to teach them. This shepherding dog retains many of their shepherding instincts, though, and you may find them gently herding the children and small animals in your home.

The Poodle comes in three varieties: toy, miniature, and standard. Although they are different sizes, they share many of the same characteristics. They all have curly hair, which is often described as being hypoallergenic because it sheds minimally and the breed does not produce as much of the protein that causes allergic reactions in allergy sufferers.

They are also all considered to be highly intelligent breeds. They were initially bred as hunting dogs, especially for use retrieving things from the water. Although all Poodle sizes are considered intelligent, it is the combination of intelligence, strength, and stamina that makes the standard Poodle the dog of choice for sports events.

The German Shepherd is always at or near the top of the most popular dog breed lists. They offer an ideal combination of strength, size, and speed, and they meld this with bucketloads of intelligence. Regularly used for police work, employed by the armed forces, and used for activities like search and rescue, the breed is popular all around the world.

They also have the credentials to make a perfect family pet, and they learn and retain information quickly. You need to ensure that they are learning the commands and activities that you want them to and not those that the dog decides are best.

The Golden Retriever is not quite as popular as their short-haired cousin, the Labrador, but is considered more intelligent because they are less comical and more level-headed. As well as being clever, the breed is super friendly and sympathetic to the needs of others. As such, besides being used as guide dogs and for search and rescue, they are popular therapy and rehabilitation dogs.

The Golden Retriever has just about everything that you could want from a family dog. They enjoy walks and days out, play well with the kids, and are happy to curl up with you at night. However, all that fur does tend to blow out, which means you will need to brush the dog and vacuum the floor regularly.

The Belgian Malinois is similar to the German Shepherd. They look alike, and the Malinois is also used for many of the same tasks as their German counterpart. The breed is popular as a police dog, is highly skilled as a guardian dog, and is used by armed forces around the world.

The Malinois is intelligent but can be difficult to handle, and professional and experienced handlers are best left to deal with this breed.

The Doberman has been the most popular choice of protection dogs for many years and for good reasons. Not only are they fiercely loyal to their humans, but the breed is intelligent and can be taught commands and even routines and journeys quickly and easily. They are fast, athletic, and strong.

Once the Doberman learns a command, they will follow it almost without fail, which means that as long as you provide early and ongoing training, the breed also makes a great family pet and an excellent close-protection dog.

The Labrador Retriever shares most of the same traits as the Golden Retriever, except for a few key differences. The first is that the Lab has much shorter hair, and while they do still shed their coat, it  is easier to manage because of the difference in length. The Lab is also considered goofier and more comical than the more level-headed Golden Retriever.

One area where the two are similar is in their intelligence. The Labrador is also used as a search-and-rescue dog and a rehabilitation dog and by the police and armed forces. You will regularly see the Lab deployed as a guide dog.

The Shetland is a cousin to the Collie, and they do share a degree of intelligence with their bigger cousin. They do well in obedience competitions and are sometimes preferred as a family pet because they are smaller and a little easier to manage, while still being intelligent. They are nimble and intelligent dogs.

The Sheltie makes a good family dog, but they do have high energy levels, so you must be prepared to give them physical and mental exercise to keep them stimulated and to ensure that they remain healthy and alert.

The Australian Cattle Dog is related to the wild Dingo. They were bred by English settlers to deal with the heat and challenging terrain, and they have proven to be formidable herding dogs. They are intelligent and will keep massive flocks of animals in line over long distances, usually unsupervised by human handlers.

At home, the breed will pick things up quickly, including commands. This also means that the dog will retain information such as where the food is kept, the actions you take before going for a walk, and more. Consider agility or flyball to help burn off some of that incredible energy.

The Papillon proves that a dog does not need to be a large breed to be intelligent, and this handsome dog has a royal look. They can learn tricks, and you will see them in the performing ring and at dog shows for these reasons. They might be small, but they excel at agility and other canine sports.

The Papillon can make a good family dog, although they can also be nervous or wary around children. However, they do enjoy the attention and seem to have a love of making people smile.

The Pembroke Welsh Corgi is the breed of choice of Queen Elizabeth II of England and of many a Welsh farmer. They might be short but the Corgi packs serious brainpower. They will quickly determine what toys and items belong to them, what they can and cannot do, and their best opportunity to get food and enjoy playtime.

The Corgi is a good choice of a family pet, as long as you are happy to let them have their own things. This is one breed that is usually quite tolerant of being left alone for several hours at a time, so they can be a good breed if you go out to work every day.

The Rottweiler is a formidable-looking dog that is strong and has historically proven to be a formidable guard and watchdog because they are alert, keen, and intelligent. They will learn new commands and can quickly determine who is a friend and who is a foe.

They make good family pets, but you need to be prepared for a strong and iron-willed dog that will move heaven and earth to protect you and your family.

The Miniature Schnauzer is a great companion dog. They can work the fields during the day and curl up with you in the evening. They will learn new tricks and commands quickly and are keen to please their humans, which is a powerful mixture that will make them easy to train as long as you are consistent in your efforts.

The Schnauzer is often seen on the agility course because the breed excels at this sport and it keeps them active and keeps their mind alert.

The English Springer Spaniel is a springer by name and springer by nature. Springing dogs flush birds out of cover so the hunter can shoot them. They do this in fields and rivers, and the Springer is just as happy in water as they are on the field. They will jump from a boat, can largely ignore gunfire with adequate training, and have an exceptional understanding of what their handler wants, even through non-verbal commands.

The Springer Spaniel is energetic and needs a great deal of exercise, but they are also friendly, amiable, and fun dogs. They can make excellent family companions.

The Belgian Tervuren is a breed that has more than a passing resemblance to the German Shepherd. The breed loves to work and is at their most content when presented with a challenging task. They need mental and physical exercise to remain happy and well-rounded.

They do best as working dogs and are especially good as hunting and field dogs. They are intelligent and will look for ways to outsmart their human if they are not given enough exercise and mental stimulation and if their handler does not have enough experience dealing with this kind of dog.

Some dog breeds seem to have an almost human understanding of what we say to them. These dogs tend to have a history as working dogs because farmers, hunters, and guards needed dogs that listened to them and took orders without fail.

At home, intelligent dogs require stimulation, so if you do choose one of the 15 breeds in this list, ensure that you have the time and the capability to train and exercise them regularly.