10 Snakes Found in Wisconsin (With Pictures) 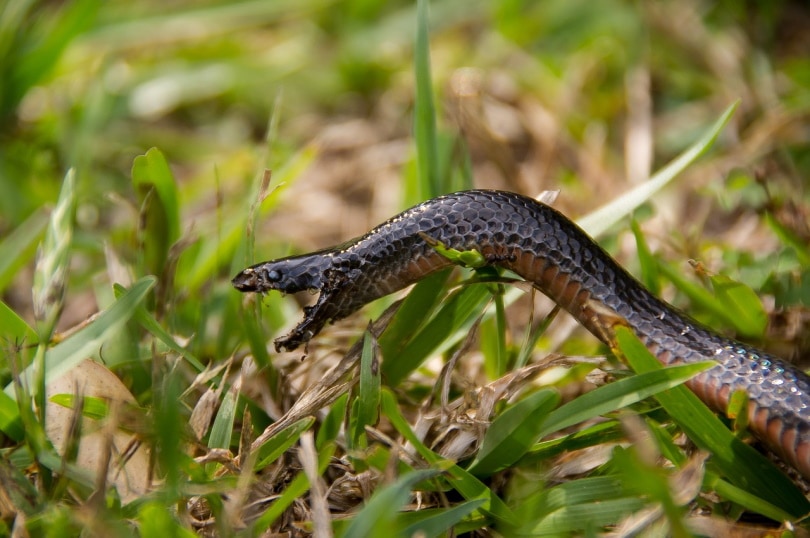 Wisconsin has extensive parks and trails. There are secluded wooded areas and plenty of great places to hike, camp, and fish. With all this wilderness, nature lovers might expect to see penalty of snakes and they’d be right. Wisconsin is home to many species of snakes.

Butler’s garter snake is one of the smallest garter snakes found in Wisconsin. They live mostly in the southeastern part of the state. You’ll usually find them in marshlands, prairies, old fields, and open meadows. They have black, brown, or olive green bodies with three stripes in yellow or orange. Interestingly, these snakes usually only eat earthworms, eschewing the more opportunistic diet of many other garter snakes.

The common watersnake is found throughout the state of Wisconsin. Although they can be found near any body of water, they tend to prefer rivers with clean water. They have tan, brown, or grey bodies with brown, black, or reddish blotches. They are often mistaken for cottonmouths, although cottonmouths do not live in Wisconsin. These snakes eat amphibians, crayfish, and slow-moving fish.

The Eastern Massasauga rattlesnake is one of only two species of venomous snakes found in Wisconsin. They are considered endangered in the state and threatened throughout the country. They typically live in meadows, prairies, and fields near wetlands and rivers.

The venom of these snakes is a cytotoxic venom that disrupts blood flow and prevents clotting. Their venom causes their prey to die of internal bleeding. They are shy and typically try to stay far away from people. If they do bite a human, there is treatment available.

The Eastern ribbon snake is a semi-aquatic species. They are found in several isolated spots throughout the state of Wisconsin, although their numbers have been in decline. They are food for many other animals near the lakes and rivers that they live along, including herons, hawks, raccoons, and minks. They have black or brown bodies, with three white, green, or yellow stripes running the full length.

The gray rat snake is found in the southwestern part of Wisconsin. This arboreal snake spends most of their time in trees. They eat rodents and nesting birds. They hunt by both constricting their prey or by swallowing smaller animals whole.

They blend in well in their habitat with a light gray body with darker gray blotches. Despite their large size, they are rather shy and won’t attack unless provoked.

The Plains garter snake is found mostly in the southern part of Wisconsin, with limited numbers in a small central pocket. They prefer to live in areas with low canopies, such as open fields, prairies, and other grasslands.

Their dark brown scales with yellow or orange stripes help them camouflage in the tall grasses. Many other animals will eat these snakes, including hawks, foxes, coyotes, cats, and skunks. They aren’t venomous but will emit a bad smell when they feel threatened.

The queensnake is a semi-aquatic species found in the southeastern part of Wisconsin. They usually prefer to live near fast-moving rivers and streams, where they can bask on the shore, although they can also inhabit lakes and other bodies of water. They primarily eat small crayfish and even hibernate in abandoned crayfish burrows in the winter. They look similar to many species of garter snakes with their dark bodies and three lighter-colored stripes.

The red-bellied snake is one of the smallest snakes found in Wisconsin. They live throughout the state in woodlands near bodies of water. They favor damp, cool environments because they primarily feast on gastropods found in similar conditions. They are brown or gray with a bright-red belly. They are more tolerant of the cold than some of Wisconsin’s other snakes and can be found even in the northern part of the state. Since they are small, they are a food source for many other creatures, including raccoons, crows, hawks, and cats.

The timber rattlesnake is one of only two venomous snakes found in Wisconsin. They are found along the southwestern edge of the state. They hate the cold and can hibernate for up to 7 months of the year if the weather remains cool. When active, they prefer woodlands and areas near agricultural sites.

They can vary in appearance, being black and grey, brown and yellow, or yellow and tan. While these snakes are venomous and can be dangerous, they generally only bite when provoked. They don’t usually strike without plenty of rattling and warning. That said, their venom is a neurotoxin and can be deadly if not properly treated right away.

This is another semi-aquatic species of snake. The western ribbon snake is primarily found near bodies of water in the southern part of Wisconsin. They look similar to the eastern ribbon snake, with darker bodies and light-colored stripes running from head to tail. The biggest difference between the two is the longer tail of a western ribbon snake. They hunt for prey by moving their head in rapid succession, as though they are about to strike. This scares their prey out of hiding, where the snake can then chase and capture it.

There are many snakes in Wisconsin’s woodlands, fields, and bodies of water. Of these species, only two are venomous. Both venomous species prefer to be left alone and won’t generally strike humans unless they are provoked.

The next time that you’re hiking the trails or fishing on the waters of Wisconsin, keep an eye out, and you may get the opportunity to snap a photo of one of the interesting snakes living there.