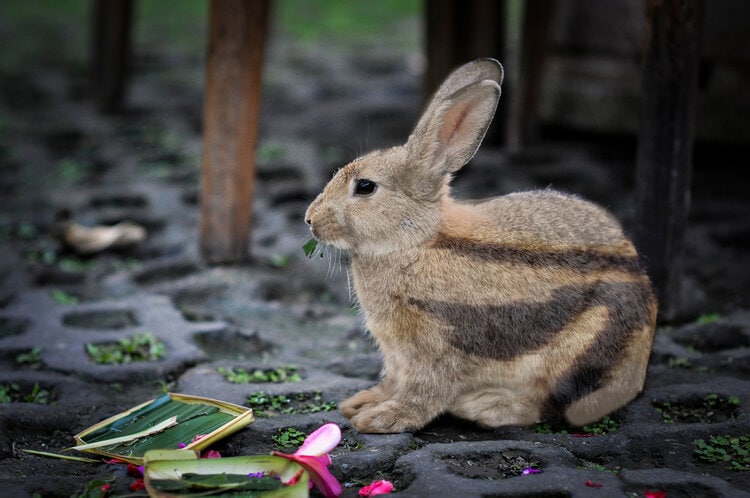 Most often, when you hear about an endangered Sumatran species, you’re going to hear something about a rhinoceros, elephant, orangutan, or a tiger. All of these Sumatran species are endangered, and they’re highly popular and politicized. But there’s a lesser-known Sumatran species that you likely haven’t heard about, though it’s considered the rarest of its kind in the world: the Sumatran Striped Rabbit.

Rabbits are rather elusive creatures, but none is harder to spot than the Sumatran Striped Rabbit. This species is the rarest rabbit in the world, and it’s one of only two living members of the Nesolagus genus, separating it from most of the rabbits that you know.

The Annamite Striped Rabbit is the other Nesolagus rabbit, which is similar in appearance to the Sumatran Striped Rabbit, though genetic studies seem to imply that these two species diverged from each other around eight million years in the past.

Little is known about the Sumatran Striped Rabbit because they’ve hardly ever been seen. Until 1998, the last recorded sighting of this rare species was in 1972. Before that, none had been seen since 1916. The species was long believed extinct until raw luck proved otherwise when a camera trap captured a photo of one on accident.

Between the 1927 and 1998 sightings, three surveys were carried out searching for evidence of this rare creature, though nothing was found. Though there were sightings in 2007 and 2011, they were once again captured by camera traps. It wasn’t until 2008 that one was seen in person, when scientists in Bukit Barisan Seletan National Park happened upon one and were able to photograph it.

How Much Do Sumatran Striped Rabbits Cost?

Rabbits make excellent pets that are rather easy to care for. However, Sumatran Striped Rabbits are too rare to even consider domestication. Even if you could purchase one, because of their incredible rarity, the cost would be astronomical. As a critically endangered animal, it’s completely illegal to one a Sumatran Striped Rabbit.

Because these rabbits have rarely ever been seen, very little is known about their typical behavior. While it can be assumed that they’re similar to other rabbit species in many key ways, this isn’t known for certain.

Throwing an additional curveball into the mix is the fact that this species is one of only two in the world that belongs to the Nesolagus genus, which means there aren’t even any family members to compare.

What we do know is that Nesolagus rabbits are nocturnal. They sleep during the day, generally buried in burrows that were dug by other animals.

Though there have only been a few select sightings of the Sumatran Striped Rabbit over the last hundred years, they have been captured in photographs, allowing us to get a good idea of its appearance. These rabbits are about the same size as a standard European Cottontail. Their coats are quite different though, featuring distinct brown stripes that run down the body and face. These stripes act as a sort of camouflage, allowing the rabbit to blend into its rainforest surroundings.

Of course, there have only been a handful of sightings since we’ve determined that the Sumatran Striped Rabbit is not extinct. While there may be variations in appearance that we don’t know about, for now, all we really know is their approximate size and their striped appearance.

Where Have Sumatran Striped Rabbits Been Spotted?

As the name implies, the Sumatran Striped Rabbit is located in Sumatra, which is one of the Indonesian islands in the Indian Ocean, south of Thailand. Even in its homeland, the species is incredibly rare, with only a few sightings recorded in the last century.

So far, the Sumatran Striped Rabbit has been spotted in just two national parks in Sumatra, both of which are located in the Sundaland Biodiversity Hotspot.

In 2007 and 2008, scientists captured photos of the elusive species in the Bukit Barisan Seletan National Park. In 2012, researchers from the University of Delaware accidentally captured photographs of a Sumatran Striped Rabbit on their camera traps in the same national park while attempting to locate a rare Sumatran leopard.

The largest national park in Sumatra is Kerinci Seblat. Though no photographs of the Sumatran Striped Rabbit have been captured here, scientists from the national park have spotted the rabbits on several occasions. Currently, studies are underway in the area to learn more about this rare and, hopefully, recovering species.

How Rare is the Sumatran Striped Rabbit?

It’s difficult to determine just how many of these rare rabbits remain on Earth. The species was long considered to be extinct. Once spotted, they received the critically endangered conservation status.

Between 1880 and 1916, about a dozen museum specimens of the species were collected. After the last was found in 1916, it would be 56 years before another was spotted in 1972. It would be another 26 years between that sighting and the next, during which time the rabbit was labeled as extinct.

While we now know that there are several surviving members of the species, we have no idea how many there are. Efforts are ongoing to learn more about the species, but for now, we can only guess about how many individuals still exist of the rarest rabbit on earth.

What do Sumatran Striped Rabbits Eat?

Members of this genus feed on the leaves of understory plants. They also eat succulent stalks and other foliage on ground level. It’s believed that they eat other fruits and vegetables as well, similar to what captive Newolagus rabbits have eaten in the past.

In Sumatra and much of Indonesia, the forests are dwindling. Because of this, many species are becoming endangered and face the risk of extinction. For the most part, it’s the large and well-known animals that accrue all the attention. This includes rhinos, elephants, leopards, tigers, and more. But the little Sumatran Striped Rabbit hasn’t received much attention, if any at all.

This rabbit species is facing the same problems as the other endangered species in the same area. They’re losing habitat quickly to deforestation, leaving them nowhere to turn, forcing too many animals into an area that’s too small for them all.

Luckily for the Sumatran Striped Rabbit, the endangerment of other species means an opportunity for this rabbit species to once again grow and multiply. With fewer predators, these rabbits have a better chance of surviving, which is likely why we’ve spotted more of them in recent years.

Summary of the Sumatran Striped Rabbit

When you think of animals that are endangered and facing extinction, few people give thought to the smallest of animals, such as the Sumatran Striped Rabbit. But ecosystems and food chains rely on every creature, from the smallest to the largest. Even little critters like rabbits play an important role, and if they disappear, other species are soon to follow.

The Sumatran Striped Rabbit is the rarest rabbit in the world, and one of only two surviving members of the Nesolagus genus. They were thought to be extinct for many years until camera traps caught pictures of them by chance. Today, their numbers are still low, but we’re spotting them more often. Hopefully, one day, this species will once again flourish.

Looking for other rabbit breeds? Try: