Syrian Hamster vs. Dwarf Hamster: What Is the Difference? (With Pictures) 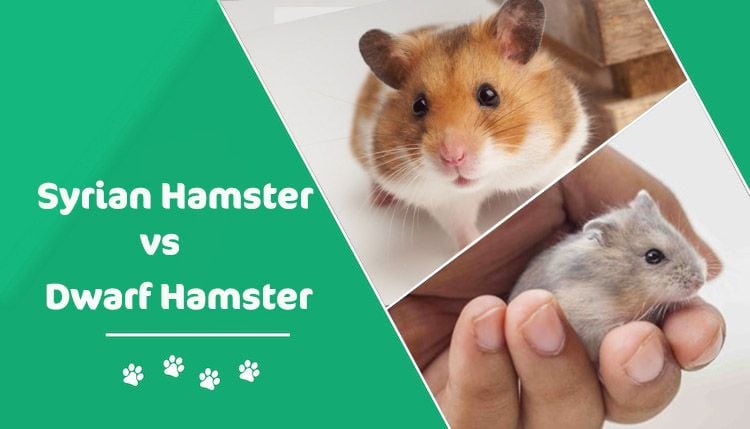 A hamster is a hamster, right? Not so fast! There are actually a couple of different types of hamsters found both in nature and in captivity. There is the Syrian hamster, which hails from Syria, as the name suggests. The other is the Dwarf hamster, which originates from places like China, Mongolia, and Siberia, where weather extremes are typical.

While there is just one type of Syrian hamster, there are four different types of Dwarf hamsters that are suitable as pets. These include the Campbell, the Roborovski, the Winter White, and the Chinese. There are notable differences between the Syrian hamster and the Dwarf hamster that should be considered by anyone thinking about getting a hamster as a pet.

A few of the major differences have to do with size, temperament, and even eating habits. Also, habitat differences and exercise needs tend to be different. We have laid everything out for you in digestible segments below. Check it out!

Syrian hamsters can grow to be up to 8 inches in length when fully grown, whereas Dwarf hamsters can be anywhere from 2 to 4 inches, so the difference in size between the two breeds is significant. They have similar looks, but the Syrian hamster tends to have larger, rounder eyes. Both types of hamsters can have short or long coats, and both produce multiple coat colors depending on their lineage and breeding history.

They spend most of their awake time exploring, so they should have access to plenty of toys and hiding spots within their habitat. Syrian hamsters who get attached to their human family members will gladly hang out on a lap during movie time. These animals are naturally nocturnal, but they can adapt to the human clock and adjust their sleeping habits accordingly.

These little animals are highly active and curious, so they need plenty of exercise throughout the day. Syrian hamsters will roam around almost constantly while awake, and their interactive personality makes them fun for kids and adults to spend time with. The Syrian hamster does not necessarily need time outside of their habitat, but they would surely appreciate it. They should have access to balls and other interactive toys to help keep them in shape.

There are a few basic things that you can train a hamster to do, but for the most part, they will do what they want to do. The Syrian hamster can learn how to come when called and may interact in specific ways when collaborating with their human family members. However, they require patience, a kind and loving hand, and treats for optimal training results. Expect these animals to spend months learning and perfecting tricks.

Syrian guinea pigs are generally healthy and do not display any health problems during the few years of life that they enjoy, but they should be checked out by a veterinarian once a year just like any other pet, to make sure that they stay healthy and to catch any issues, like digestive problems, before they become serious.

They should be kept in a cage or aquarium that gives them at least 2 square feet of space to explore daily. They should not be housed with other animals of any sort, even other hamsters, as they will fight to the death to secure command of the habitat. Toys and interactive landscapes should be included in their habitat to promote movement and overall physical health.

These animals are suitable for any family, with or without kids, that has time to interact with a small animal daily. They are low-maintenance pets, making them the perfect option for first-time pet owners of any age and any background. They are also fairly independent, which makes them great pets for singles who are not home much.

Dwarf hamsters are tiny, fast, and independent. Unlike Syrian hamsters, they will run and hide when humans try to handle them. Handling from a young age can help tame them, but these tiny animals will do whatever they can to avoid capture by hand. These tiny pets will squirm and wiggle whenever they are picked up, making them a more enjoyable pet to watch rather than interact with.

They prefer to spend their time alone or with other Dwarf hamsters, except for the Chinese Dwarf. These little hamsters demand to live alone, like the Syrian hamsters do. The other three breeds of Dwarf hamsters are happy to live together in groups, though they do not take well to other animals easily.

Dwarf hamsters need less exercise than their Syrian hamster counterparts, but they are far from lazy animals. These pets should have plenty of room to climb the walls, explore faux caves, and burrow into bedding during their waking hours. They love running on wheels and will run until they are ready for a long nap or a good night’s sleep.

Dwarf hamsters do not like being handled much, so they do not take to training as well as Syrian hamsters tend to. These animals are more for watching than interacting with. They are small and will run away anytime someone tries to pick them up. Patience and a loving, caring hand can help make them tame.

Like the Syrian hamster, the Dwarf hamster generally spends their life in good health. They should be seen by a veterinarian regularly, but otherwise, there are no specific health precautions that should be taken. A proper diet of hay pellets, fruits, and vegetables is a necessity, along with fresh, clean water.

The Dwarf hamster is a suitable pet for families that do not have much hands-on time to offer a pet. They are fun to watch, but they do not want hands-on interaction, which is great for people without kids or with younger kids, but they could be disappointing for households with older kids.

Which Breed Is Right for You?

Is the Syrian or Dwarf hamster breed right for you? It all depends on the amount of interaction and the extent of engagement that you want to commit to. Owning a Syrian hamster is more time-intensive than owning a Dwarf hamster. However, the love and bonding that takes place with an interactive Syrian hamster can be just as rewarding as the bond that is created with a cat or dog — or even another person!

Only you can decide which breed of hamster is right for you. Which hamster do you think is the best option for you and your family? We want to know what you are thinking! Leave us a quick message in our comments section.

Some of these may not be applicable to all types of pets. Please replace these with suitable categories related to the pet, e.g. if you’re writing about fish, use aquatic categories.