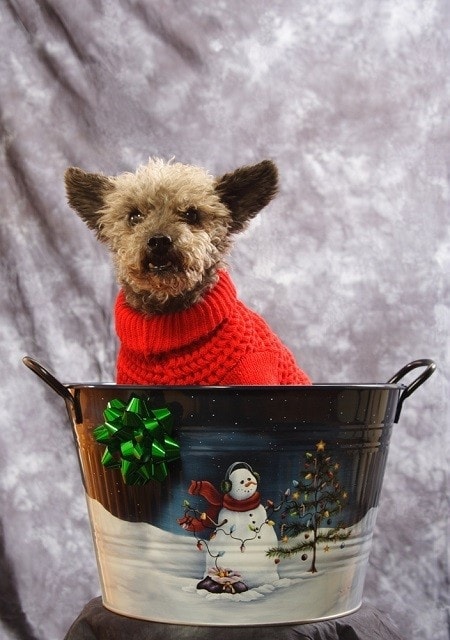 The Terri-Poo is a mix of the Australian Terrier and a Poodle, either Toy or Miniature size. Also called Terripoo, Terrypoo or Terridoodle she is a small cross with a life span of 10 to 15 years. She is an active dog with quite the entertaining mischievous side.

Where does the Terri-Poo come from?

The Terri-Poo is an intentionally bred mixed dog and as with most of these so called designer dogs it has two purebred parents and a name that blends the parent names. Designer dogs have increased dramatically in popularity over the last 20 years or so and some have become especially favored. This has drawn in some types of breeders you need to avoid such as puppy mills and so on who do not look after their animals, have no real plans in terms of breeding and can charge excessive prices. The Terri-Poo uses one popular purebreed in Designer dogs, the Poodle but despite that has not taken off as much as some other Poodle mixes. As with a lot of designer dogs there is little to no information on its beginnings so we can look at the parents to get a feel for her.

Another very old breed is the Poodle. You can find pictures of Poodle like dogs on old Roman and Egyptian artifacts and in tombs from as far back as the 1st century. Despite most regular people thinking the Poodle is a French dog, in fact he comes from Germany and was used for hunting ducks and other waterfowl. But he became a more distinct breed when he made it to France. There have been three sizes of Poodles for centuries, the Standard, the Miniature and the Toy. French aristocracy adopted the toy Poodles as companions to carry around with them. When the Poodle was adopted into traveling circuses to perform they clipped them into interesting shapes and the aristocracy copied. He was registered in the Kennel Club in England in 1874, and the American Kennel Club in 1886.

Today he is known for being super intelligent, eager to please and easy to train. He is very devoted and loving and while energetic, can be calmed with training, socialization and enough exercise. He may seem to be aloof but in fact when you talk to Poodle owners you discover he has a great sense of humor and loves to clown around and play.

The belief is the Australian Terrier comes from the Rough Coated Terrier which in turn is a dog related to the Scotch dog from Great Britain. It has a mix of several terriers that were brought to Australia with the early European settlers such as the Black and Tan, the Dandie Dinmont, the Yorkshire and the Skye. The settlers needed a tough dog that could handle the tough conditions there. The Australian Terrier, also called the Aussie was bred for several roles, a ratter and snake hunter on the waterfront, in mines and at sheep stations. Also as a shepherd dog, watchdog and a companion too. He came to England with the aristocracy and the foreign service and was recognized by the English Kennel Club in 1933.

Today he is fun loving, energetic and a great companion for individuals or families. He is very loyal and forms close bonds with his human owners. He likes to be at the center of things and is a smart dog. It is important to keep him stimulated as when he gets bored he really acts out.

The Terri-Poo is an intelligent and loyal dog who can form strong bonds with one owner in particular. She is very loyal and sensitive too, good at sensing what mood her owner is in and adapting. She has quite a mischievous side and loves to play and have fun. She is friendly and affectionate, active and alert. She likes to be around people and is eager to please but she does not like being left alone for long periods of time.

This is a small dog weighing 8 to 14 pounds and standing 9 to 15 inches tall. She has a well proportioned body covered in a short to medium or even long coat that can be fluffy or harsh, dense and straight,shaggy or even curly. Common colors are black, sable, tan or white. She has oval dark eyes and medium sized ears that fold over.

How active does the Terri-Poo need to be?

The Terri-Poo is a fairly active dog who is at a size that makes a great apartment dog as long as she still gets daily walks outside. She would appreciate access to a yard to play in but it is not a requirement. Take her for a chance at off leash running and playing to somewhere like a dog park. This is also an opportunity for her to socialize. This is not a dog that is happy when she is bored so make sure as well as getting her enough physical exercise she should have toys to rotate through as well as opportunity for mental stimulation.

When training any dog it is important to be firm and establish yourself as the the dominant pack leader. Then you can employ positive training methods using praise, treats, encouragement and rewards. Scolding, punishing and other negative techniques are not going to get you the results you want. Early socialization and training are key to a well rounded trustworthy dog. She will be a happier dog and you will be a happier dog owner as a result. She is smart and eager to please so training should be at least moderately easy.

Terri-poos tend to be clean dogs so while some brushing is needed to remove tangles, debris and keep it healthy, a couple of times a week should be enough. A coat more like a Poodle’s may need more brushing and it also is likely to need professional grooming on a more regular basis. Only give her a bath when she needs it. It will damage the natural oils in her skin and make her itchy is you bathe too often or if you use something other than a dog shampoo. Hair around the ears, eyes and paws will also need regular trimming. She sheds a minimal amount so may be good for people with allergies though that should be checked first. Wipe her ears once a week and check for infection. Brush her teeth two to three times a week and have her nails clipped when they get too long.

With early socialization she is a great playmate for children. She is playful, energetic and affectionate but with young children she should be supervised as they can sometimes not be as careful as they should be when touching and playing with dogs. With other dogs she continues to be very good but with other pets that socialization is even more important.

The Terri-Poo is a good watchdog, she has a history of it and will bark to alert you if there is something to be aware of like an intruder. She will need to be fed ½ to 1 cup of a good quality dry dog food each day, split into two meals.

There are health issues she can be more prone to and there are also health problems that could be passed on from parents who have not passed health clearances such as Addison’s, Bloat, Cushings, Epilepsy, Hypothyroidism, Legg-Perthes, Patellar Luxation, Eye problems, Von Willebrand’s, Diabetes, Hip Dysplasia, Skin Problems and Allergies.

Costs involved in owning a Terri-Poo

The Terri-poo puppy will cost between $250 to $750 depending on who and where you are buying from. You will also need some things like a crate, collar, leash and carrier for about $100. Medical procedures will have to be done too like an exam by a vet, blood tests, deworming, shots, spaying and micro chipping for $260 to $300. Annual medical costs like further shots, flea and tick prevention, pet insurance and check ups come to between $435 to $535. Annual non-medical costs for things like licensing, grooming, toys, food, treats and training come to between $540 to $640.

Looking for a Terri-poo Puppy Name? Let select one from our list!

The Terri-poo is a great lap dog but also has a lot of energy and needs a lot physical and mental stimulation to keep her happy. She is very devoted and loyal with a great attitude and will fit in to most homes quite easily. She will need a certain amount of attention though, she does not like to be ignored!