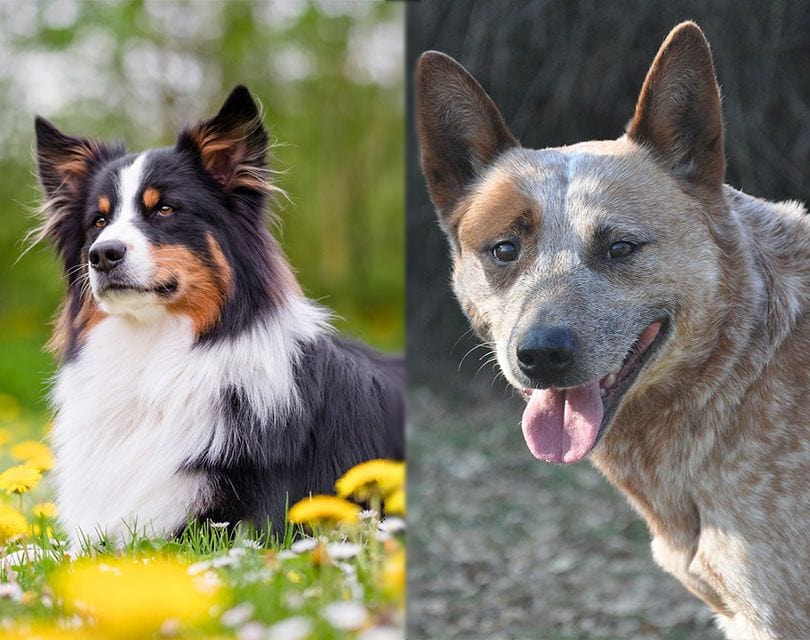 The Texas Heeler is a mixed dog the result of breeding an Australian Shepherd Dog with an Australian Cattle Dog. She is a medium cross breed with a life span of 12 to 15 years who enjoys taking part in dog sports like Agility, Frisbee, Rally and Obedience. She is a natural at herding (heeling) and is both a working dog and a family dog. She can be very hard working but is also willful and hard headed at times! She is also sometimes called an Aussie Shepherd Heeler, the Blue Heeler or Queensland Heeler.

Where does the Texas Heeler come from?

The Texas Heeler is technically a designer dog, these are dogs created by breeding usually two purebreds together. However this dog is a little different to other designer dogs, we know a little about who fist registered her with the Animal Research Foundation and why she was bred. In May 1970 Lucy Guynes was the one to register her though in all probability the mix was around for a while before that. After this the popularity of this dog increased especially as a working dog for ranches and farms in Texas. She was bred to create another hard working dog who excelled at herding. While she is now often taken as a family dog in homes rather than just as a working dog she still is more popular in her home state. To get a feel for what is going into her, here is a look at her parents.

In the 1800s Australian settlers working on large ranches bred the Australian Cattle Dog as they needed a working dog to help herd cattle. They wanted a dog who was hardy and could handle the difficult climate in Australia as those brought from England were not up to it. A lot of different breedings with different local dogs eventually led to the ancestor of what we see today. Since the blue color was the most popular they were also called Blue Heelers. He was finally accepted by the American Kennel Club in 1980.

Today this is still a dog who needs a lot of physical and mental activity. Otherwise he becomes bored and destructive. He is still used as a working dog but some are also kept as family dogs and if the latter is the case he will need to be kept busy. He is territorial and protective of what he sees as his and he will act to defend it. He is standoffish with strangers but he is very loyal to his owner and family and can bond very closely. As a result he does not like to be away from you at all. While he is clever he is independent and can be stubborn.

You might understandably think this is a dog from Australia, but in fact it is an American born purebred, first developed as a farm and ranch dog to herd livestock. The Australian part comes from the fact the many Aussies worked on those those ranches and likely used Australian dogs in the breeding like collies and shepherd like dogs. In the 19th century breeders wanted to create an intelligent, hard working and adaptable dog with excellent herding abilities. With the increased interest in Westerns and cowboys shows and rodeos the breed also became more popular but was not recognized by the AKC until 1993.

Today the Australian Shepherd is still intelligent, energetic, protective and dominant if you let him be. He therefore needs early socialization and training with a firm but fair handling. He is loyal but wary of strangers. He makes a great working dog still but is also a good family dog.

The Texas Heeler is intelligent and can actually learn the meaning of over 200 words. She is hard working and makes a great working farm dog but with socialization and training can also be a good family dog. She has a lot of energy and is very driven but also very hard headed sometimes. She loves to have some rough play, and has very strong herding instincts. She is affectionate to her owner but aloof with strangers.

She is a medium sized dog weighing 25 to 50 pounds and standing 17 to 22 inches tall. Her coat can vary depending on which dog she takes more after, it can be short, smooth or medium and water-repellent and colors include blue, tan, merle, black and white. Her ears can be pricked or folded and she can have a long tail or a bobtail. Her head is round and she often has white markings on it.

How active does the Texas Heeler need to be?

She is a very active dog. If used as a working dog she will get all the physical and mental activity she needs but as a family dog she will need to be given lots of opportunity to work off her energy. Some owners even say even as active as they are it can be hard to give her as much as she needs. Long vigorous walks at least twice a day, hiking, running or jogging with you, dog park trips are all something she will love. She also should have access to some land or a large yard to play in. She loves to be outside and she is definitely not best suited to apartment living. Play Frisbee with her, tug of war, fetch and let her have some off leash running time.

The Texas Heeler needs an owner who can be dominant and the pack leader. She will test that dominance probably every day so be prepared to be very firm, fair and consistent. If you maintain dominance she will train moderately easy. Early socialization and training are very important in helping her behavior and how she interacts with others and deals with different situations. Keeping the training interesting and sometimes challenging will help keep her mind active and prevent boredom too. While she has strong herding instincts she also trains well in dog sports and other events should you want to show her.

Living with a Texas Heeler

Her coat is easy to groom and will need brushing every other day. She will shed a moderate amount so there will be hair to clean up and vacuum. Over bathing will affect his natural skin oils but you can dry shampoo now and then too. Check her ears and wipe them clean once a week and brush her teeth at least three times a week. When it comes to her nails they will need clipping when they get too long but that is something you may want to leave to a groomer or vet. Dog nails have nerves and blood vessels at the lower part of them so bleeding and pain can happen if you cut too low.

The Texas Heeler can get along well with children, other animals and dogs with early socialization and training. She is certainly not a natural with them so will need help, being raised with them is another way to improve the interactions. She may have a habit of trying to herd them too!

She is a good watchdog and will bark if an intruder is entering the property. She otherwise does not bark often. She does well in most climates and should be fed 1 1/2 to 2 1/2 cups of high quality dry dog food a day, split into at least two meals.

Her parents are more prone to certain health issues and they can be passed to her. They include Epilepsy, deafness, OCD, eye problems, hypothyroidism, drug sensitivity, cancer, Joint dysplasia, allergies and collie nose. By only buying from breeders who will allow you to visit the puppy and see the conditions and will show you health clearances for the parents you can improve your odds on a healthy dog.

A Texas Heeler puppy will cost between $150 to $850. Other costs include a crate, carrier, collar, leash, spaying, micro chipping, blood tests, deworming and vaccinations which come to between $455 to $500. Medical costs each year for just the basics are $460 to $580 for check ups, shots, pet insurance and flea prevention for example. Non-medical costs each year are between $400 to $500 for things like food, treats, toys, license and training.

Looking for a Texas Heeler Puppy Name? Let select one from our list!

The Texas Heeler is not an easy dog to take in as a family companion. She will need early socialization and training and she will need a lot pf physical and mental activity. She also needs owners who can be dominant and deal with her challenges. But she is extremely loyal, bonds very closely and could be something special with the right owner. As a working dog while she may be hard headed no dog beats her for her work ethic, her intelligence and her stamina and skill.