Top 14 Amazon Parrots to Keep as Pets (With Pictures) 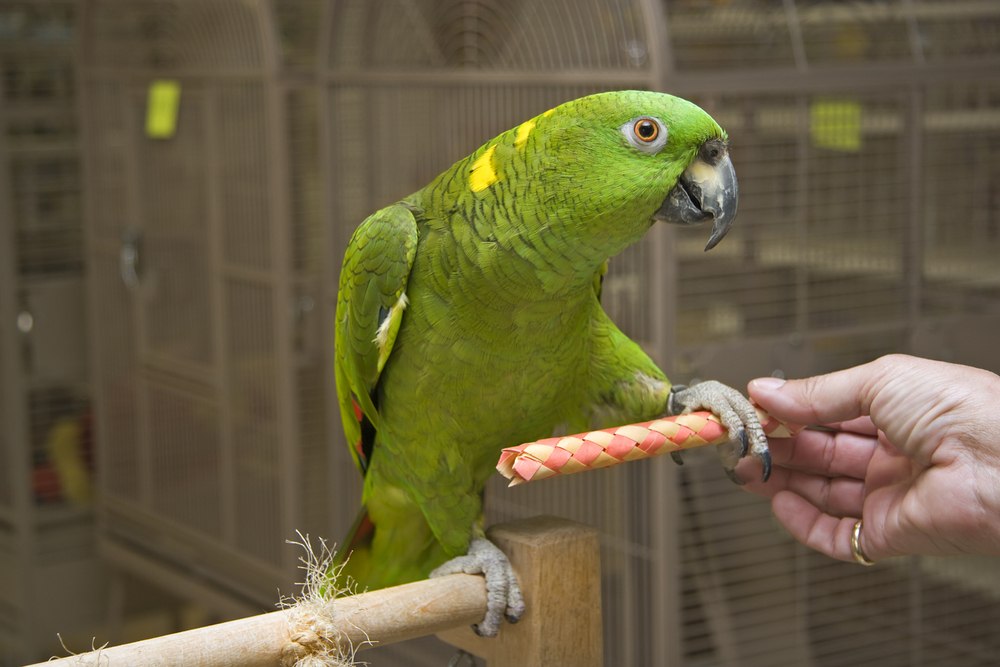 Amazon parrots are known for being some of the most intelligent birds on the planet. In fact, all of them have the natural ability to talk, mimicking the words of human languages, which makes them wildly popular as pets. Plus, they have affectionate, goofy personalities that make them very entertaining.

Unfortunately, not all of the Amazon parrots can be kept as pets. Many of them are threatened or endangered because of deforestation and poaching. So, which Amazon parrots are the best to keep as pets?

Out of 30 species of Amazon parrot, the following 14 are the best ones to own. We will briefly describe each species to help you get a feel for which one you might want to look further into.

The Top 14 Amazon Parrots To Keep As Pets

Because of how smart they are, Yellow-Crowned Amazons learn speech very quickly and can remember a large number of words. Once trained, they can even clearly and concisely repeat complex sentences. But they are very vocal if they feel bored or neglected, and they can be extremely loud about their displeasure!

Another Amazon parrot named after their defining physical characteristic, the Yellow-Naped Amazon parrot has a bright yellow patch on its nape (the back of its neck). Other than the yellow patch, this bird is almost entirely bright green.

What makes this species popular as pets is their outgoing nature. They’re very talkative and social, enjoying regular interaction with their humans. Yellow-Naped Amazon parrots love challenges. They need a lot of mental and physical stimulation, and they’ll seek it out through different toys. But they tend to get fat and lazy in captivity, so you’ll need to ensure you’re providing constant access to exercise and avoid overfeeding.

At just 11 inches long, the Yellow-Billed Amazon parrot is one of the smaller Amazon species, though they’re a bit thicker than other parrots. They have a bright yellow beak, as their name implies, with white foreheads and blue accents on their faces. Males and females display no visual differences.

This species can live for up to 50 years. They are very active and are known for making long-distance flights to feeding areas. As such, your Yellow-Billed Amazon will need lots of flying time or it will likely become obese in captivity.

The Double Yellow-Headed Amazon parrot may be a medium-sized bird, but it’s got a larger-than-life personality! They’re very vocal, talking all the time and even bursting into song at random. They’re big hams, goofy and hilarious. You can often see them screaming their heads off while sliding across the floor.

As the name suggests, this parrot has a mostly yellow face and head. They love to sing and can even learn opera! If you’re looking for an Amazon parrot that can learn a lot of words, then the Double Yellow-Headed Amazon is one of your best choices. They’ve also been kept as pets since the 1500s by everyone from royalty to pirates.

Affectionate companions that bond closely with their owners, Orange-Winged Amazon parrots make excellent pets. They tend to be calmer and gentler than other species of parrots. However, they go through a hormonal bluffing stage when males might start to exhibit aggressive behaviors, even going as far as biting.

Your Orange-Winged Amazon parrot will likely get along with everyone in the family, though they’ll bond closest with a single person. These are very social birds, so expect a lot of interaction. They’re also very fast learners thanks to their high intelligence, a trait that endears many to this smart species.

This is one of the rarer species of Amazon parrot, though you can still find them available as pets. They’re friendly birds in general, and they love human attention. If you speak to your Panama Amazon parrot enough, they’ll pick up your words, becoming quite the talkers with a bit of training.

Though they’re a similar green color to many of the other Amazon parrot species, the Red-Lored Amazon parrot is recognizable by the bright red patch on its nose, directly above the beak. They’re also some of the most popular Amazon parrots to keep as pets.

This species needs a firm hand with training. They tend to act out if not trained properly, so don’t skip out on this part! But they’re good-natured and do get along well with all members of the family, though they’ll often bond closest with just one. Keep in mind, this parrot can scream and will likely be your alarm clock at sunrise every day.

Also known as the White-Fronted Amazon, this species has a bright white patch on the front of its forehead. Males will have bright red shoulder feathers, making them easy to tell apart from the females who have green shoulders like the rest of their body. They’re pretty small for Amazon parrots, only 9-10 inches long. But they’re big call to fame is that they’re the most abundant species of all the Amazon parrots.

Like all Amazon parrots, they can be pretty noisy, releasing shrill screeches that could wake the whole house. They are known to imitate up to 40 different sounds.

This species is also called the Mexican Red-Headed parrot and they’re known for being flock-oriented birds. Whether the flock is other birds or their humans, they want to be with their flock all the time.

If you’re looking for a talking parrot, the Green-Cheeked Amazon is one of the better speakers of the bird world. They can live up to 70 years with proper care, so getting one is a lifetime investment. They’re one of the few parrots that have flocks in the United States, though their numbers in the wild are dwindling.

For Amazon parrots, the Mealy is pretty large. They’re about 16 inches long and can weigh over two pounds! For this reason, they’re known as the gentle giants of Amazon parrots. They’re easy to train and much calmer than other species, which is why they make such great pets.

If you prefer a more laid-back parrot, then the Mealy is a good option to consider. They’re very gentle and affectionate, forming close bonds with their person. In the wild they’re monogamous creatures, though in captivity they’ll often seek out any family member who can provide some attention.

With a unique purple plume that covers their forehead and crown, the Lilac-Crowned Amazon parrot is easily distinguishable from other Amazon parrots. They’re one of the smaller Amazon parrots, and considerably quieter than some of their larger cousins. They don’t have the same big voice that carries, so they’re a good choice for people who don’t want to disturb the whole neighborhood!

Known for being excellent talkers, the Blue-Fronted Amazon parrot is one of the more entertaining birds you can keep as a pet. They love humans and bond closely, which is one reason they make such great companions. But they need a lot of space and lots of attention, so be sure you can provide everything they need before you get one.

This species loves to be the center of attention. They’ll put on a show and perform for their owners. They become so close with their family that they might even attempt to attack anything they perceive as a threat to their people, dive-bombing to protect their family.

The affectionate, gentle nature of the Lilacine Amazon parrot makes them popular as pets. But like other Amazons, they have a tendency to be very noisy with shrill shrieks and calls. Until recently, the were considered part of the Red-Lored Amazon species, but they’re now considered to be their own species of Amazon parrot.

A noisy parrot, the Black-Billed Amazon is best suited for people who don’t mind screeching sounds and who don’t have neighbors too close by! They’re not very hardy birds, and great care must be taken to properly acclimatize them. Worse, they’re susceptible to disease.

This is the smallest breed of Amazon parrot, reaching just 10 inches in length. They are so-called for their black beak, which makes them easy to differentiate from other Amazon parrots.

Amazon parrots can make incredible pets. They form close bonds with their people, showing their affection openly. They’re also very vocal and can build up quite a vocabulary, a trait unique to just a few birds.

Remember, Amazon parrots can be very noisy. Adding one to the family is akin to adding an extremely loud alarm clock that will go off every morning and evening for the next 30-80 years! Plus, you’ll need plenty of space for your parrot since they need to fly or they’ll gain weight.