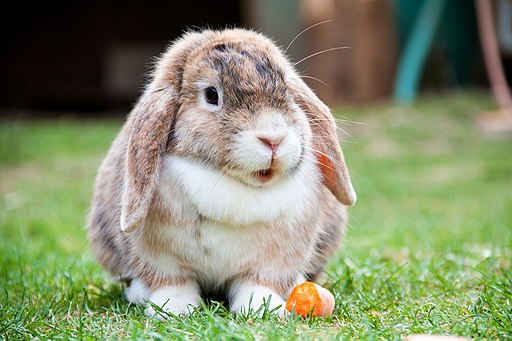 Rabbits, in general, are adorable. Their little feet and floppy ears are just what the doctor ordered when you are in the mood for something cute. These fluffy little bunnies come in all shapes and sizes, as well. You can find long furred rabbits, black colored fur, spotted, floppy ears or perked. Whatever your taste, there is a bunny for you that will melt your heart.

With all that being said, there are some little pink noses that take the cake…and we have found them! Below, we have found the 15 cutest, most adorable, most heartwarming rabbits in existence. Not only will we provide pictures, but we will also give you a little info about each one to go along with it!

Before we get into the cute stuff, a few things you might not know about rabbits. Rabbits are small mammals with cottontails and long ears. There are more than 30 different species of rabbits, and they can be found all over the world. With that being said, they are most prominent in England, Belgium, Holland, France, and the United States, but they still have a strong place hold in other areas.

It is only recently in our history that rabbits have been domesticated as pets. They were mostly used for their meat (perish the thought) and their soft fur which is still used to make sweaters and other items in some parts of the world. Overall, though, they have become an accepted pet with many great qualities.

Now, on to the good stuff…

Our first choice is the Columbia Basin Pygmy. This is not only the smallest rabbit in the world but also the rarest. They nearly became extinct in the 1990s, but have managed to make a comeback. They are tiny, soft, with long ears, and a tiny nose.

This next rabbit is also a small breed with a dense thick fur coat. This breed originated in the United States in the state of New Jersey. They have perked ears, fuzzy faces, and a sweet disposition.

The Lionhead is named for its lion mane hair due. This adorable breed resembles a miniature sized lion complete with golden fur. On the other hand, this type of bunny comes in several different colors, and some adults lose their extra fur when they reach adulthood.

As its name suggests, this bunny is cleverly disguised as a chinchilla. They are so similar, they have been mistaken for each other at times. Regardless of the dress game, this is an adorable and soft rabbit that has an affectionate nature, but they are super-fast.

On the larger size of the rabbit scale, we have the English Angora. This bunny can reach up to 11 pounds when they are fully grown. Their soft and fuzzy coat spreads over their ears, face, and feet, as well as, their body giving them a stuffed animal appearance. They are extra adorable, yet they require a lot of grooming.

This little bundle of fur is probably one you are familiar with as it was the most popular rabbit breed in the world; especially for pets. Although the dwarf rabbit has taken over as the most popular, this color block bunny still has an adorable face and friendly nature.

Speaking of dwarf rabbits, it would not be a “cute list” if we did not mention the dwarf lop. This tiny treasure has soft fur and floppy ears. Their coat comes in many different colors and patterns, plus as mentioned, they are one of the most popular breeds for pets.

While we are on the topic of long ears, we want to mention the French lop. This is a chunky bunny with short fur and long flopped over ears. They are very friendly, calm, but they need a lot of space to hope around.

There is no way you would miss this little cutie if you came across it. The Harlequin has a distinct fur pattern that looks like a bumblebee. Although their markings can differ, they usually will have the color block pattern. They also can have different colors besides the typical gold and brown. They are a medium to large bunny weighing in at 7 pounds.

The Rhinelander is another breed of rabbit with distinct markings. In this case, our furry fellow is known for his spots and long erect ears that have a butterfly appearance. Originating in Germany, this is a high energy bunny with a lot of antics up their sleeve.

The Holland Lop is another long-eared rabbit that has a lot of different fur colors and patterns. This is squat and low to the ground bunny with soft fur and a square head. They also have very soft and long ears that drape their face.

Our next pick is a dwarf bunny that has cuteness in abundance. This little number has soft fur, big head and eyes for their size, and perked ears that lay straight back. They are typically bred to be exhibitionist rabbits or pets, and they have become very popular in that last bunch of years.

The Polish rabbit has a “basic” rabbit appearance. When we say basic, though, we mean adorable and soft. They have large eyes, full cheeks, and short ears. Their shorter fur is soft and shiny, plus they enjoy a nice pat on a comfortable lap.

This next miniature bunny is striking in their contrast between fur and eyes. The Dwarf Hotot has snow-white hair with large black eyes. The difference causes their eyes to stand out even more. This rabbit also features a soft, short coat and small triangle ears that give them an alert appearance.

Last but not least is the checkered giant. This is a unique and adorable rabbit that is known for having either blue of black ears that stick straight up. They also have a blue or black stripe that runs down their back, plus two spots on either side of their body. Weighing more than 11 pounds, they also have the butterfly pattern on their nose.

We hope you have enjoyed this article on the cutest rabbits in the world. Regardless of whether they are small or big, long or short-eared, they are all cute and charming in their way. Depending on your taste, you will be able to find a bunny that melts your heart.