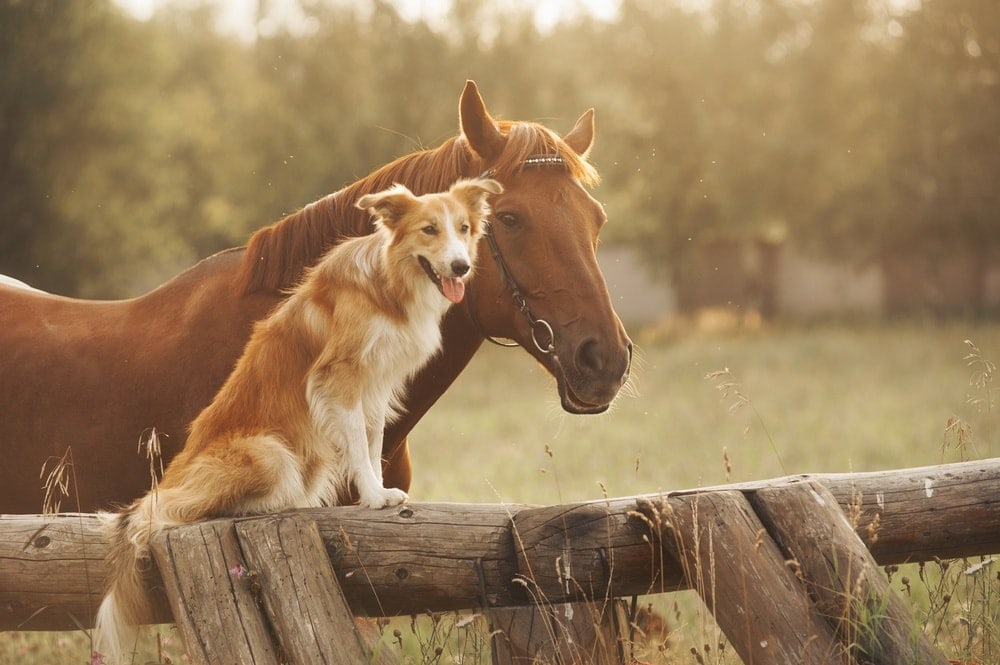 Farm dogs are hardworking, hardy, durable, working animals. Depending on the type of work they are used for, they may need to be highly-protective, entirely independent, or capable of standing up to the largest and toughest of livestock and predators. They will have to put in a lot of arduous work, and while some prefer and even benefit from living outdoors, others prefer to live as part of the family in the evening.

There are different types of ranch dogs, including herding dogs, ratters, and those used for guarding livestock. They each have different skills that pertain to the task they are used for, although some breeds are considered multi-purpose dogs because they possess all the requirements to fit into each of these categories.

Below are the top 15 farm dog breeds that are well-suited for ranch life.

The Border Collie ticks just about every box there is when looking for a herding dog. They are incredibly smart animals, capable of picking up dozens of commands. They can respond to whistles as well as shouts and calls, and they have an endless pit of energy that they can draw from. Incredibly affectionate and a great addition to the family, Border Collies just seem to “get it” and instinctively know what is expected of them.

Great Pyrenees are big dogs used as guard dogs. They are intelligent and can be easily trained, but they are prized for their independence, so they have a bit of a strong will. A Pyrenees is not only protective of his cattle, but of his human family, too. He does tend to roam, though, and may push his physical borders, so it is a good idea to have fencing installed.

The Welsh Corgi, or Pembroke Corgi, is one of the shorter herding dogs. It is a clever breed that is surprisingly fast and strong. Although primarily considered a herder, the Corgi is also protective of his land and his family, so he is a multi-purpose dog that can perform the required tasks for several ranch dogs.

The Australian Cattle Dog, or Blue Heeler, is an effective and well-known herder. He got the name Heeler because of his tendency to gently nip at the heels of large cattle: a tactic that helps him control his charges. He also makes a great guard dog and responds well to training, typically able to pick up new commands very quickly. He is also hardy and will work well in any weather condition.

Despite the name, the Australian Shepherd dog actually hails from America, where he was bred as a sheepdog or herder. They genuinely enjoy spending time outdoors, and like the Collie, he will work for hours on end without need a break. He is also similarly intelligent and can be taught a host of commands and jobs. Be prepared for your Aussie to try herding up the kids if he is kept as one of the family when not working.

The Anatolian Shepherd is a shepherd by name, but a guard dog by nature. He is strong and tireless, more than happy working as a companion dog to his master, and he will fiercely protect his handler and his herd from wild predators. Train an Anatolian Shepherd when he is young, and once he knows what is expected of him, he will work independently without the constant need for guidance and commands.

We have become accustomed to seeing German Shepherds as police dogs and working with the armed forces. But he makes an exceptional ranch dog and has all the skills to be a multi-purpose worker. He is very protective of his animals, is a more than capable herder, and certainly has the jaws and teeth to kill rodents and small animals. He is clever and easy to train by experienced hands, too.

The Rottweiler is another German dog that makes an exceptional multi-purpose farm dog. His size and stature, as well as his bravery, means that he can hold his own even with larger cattle. He also has a commanding bark, which is enough for most animals to listen. However, the Rottweiler needs an experienced handler: somebody that knows how to be the pack leader and Alpha dog, otherwise, the Rottie can become aggressive.

The Bernese Mountain Dog is a cattle dog that is highly skilled in guarding his herd. He is incredibly rugged and was bred to protect cattle in mountain regions. He doesn’t do well in hot climates, though, and much prefers cold and wintry conditions. He shouldn’t be used as a herding dog as he has a very strong pack instinct. He can be a bit of a roamer if left to his own devices.

Old English Sheepdogs are herders. Rather than nipping at the heels of cattle, he literally throws his weight around and tends to bump into the cattle to encourage them in a particular direction. He can grow to a sizeable weight of 100 pounds or more.

We have become accustomed to seeing Dalmatians in police and fire stations. The reason for their use in this role is because they are intelligent and very trainable. They are also fearless, courageous, and brave. They are primarily used as protectors on ranches, but they are also great companion dogs. The Dalmatian requires human company and does not fare well if left to live outdoors alone.

The Komondor certainly has a distinctive look and is commonly referred to as a “mop dog”. His dreadlocks help protect him from the cold and wet weather, although he may struggle in the heat. He is a guard dog and will protect his herd and his human family, as well as his territory. As with all guard dogs, he should be socialized early and often to prevent him from becoming aggressive.

The Shetland Sheepdog, which also goes by the names Sheltie and Scotch Collie, is another tireless herding dog. Although they are not used as often, they are as intelligent as the Collie. His staggering intelligence means that while the Sheltie is traditionally employed as a herder, he can be trained to perform virtually any number of tasks and will also make a great companion dog on the ranch and in the home.

The Jack Russell is, in some respects, a typical small dog. He thinks he is much larger than his diminutive size, and he has a bark to match his ego. The Jack Russell is an exceptional ratter, while his playful and inquisitive nature means that he is a great companion dog and will fit in just as well at home as at the ranch. He can be a bit of a challenge, though, and is likely to get into a lot of mischief. His digging ability means that he is also very difficult to keep in a single location.

The Rat Terrier is another ratter that doubles up as an excellent companion dog. They are feisty and energetic. They are expert escapologists, capable of digging and also jumping over surprisingly high barriers. They love to play and treat just about everything as a bit of a game. They do require experienced handling, but there is barely a situation that they aren’t willing to get involved in.

Ranch dogs have a lot of roles to fulfill from herder to companion and guard dog to rat catcher. At least some degree of intelligence is required from a ranch dog, otherwise, they won’t learn what is (and isn’t) expected of them. Hopefully, the list above has given you some ideas of the best farm dog for you, but dozens of other exceptionally capable working dogs can become an integral part of your ranch team.