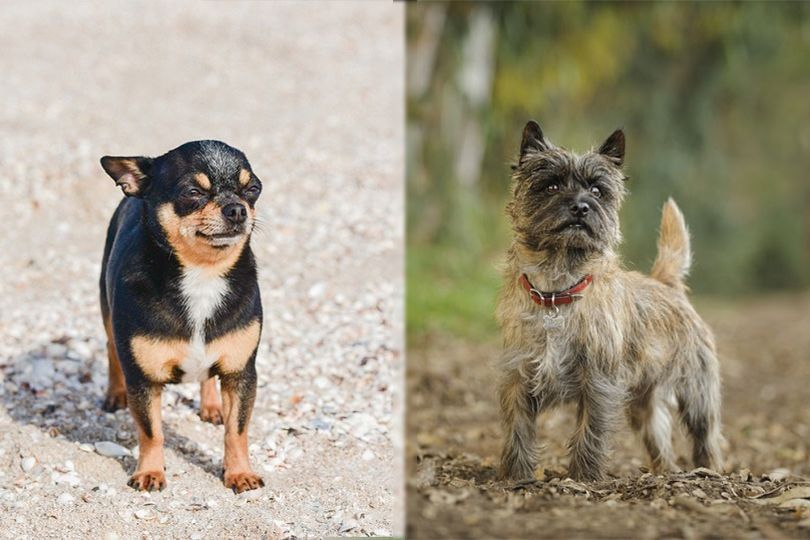 The Toxirn is a cross of the Chihuahua and the Cairn Terrier. Also called the Cairnhuahua, Cairnchi, Cairin-Chi or a Cairn Terrier/Chihuahua Mix, he is a small mixed breed with a life span of 12 to 15 years. He has talents in agility, watchdog and tricks and is a very loyal and devoted dog but can have an aggressive side.

Where does the Toxirn come from?

The Toxirn is one of the recent additions to the a long line of designer dogs to have been bred over the last two to three decades. Designer dogs are purposely bred first generation mixed dogs. Most have two purebred parents and a name that blends those parents names together. Some are bred by good breeders but unfortunately there are a lot being churned out with no thought or care by terrible breeders, puppy mills or just ignorant people. Take care who you buy from and keep in mind that despite the promises in most cases there is little control to be had over first generation breeding so the puppies might have the best of two dogs, but they also might have the worst, or something more mixed. That is true of personalities as well as looks. With no origins known about the Toxirn which is something else most designer dogs have in common, we look at the parents first for an idea.

The Toxirn is a very loyal dog. He forms very strong bonds with usually one member of the family though he will still be friendly to the rest of the family. He is brave, lively, loving and very confident. He does however have aggression issues sometimes which most Chihuahuas and Chihuahua mixes have. He can snap and he is wary of strangers and very protective. He loves to cuddle with you in your lap and is quite sensitive. He does not like being left alone and can be distressed if you are harsh with them. When it is not nap and cuddle time he enjoys being active and playing. He can be very demanding when it comes to wanting your attention.

This is a small dog weighing 6 to 18 pounds and standing up to 10 inches tall. He has a strong though small body with black eyes and large triangular erect ears. His coat can be double or single, short or medium in length, harsh or soft to touch. It really depends on which parent he takes after. Common colors are grey, white, brindle or black.

How active does the Toxirn need to be?

This is a fairly active dog and while he is small enough to adapt to apartment living if there is a yard for him to play in that would be great. Take him out for a couple of medium to long walks a day and for visits to a dog park where he can socialize and go off leash and run free. Make sure he gets mental and physical stimulation.

The Toxirn varies in how easy he is to train, some find him moderately easy and some find the Chihuahua side to him makes things a bit harder and more interesting! Remember that early training and socialization are a vital part of owning a dog. It will make him much better around other people, animals and dogs, make him easier to control, curb the aggression and make going out with him a lot more relaxed. Use positive techniques like rewards, treats and praise. Be consistent, patient and firm so that you are clearly the pack leader not him. A lot of owners of small dogs fail to have their dogs trained or socialized properly thinking because they are small and cute they can be handled. But all dogs regardless of size need to be trained and socialized.

There will be a moderate amount of grooming and maintenance needed to keep the Toxirn healthy, looking good and happy. He sheds a low to moderate amount depending on the coat he has. He may need some trips to a groomers if his hair needs trimming or stripping. He can be hypoallergenic as the Cairn Terrier is. This is more likely if he has a wiry coat. Brush it two to three times a week and bath just when he needs it using only a dog shampoo. Avoid bathing too often as it damages his skin’s natural oils. Give his teeth a brush at least twice a week, his ear a clean by wiping them at least once a week and his nails will need clipping when they get too long. This is not something to be done by someone who has no experience so if needed, leave to the groomer.

He can be good with children but he needs socialization and thing like being raised with will help. He is best not left alone with small children as should they startle him or prod and tug at him too hard he may snap. He can be shy around other pets or he may see then as something to chase. He can also challenge other dogs, he does not care about his size versus theirs. It is important that he is socialized to improve how he interacts with all of them.

The Toxirn can be alert but it varies so while some may make great watchdogs, others may be less reliable. He can also be an occasional or frequent barker. He should be fed ½ to 1 cup of good quality dry dog food each day, split into at least two meals.

There are health issues he can inherit from his parents such as Patellar Luxation, Hypoglycemia, Heart problems, Open Fontanel, Collapsed Trachea, Hydrocephalus, Liver problems, Craniomandibular Osteopathy, Cryptorchidism, Krabbe’s disease, Hypothyroidism, Legg-Calve-Perthes Disease, Eye problems and Shivering. There a couple of things you can do to better raise the odds on having a healthy dog. Visit the puppy before you buy and ask the breeder to show you health clearances for both parents.

Costs involved in owning a Toxirn

The Toxirn is not a common designer dog out there so there are no current prices to be gathered for one. Initial costs like a crate, carrier, collar and leash, blood tests, check up, deworming, vaccinations, neutering and micro chipping come to between $360 to $400. Medical annual costs start out at $435 to $535 for just vaccinations, flea prevention, pet insurance and check ups. Non-medical annual costs start out at $265 to $365 for things like training, license, food, treats and toys. If he needs stripping or more regular trips to a professional groomer this could be more.

Looking for a Toxirn Puppy Name? Let select one from our list!

The Toxirn is a great dog if you want one with personality, liveliness, loyalty and playfulness. But he is not a natural around children, other pets and other dogs and will need early socialization and training. Give him the love and attention he will demand he will be your best friend for life.