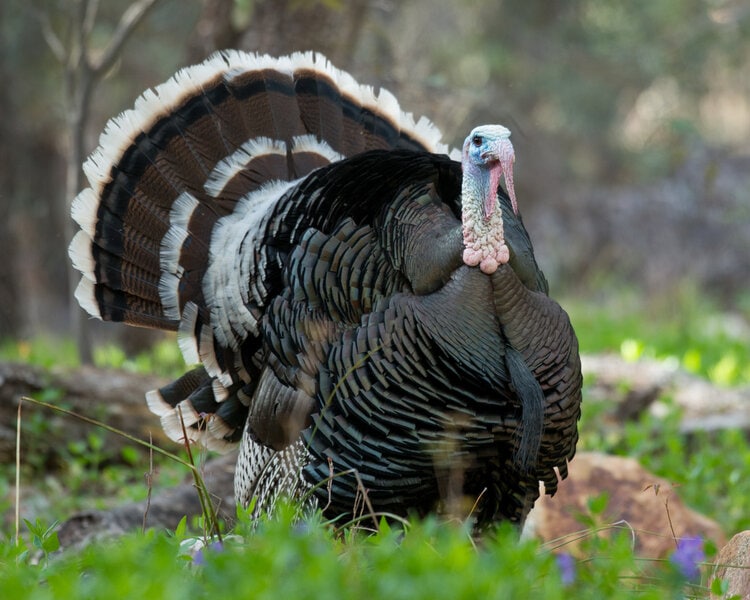 Many people consider a turkey — wild or farm-raised — to be a tasty treat for their Thanksgiving dinner and nothing else. There’s more to these birds than a special addition to your holiday meal plan, though.

We put together these fun facts about turkeys so you can learn more about this humble bird and share new knowledge with your family.

Although most people are used to seeing flightless domesticated turkeys wandering around farms, wild turkeys can fly. They don’t fly south for the winter like other birds, though. Turkeys can only fly short distances — 0.25 miles is about the farthest distance that their wings can carry them.

Wild turkeys can reach 55 mph when they do spread their wings. Even though they can only soar for short distances, they can do so impressively quickly.

As land-based birds, turkeys can run quite fast: 25 mph is the top-recorded speed that turkeys can reach when running.

In the early 1800s, wild turkeys were almost hunted to extinction. Their numbers were so low, in fact, there were no turkeys in Connecticut by 1813 or Vermont by 1824. Conservation efforts were started in the 1970s to save the species, and since then, turkey numbers have increased exponentially. The population is still considered unstable due to hunting and other issues, though.

5. Their vision and hearing are their strongest senses

Although turkeys aren’t great at seeing at night, they rely on their powerful vision in daylight. They also have impressive hearing, so these birds are hard to sneak up on. As prey animals, turkeys have these well-developed senses to keep them alive in the wild.

One of the most well-known facts about turkeys is the “gobble” sound that they make, which is like a loud and quick gurgling. But not all turkeys make this noise — only the males do. It’s primarily a mating call reserved for spring and lets any nearby hens know that a male turkey is in the area.

Unlike baby chickens and their name of “chicks,” baby turkeys are called “poults.”

9. You can determine a turkey’s sex from their poop

As strange as it sounds, you can tell the sex of a turkey that you’re tracking by simply studying their droppings. Hens leave spiral-shaped droppings, while gobblers leave elongated J-shapes.

Related Read: Male vs Female Turkeys: How to Tell the Difference

10. There are six wild turkey subspecies

With so many wild turkeys wandering the States, it’s no surprise that several subspecies are scattered around. Depending on where you live, the wild turkeys that you have available for hunting could be any of these six subspecies:

The “snood” is a long red ornament that grows from the forehead and over the bill. For male turkeys, this ornamentation is both a sign of how healthy they are and their way of attracting a mate. A study in 1997 found that female turkeys prefer males with longer snoods.

12. Turkeys can be aggressive

Like many other wild animals, turkeys can and will attack humans. While they might not look like prizefighters, they’re not afraid to tell you off if you get too close, especially during the breeding season. With their size and speed, they’re intimidating animals.

Their known aggression has even led to the Massachusetts government offering tips on how to avoid fights with turkeys.

Although he only wrote his opinion in a letter to his daughter rather than express it to the public, Benjamin Franklin considered the turkey to be “a bird of courage” and far more respectable than the eagle. Contrary to popular belief, though, he never suggested the turkey as a symbol for the United States.

These days, it’s traditional for the President of the U.S.A. to pardon a turkey and therefore, save it from the Thanksgiving dinner table. This practice isn’t as old as you might think.

The act of pardoning turkeys was first introduced by George H.W. Bush in 1989. While taking part in a photo-op with a 50-pound turkey, he started a new tradition by pardoning the turkey for looking “understandably nervous.”

15. The world record for turkey carving is 3 minutes and 19.47 seconds

In 2009, Paul Kelly from Little Claydon Farm in Essex, U.K., beat a local butcher in setting a new world record. He successfully carved a turkey in 3 minutes and 19.47 seconds.

16. The name “turkey” comes from the word for guinea fowl in Turkish

Despite originating in North America, turkeys got their name when they became popular in the U.K. The English called them “turkey-cock,” which was the name used for guinea fowl in Turkish lands.

Although they’re more commonly known as additions to Thanksgiving or Christmas dinners, turkeys are more than what their appearance suggests. Not only do they have a rich history of their own, but there are also many things about these birds that not many people know about.

With this list of fascinating facts, hopefully, you’ll remember to be thankful for turkeys too!