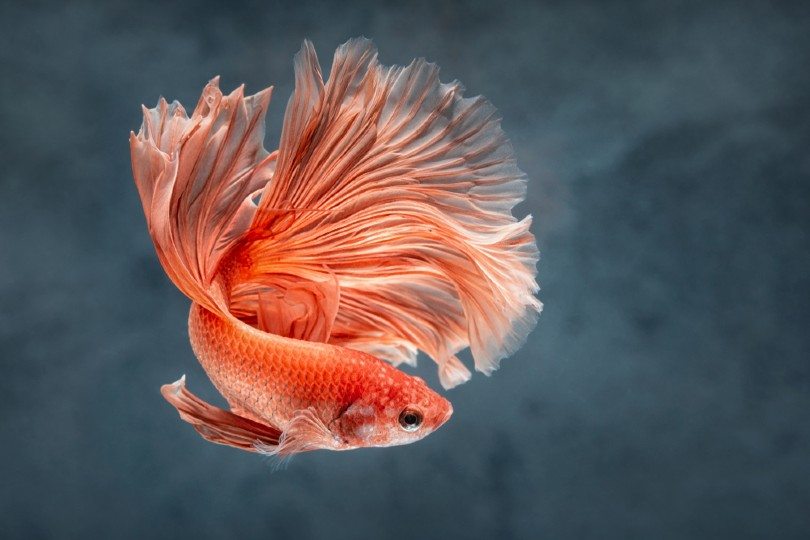 Few fish have captured the interest of so many people from around the globe than the Betta, or more correctly, the Siamese Fighting Fish. Its aggressive behavior with its flaring gills is striking enough on its own. However, selective breeding has taken this aquatic denizen into new realms of colors, types, and patterns that are just as dazzling.

If you’ve ever owned a Betta, it was probably a Veiltail. The distinctive feature of this fish is its long flowing tail fin. It’s even more attractive if it is a lovely color, such as Super Red or Super Blue. This tail allows the Betta to swim seemingly effortless in your tank.

The Delta Tail resembles a folding fan, with its narrowest point at the tail and flowing around the back of the fish nearly 180 degrees. It is not as long or flowing at the Veil Tail. Nevertheless, it is still a gorgeous variation on this theme.

The Comb Tail is an unusual variation on the Veil Tail. It has larger fins, too. However, there are also extended rays on all the fins that look like, well, a comb, and hence, the name. You might even think that something is wrong with the fish because of its appearance.

The Crowntail is quite similar to the previous type. However, the length of the rays is noticeably less but still evident on the fish. All the fins have these extensions, too. The overall look resembles the points on a crown. When compared to the Comb Tail, it looks neater as if the rays were trimmed.

It’s almost hard to tell where the body of the fish ends and the tail and fins begin with the Rose Tail Betta. They form a half-circle toward the back with extended rays that add elegance to the appearance of this fish. It’s most compelling when it is bi-colored.

The Dumbo or Elephant Ear Betta almost doesn’t even look like this species of fish. Its tail fin is relatively small when compared to the previous variations. Instead, it has larger pectoral fins near the head of the fish that give it its unique, albeit fitting, name. Often these appendages are paler in color, which completes the look.

The name, Plakat, is a nod toward the Betta’s native Thailand with the moniker the people use there for the Siamese Fighting Fish. This one differs from the others we’ve discussed because of its short fins. They have a rounded appearance that makes them look like one continuous appendage. It won’t be difficult to mistake it for a Goldfish, especially if it is Koi or Orange colored.

The name Black Orchid describes both the color and appearance of the fins. They also extend around the back of the fish, with a neat appearance. As the name implies, the fish is dark with lighter white rays extending from the tail. It looks just like a flower in bloom.

We saved the best one for the last. Thai Flag describes both a palette and pattern of colors, depicting red, white, and blue. Each one appears in bands in all the fins. Small rays extend from them, which complements the markings. The selective breeding of this specific fish is fitting, given that the Siamese Fighting Fish is Thailand’s national aquatic animal.

If you thought Bettas were boring, think again! As you’ve seen, there are gorgeous variations of this familiar aquarium fish that are sure to turn heads. The range of colors and patterns has also grown to include lavender, copper, and marble. In all its glory, the Siamese Fighting Fish is worthy of a tank with just one fish to showcase its beauty.