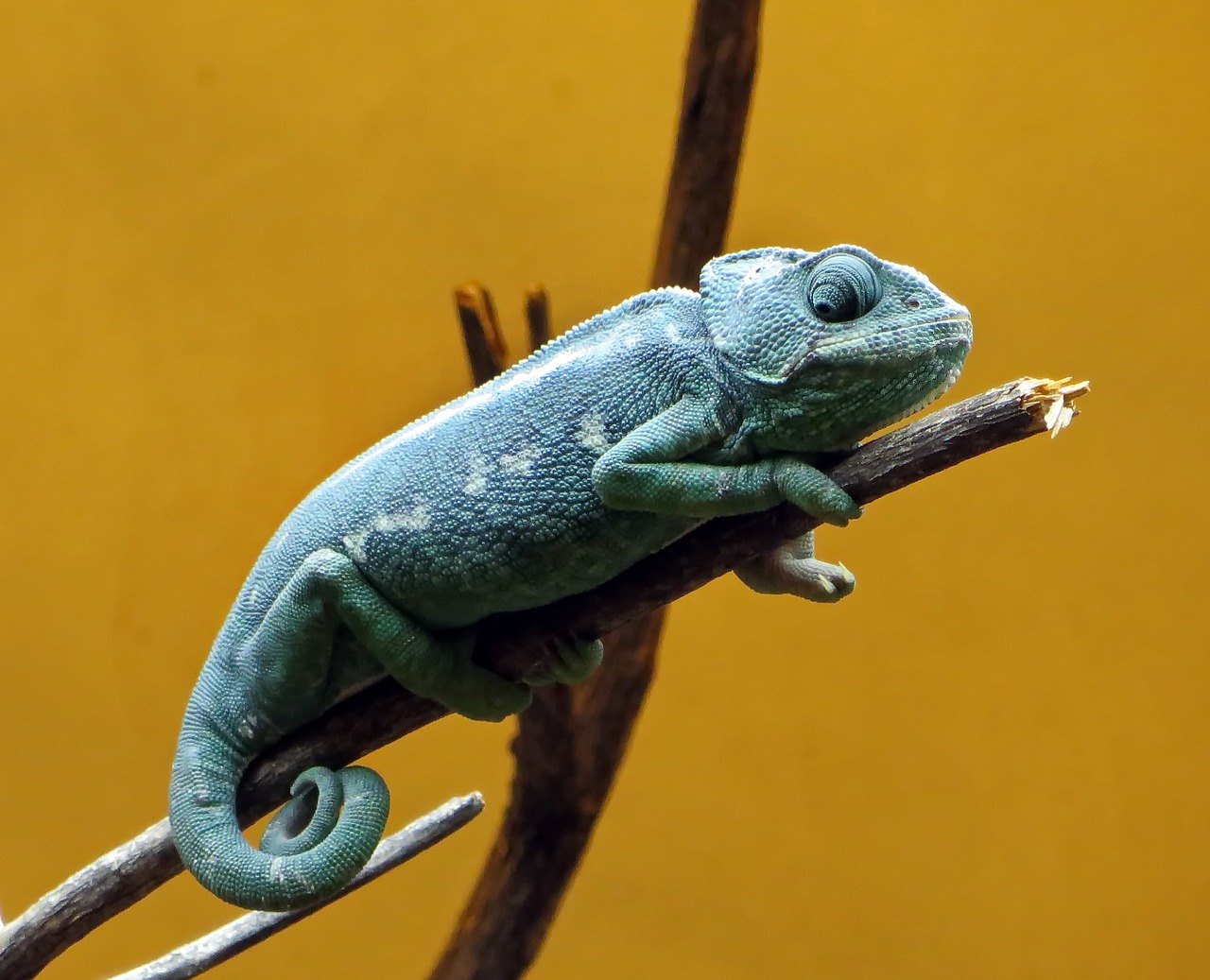 There are over 200 different species of chameleons worldwide, but only a handful of these are commonly kept as pets. Chameleons make unique and beautiful pets, but many require special care and attention in order to be happy and healthy.

It is highly recommended to find a captive-bred chameleon, as they are depleting in natural populations due to pollution and destruction of habitat. They are easily bred, so there is no good reason to take one from its natural habitat.

We’ve put together this list of the 10 most common varieties of chameleon kept as pets, to help you get familiar with the various types.

Size: Up to 5 centimeters

Lifespan: Up to 5 years

The Veiled Chameleon, also known as the Yemen Chameleon, is one of the most popular chameleons kept in captivity. It gets its name due to the unique cone-shaped protrusion on its head, called a casque. This and their bright, vibrant coloring give them a beautiful, striking appearance. They are one of the larger species of chameleons, and their calm nature makes them perfect pets for the first-time chameleon owner.

The Panther Chameleon has become a highly popular pet chameleon in the last decade. This is due to its wide array of beautiful colors and unique personality. Captive-bred Panthers are fairly hardy but have relatively short lifespans. They have an abundance of color and pattern variations, from bright blue to beautifully multicolored, with the males claiming the widest range of color possibilities. They will change colors dramatically when facing a rival male, while the female generally has softer hues when ready for breeding.

Pygmy Chameleons, which are a small breed of chameleon belonging to the class Rhampholeon, originate from Central East Africa. As their name suggests, they are the smallest species of chameleon, with a maximum length of around 8cm. There are around 19 different species of Pygmy, and there are several that are popular as pets. They differ from many other species in color, as they don’t have the bright and bold colors of blues and orange like others do, but they are more commonly found in different shades of brown and grey. Pygmies also differ in that they have short, stumpy tails, due to living terrestrial lives mostly on the ground and not needing curly tails to grip onto tree branches.

The first thing you’ll notice about a Jackson’s Chameleon are the three brown horns on its head, making it resemble a Triceratops. Two horns are located on top of its head, while the third one emerges from the nose. These horns are found on males only. They are generally a bright green color but will change to bright yellows and blues when courting or defending their territory and may even turn black when in distress. They will also puff up and hiss when challenged but make great pets, as they don’t mind being handled. They have an incredibly strong and long tail, which allows them to support their entire bodyweight.

Coloration: Bright green with patches of yellow and black

The Fischer’s Chameleon, also known as the Two-Horned Chameleon, originates from the Kenyan and Tanzanian rainforests. They stand out due to the two horns on their nose, known as tubercles. They are easy to care for, with no special requirements; however, males will fight if housed together. They are a shy and docile species and love lush and green environments that mimic their rainforest origins.

The Carpet Chameleon, also known as the Jeweled Chameleon, originates from Madagascar and gets its name due to its resemblance to the patterns on an oriental carpet. Like most other chameleons, their colors stand out when courting or when threatened by a rival. They enjoy being handled and are easy to care for with no special requirements. They have a short lifespan, no longer than 3 years, though specimens in captivity will generally live longer.

The Oustalet’s Chameleon, also known as the Malagasy Giant Chameleon, originates from Madagascar, lives a sedentary life, and in fact, barely moves unless absolutely necessary. Their most distinguishing features are a large ridge that runs along their snout to their eyes and triangular spines that run from the back of their neck to their tail. They are more suited to experienced chameleon keepers due to their large size and space requirements. They are one of the world’s largest species of chameleon and can grow as big as two feet long.

The Meller’s Chameleon, or Giant One-Horned Chameleon, is a beautiful species and one of the largest in the world. It is easily recognizable due to its large size, single front horn, and bright green and yellow coloring. When Mellers are threatened, they undergo a massive color change: Their green color darkens to almost black, and they can become covered in black spots. They are definitely not for first-time chameleon owners, as they require special attention and a large amount of space.

The Four-Horned Chameleon, also known as the Cameroonian Bearded Chameleon, is recognizable not only due to its four protruding horns but also its scaly “beard,” large crest, and sail fin. They originate from Cameroon in Central Africa and love moist, cool conditions. They are highly sensitive and fairly difficult to look after and require high amounts of humidity or are otherwise highly susceptible to dehydration or respiratory illness. However, if their needs are met, they are hardy species that are well-worth keeping.

Lifespan:  Up to 5 years

The Senegal Chameleon is another popular pet chameleon. It hails from West Africa and requires special care, as it is quite fragile. Their most distinguishing features are their small neck flap and bright neon green coloring. They are often caught in the wild and are an abundant and easily caught species. However, wild-caught species are often highly stressed and full of parasites and should be avoided. They need a large amount of humidity in their enclosure, which should preferably be a screened type to provide air movement.

Chameleons are beautiful creatures, with many unique and interesting traits. They can be a big responsibility to look after depending on the species you choose to keep and are a big commitment, so you’ll need to make sure you have the time and resources before making the leap.

That said, they make great pets and are entertaining and beautiful creatures to observe.