10 Types of Donkey Breeds (with Pictures) 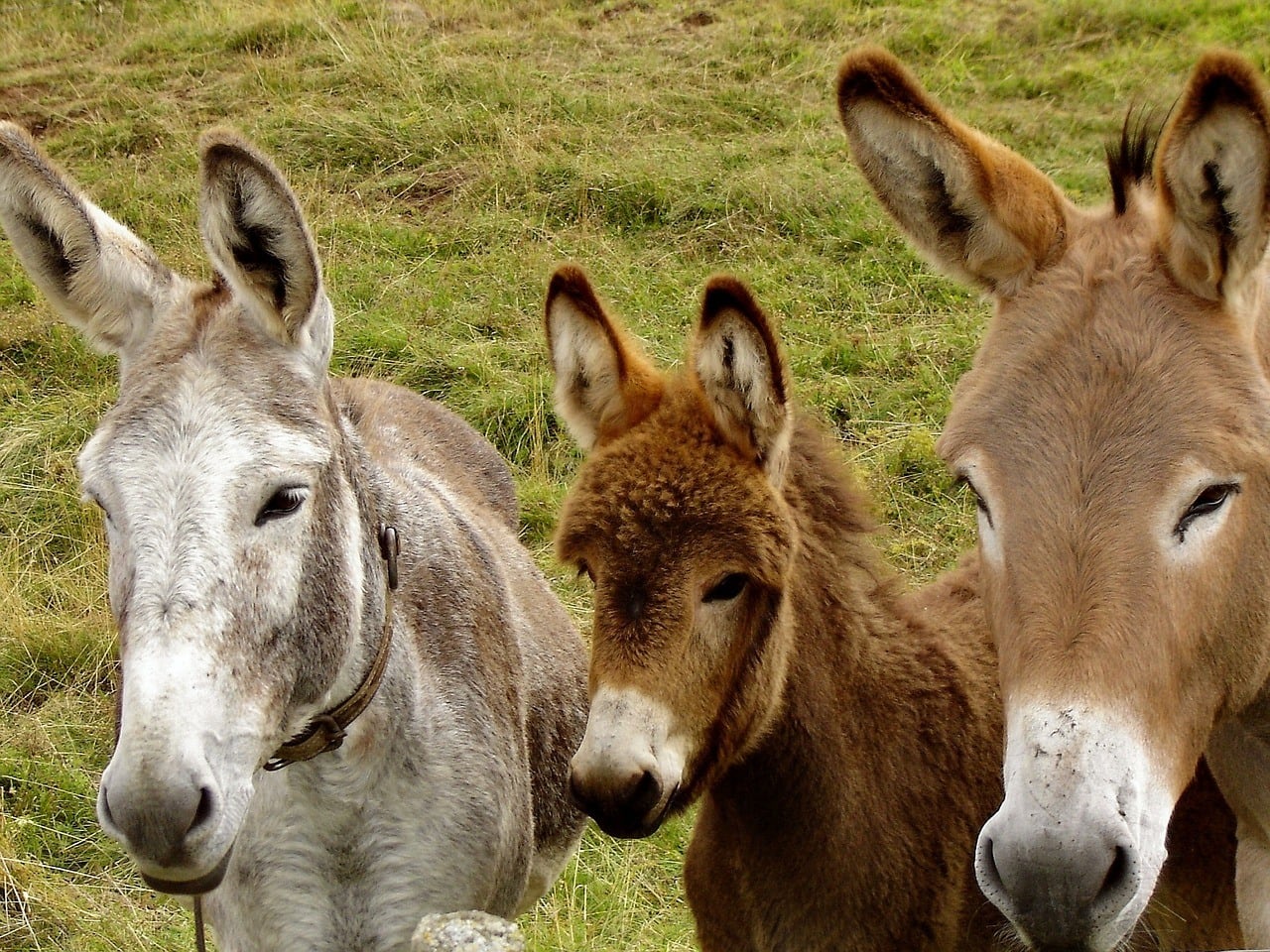 Throughout the world, there are more than 50 million donkeys and mules, the close cousin of the donkey. Originally created as beasts of burden, these strong, durable animals are often treated like horses, though they’re far different in every conceivable way.

Known as steady and reliable creatures, donkeys are friendlier and easier to care for than horses. Even better, they live longer on a smaller amount of feed, making them far less costly to keep than horses, which is a major reason for their popularity worldwide. In fact, there’s a saying among farmers that donkeys can get fat on air, which speaks to how little feed they require. First domesticated about 5,000 years ago, donkeys have lived alongside us for millennia, and like us, they’ve developed differently across the planet.

Like all creatures, donkeys come in several different varieties. But unlike many similar animals such as horses, donkeys aren’t always classified by breed. That’s not to say that different donkey breeds don’t exist; they do. However, in the United States at least, we don’t generally classify donkeys by their breed. Rather, they’re classified by their physical characteristics, including size, color, and coat texture.

Still, there are distinct breeds of donkeys that can be found in different areas of the world. Many of these breeds are simply named for the region in which they can be found. In most places, donkeys are just donkeys and there aren’t multiple types, though regional differences have manifested into drastically different donkeys.

In reality, there are quite a few different types of donkeys, but purebred specimens of any type are very difficult to come across. Unlike horses, distinct donkey breeds don’t seem to matter much, so donkeys have been bred and crossbred repeatedly until most specimens became “mutts,” for lack of a better term.

The 10 Types of Donkeys

As we mentioned, there are some specific donkey breeds, though, in the United States, donkeys are categorized more for their physical characteristics. On this list, you’ll find both American donkeys categorized by their appearance and size, as well as some of the most common true donkey breeds that can be found in other parts of the world. This list is in no way exhaustive, but it will give you a good overview of the most commonly seen types and breeds of donkeys.

When most people think of a donkey, this is the animal that comes to mind. After all, standard donkeys are, well… the standard! This is the average donkey, standing 3–4 feet in height at the shoulder with a stoic, calm attitude. They’re strong, hardy, friendly, and make excellent pack animals or companions for other livestock. Considered to be one of the most versatile of all donkeys, they’re great for just about anything except riding, which they’re too short for.

As you could probably guess, miniature donkeys are on the smaller side. In the US, if a donkey is less than 3 feet tall at the shoulder when fully mature, it’s a miniature donkey. Aside from the size, they’re very similar to standard donkeys. Miniature donkeys have the same docile, laid-back temperament that makes them great for many uses, though many people just keep them as pets because of their perceived cuteness.

If miniature donkeys are smaller than standard donkeys, you could likely assume that mammoth donkeys are the opposite. These are the biggest donkeys of all. Males stand at least 4.6 feet tall and females are at least 4.5 feet. What’s special about mammoth donkeys is their intended purpose. Originally, mammoth donkeys were created to breed with horses, which resulted in the creation of mules. Of course, once people realized how hardy and sure-footed mammoth donkeys are, they started being used for riding. They’re not as skittish as horses and are generally considered to be safer and easier to ride.

A burro is not a specific breed of donkey. In truth, burro is simply the Spanish word for donkey. But most of the time, at least in the US, the word burro is used to describe a wild donkey. In America, the Bureau of Land Management will occasionally gather large numbers of these burros, which they auction off for incredibly low prices. Like other donkeys, they make great companion animals and can even be used for hauling purposes. Generally, burros are about the size of a standard donkey, so they’re not a good choice for riding. Also, since they’re wild, a burro will require substantial training before it’s of much use.

You’d be hard-pressed to locate a Poitou in America, though they do exist. This is an actual donkey breed, hailing from France. They’re not just rare in America though; there are only a few hundred of these donkeys in the entire world. This breed features a special long coat known as a cadenette that sets them apart from all other donkeys and makes them easy to identify. In summer, these donkeys molt the undercoat, which can get tangled in the outer coat without some external aid.

Spotted donkeys can be any size; the defining characteristic for one is their instantly identifiable spotted coat. While most donkeys are brown or gray, spotted donkeys stick out with coats that are mottled and eye-catching. This is the result of genetic mixing, and it’s not something you can create with surety. Some breeders have been breeding spotted donkeys for many decades, but because the offspring of two spotted donkeys aren’t always spotted, they’re still quite a rarity.

Hinnies aren’t true donkeys. They’re sort of like mules, only reversed. If that doesn’t make sense, it’s about to. Mules are made by crossing male donkeys and female horses. But Hinnies are made the opposite way, by crossing a female donkey with a stallion. This results in a smaller animal, but aside from this one difference, mules and hinnies are very difficult to differentiate.

Similar to Poitou donkeys, Grand Noir du Berry donkeys come from France; this time from the Berry region. These are rather tall donkeys, standing about 4.5 feet tall on average. Their coats are bay brown, dark bay brown, or black, with underbellies and inner forearms and thighs displaying a white or gray color that’s also seen around the eyes. In France, these donkeys are still commonly used for farm work on smaller farms, but they’re also popular with tourists for carrying luggage on hikes.

You’ve probably heard of an Abyssinian horse, but Abyssinian donkeys aren’t as commonly known. These donkeys are quite common in Ethiopia, though. They weigh 190-450 pounds and stand 2.6-3.3 feet in height with long lifespans of 30-40 years. Generally, they’re gray in color, though some are chestnut-brown. You’ll rarely see these donkeys outside of their homeland of Ethiopia.

Donkeys were never very popular in most of Britain, though they were widely used in Ireland. Often called English or Irish donkeys, the same breed can still be found in Ireland today, though they were also imported into New Zealand where the breed is being further established. Being small donkeys, they stand no more than 3.6 feet tall, but they can come in a wide range of colors.

Only the biggest of donkeys is usable for riding purposes, but that doesn’t mean that these aren’t useful creatures. Hardy and reliable, donkeys have long been used for draught work and hauling purposes. While there are some breeds to be found across the world, in America, these animals are classified by their physical traits; namely, size and coat. You’ve just read about 10 of the most common types and breeds of donkeys, but there are plenty more out there for you to find if you look hard enough!