10 Beautiful Types of Huskies (With Pictures) 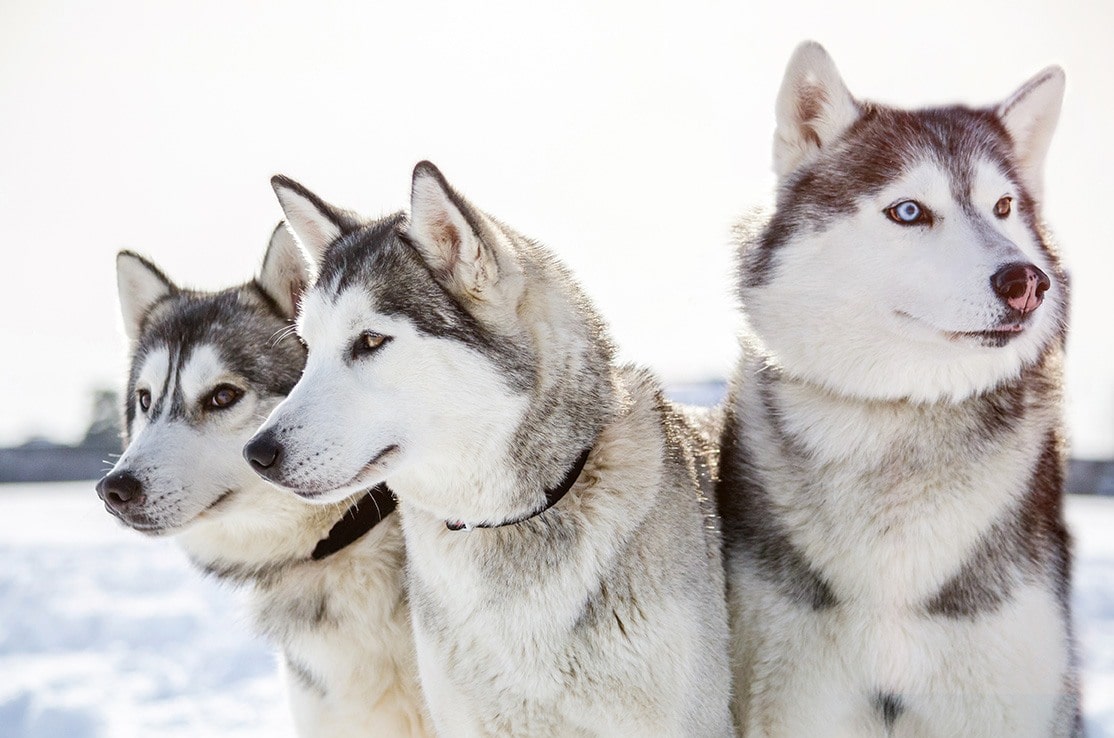 The Husky is a popular dog that was bred in the far North to make a superb sled-pulling dog. The term was given to the dogs by English sailors when they encountered a people who they inaccurately called “Eskimos.” The sled dogs that the Inuit people kept were broadly named “Huskimos,” and the more common term became the shortened version of this, “Husky.”

The dogs included below are pups that are true sled dogs, except for the Miniature Husky. Their inclusion on this list is because they are directly and purely descended from the larger Siberian Husky.

The Siberian Husky is an extremely affectionate breed that quickly warms up to and loves all humans. They are frequently just as friendly with other animals. These dogs are smaller than a Malamute and often less fluffy, although it can be easy to confuse the two.

Siberian Huskies typically weigh between 35 and 60 pounds and from their shoulder, are between 20 and 23 inches tall. They have a wolf-like face, with erect ears and piercing blue eyes. They can also have mixed retina colors.

Siberian Huskies are beloved for their quirky and vocal personalities. They love a good howl when music is on or when a siren is passing. They tend to be stubborn and will tell you about their displeasure. These strong-willed dogs are not suitable matches for first-time owners, and they need experienced handlers to be trained well.

The Malamute is one of the large Husky breeds and weighs between 75 to 100 pounds. They stand slightly taller than the Siberian, at around 23 to 26 inches from their shoulder to the ground. These dogs are also more aggressive toward other animals, but rarely to humans. They can be trained to be a guard dog but will need to be taught to safely express their distrust of strangers.

The Malamute is a brilliant dog that originates from the region around Alaska. These smart dogs often have a strong-willed personality with a sizeable stubborn streak. They need an owner who will be assertive and has experience handling large and stubborn breeds.

The Chinook is one of the more elusive Husky breeds to find. They are also a newer breed compared to the more extended lineages of some of the others on our list. They look like a Husky but have a golden and brown mixed coat instead of the more typical black and white fur.

Chinooks are a rare breed that comes from a cross of a Farm Dog and Husky. They were bred as sled dogs in New Hampshire. They were also bred to be a guard dog, particularly for other animals coming in to raid a farm. That makes them excellent watchdogs, even if they are not particularly aggressive to humans.

These pups do well as members of a family that include children. They tend to be more obedient and less stubborn than many other Husky breeds.

Unlike what its name suggests, the Labrador Husky is not a mixed breed between a Labrador Retriever and a Husky. Instead, they share many of the physical characteristics of a Lab, hence the name.

These dogs were originally bred in Northern Canada as sled dogs and hunters. They are not as friendly toward other animals because they have inherited a strong prey drive.

Labrador Huskies are a medium-sized breed that can grow to a height of about 20-28 inches from the shoulder to the ground. They are muscular dogs that weigh between 60-100 pounds and live between 10 to 13 years.

The Alaskan Husky is an interesting breed to throw into the mix. They originate from Alaska but look incredibly similar to the Siberian Husky. There are theories that their shared ancestors crossed before the connection between Alaska and Russia was submerged.

The AKC does not recognize the Alaskan Husky as an individual breed. However, they are still bred as such. If you are trying to figure out the difference between them and the Siberian Husky, look for a height difference. They are typically taller than a Siberian, although they don’t differ in many other ways.

The personality of an Alaskan Husky tends to be friendly and charming. They are lovers and will get along with other animals and humans in a heartbeat. These dogs tend to be less stubborn than Siberians, making them easier to train.

The king of the fluffy double coat inherent to the Husky breeds is the Samoyed. They have an especially poofy coat that is full of long, white hairs. They are a breed entirely separate from a Siberian Husky but do look similar to them. The Samoyed typically stands between 19 to 24 inches tall and can weigh between 35 to 65 pounds, although the average is closer to 55 pounds.

Samoyeds might be smaller than some of the other Husky dogs, but they were still bred and treasured sled dogs. Their fluffier than fluffy coats give them the capacity to withstand living in minus 60-degree weather. They are friendly, although they can also be territorial if they are not socialized.

The American Eskimo Dog also has a somewhat deceiving name. They originally come from Germany. Their ancestors are thought to be the Eskimo Dog and the German Spitz. They have pure white fur and look somewhat like a miniaturized version of the Samoyed, although they are an entirely separate breed.

The history of their name is interesting. Although they were a beloved breed in North America before the World Wars, their demand later suffered because of their German association. It was during the first World War that their name was changed to the American Eskimo Dog.

These happy dogs are covered in white fur and commonly come in three different sizes: toy, miniature, and standard. They can stand between 9 and 12 inches tall and weigh between 6 and 30 pounds.

The American Klee Kai is one of the newer breeds on our list. They were only bred about 40 years ago by Linda Spurlin. She wanted to create a breed that was effectively a companion version of the larger Alaskan Malamute. Thus, she named the dog Klee Kai, since it means “small dog” in Inuit.

The Klee Kai appears to be a miniaturized version of the Siberian Husky. They have a similar coat in both length and color. Their heads have much more of a wedge shape than a Siberian. They also come in three different sizes, running from toy to miniature, and then a standard size. They can stand between 13 and 17 inches tall and weigh between 10 to 20 pounds.

The Greenland Dog is also called the Canadian Eskimo Dog, even though these two breeds should be seen as distinct because they were developed in different parts of the world. They are genetically identical, though, having shared ancient ancestors.

These pups are a large Husky breed brought over to North America from Siberia about a millennia ago by the Thule people. They are a boisterous and powerful breed. They often have shorter legs than those of the Siberian Husky and more robust bodies.

These dogs can be territorial but are typically friendly. They are loyal to their masters, although they can exhibit serious stubbornness due to their independent personalities.

Finally, we have the Miniature Husky. Including them on our list of true sled dogs is a bit of deception, since the Miniature Husky is the same as a Siberian Husky. However, it is the development of the smallest Huskies in each litter being bred together to create a smaller strain of the parental breed.

These pups share the same characteristics as their parent breeds. However, they do tend to be easier to handle because they are smaller.