13 Types Of Mountain Goats (with Pictures) 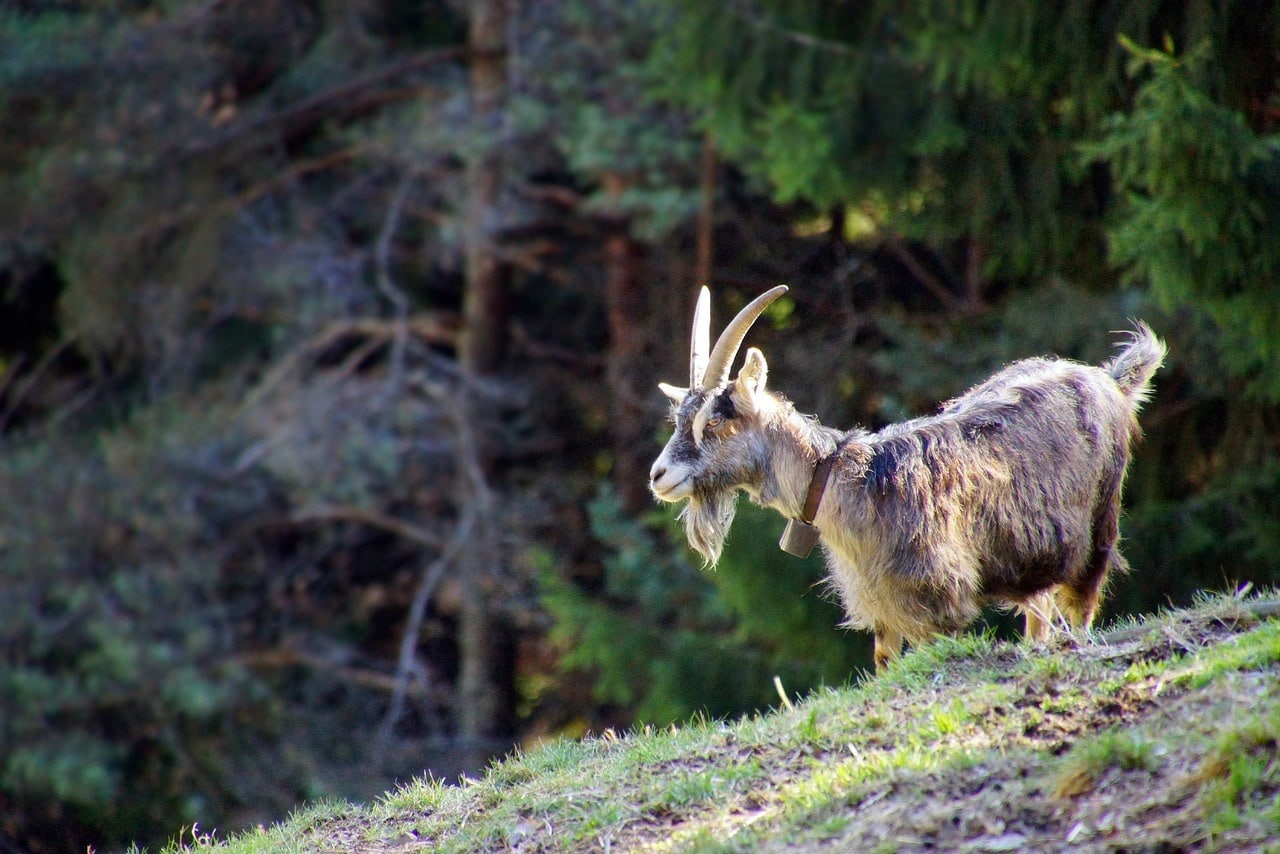 Although not strictly a goat, the mountain goat is an herbivore and a herd animal. It lives wild in the mountains and hills of various countries. One can weigh up to 300 pounds, jump several feet in the air, and can live up to 12 years. There are discernible differences between the mountain goats of different regions, and below we have listed 13 types of this mountain dweller, as well as their characteristics and traits.

The Alpine is a large goat that has been bred to be a prolific milk-producer. They originated in the French Alps and they come in virtually any color. Their milk production makes them a popular dairy and farming goat, and they are more often found at homesteads or farms, rather than living wild in the mountains. This is helped by their docile nature and the fact that their milk is considered more nutritionally beneficial than that of the Saanen goat, which is the most popular milking goat.

The Altai is also a domestic goat but it was first bred in the Gorno-Altai Autonomous Soviet Socialist Republic, in the former Soviet Union where local goats were bred with the Don goat. The Altai has a high wool yield and is a medium to small breed. They are hardy and they can resist the cold weather, which was essential for the cold nights. The wool can be black, dark brown, or gray.

The Booted Mountain goat, also known as Stiefelgeiss, is a rare mountain goat breed. Estimates suggest there are less than 1,000 of this breed left. They originate from the St. Gallen hills in Switzerland. The region is known for its snow, and the Booted Mountain goat has adapted to the weather with a long coat. The long coat is not shaggy, and the breed is making a muted comeback thanks to the efforts of the Booted Goat Breeders Club of Switzerland.

The Carpathian goat, which is also known as the Koza Karpacka, hails from the Carpathian Mountains of Eastern Europe: a region that includes the freezing hills of Slovakia, Poland, Ukraine, and Romania. The goat is usually white-colored, although there are fawn and brown examples, too. They have long hair to help combat the cold weather, however, this breed is in serious danger of extinction. A program to protect the remaining few dozen of this breed was introduced in 2005. In 2012, only 40 females were registered.

The Ciociara Grigia is a domestic goat. It is known to have originated in the area of Frosinone, near Lazio in Italy. In particular, this long-haired breed, with a name that translates as “Two Women Grey”, is grey or silver-grey in color. They can be found with and without horns and are raised for their prolific milk production and meat. There are fewer than 700 registered Ciociara Grigia goats left in Italy currently.

The Changra goat is also referred to as the Pashmina goat. It lives in the ice desert of Changthang in Tibet and it is highly regarded for its beautifully soft fur. Living in temperatures that routinely fall well below zero, the Changra goat has developed a very long coat that is surprisingly supple for something so thick and protective against the cold. It has an undercoat with hair that is eight times finer than human hair. It is roughly eight times warmer than sheep’s wool, and the resulting Pashmina wool is one of the most expensive cashmere wools in the world. Gathering and preparing the wool is a very long and painstaking process, usually completed by hand, and is one of the reasons that this Pashmina is so expensive.

The Irish Mountain goat is a domestic breed of goat that is reared for both its meat and its milk. It is considered a dangerously endangered animal and is believed to only exist as a feral population. Both sexes of the goat are horned and bearded and the goat may have black, grey, or white coats. There was still a population of more than 6,000 of this breed in domestic stock in 1994, but now there are none.

The Rocky Mountain goat, more often referred to as the mountain goat, is an alpine goat that is exceptional at climbing and walking up steep faces. It is believed that they originally come from somewhere between Tibet and Mongolia. The modern iteration of the goat now lives in the Rocky Mountains and the Cascade Range, as well as various other locations in North America. They live at high altitudes, although they do descend to sea level occasionally.

The Sempione goat was found in the mountains of Piemonte, in Italy. They have, on several occasions, been classified as extinct, but there are currently reports of between four and 30 examples of the breed still alive. It was bred for its meat but was only a medium to small breed. It has white or cream wool and both sexes are horned and have a white face.

The Syrian Jabali goat comes from the Jabali mountains of Syria. They are raised as domestic goats, are black, and both sexes are horned. The Jabali goat is a hardy animal and it has been bred primarily for its milk. Locals use the milk to drink and also to turn it into ghee and other products. The goat may also be used for meat, and it is left to natural graze for most of the year, with only limited supplementation during the cold months.

This breed of goat is bred in the Xinjiang mountains of China and they are considered a good source of cashmere wool. They are also bred for meat and milk production, which makes them multifunctional. Most of these goats are white, although you can also find black or brown examples. Both sexes are horned, and the goat is considered a hardy breed.

Yemen Mountain goats are usually black and are found in the northern Yemen mountains. The cold conditions have led to the goat breed developing a long coat of warm fur. It was raised for its fur, but also for its milk and meat production.

Mountain goats live up hills and mountains. They are adapted not only to cope with the treacherous faces of the mountains but also the intemperate weather conditions that they have to face. They will usually have longer hair because this helps protect against the cold and keeps the wind at bay. For the locals that first bred most of these goat breeds hundreds of years ago, the fleece would have proven as useful as the milk and the meat.