13 Types of Parakeets: An Overview (with Pictures) 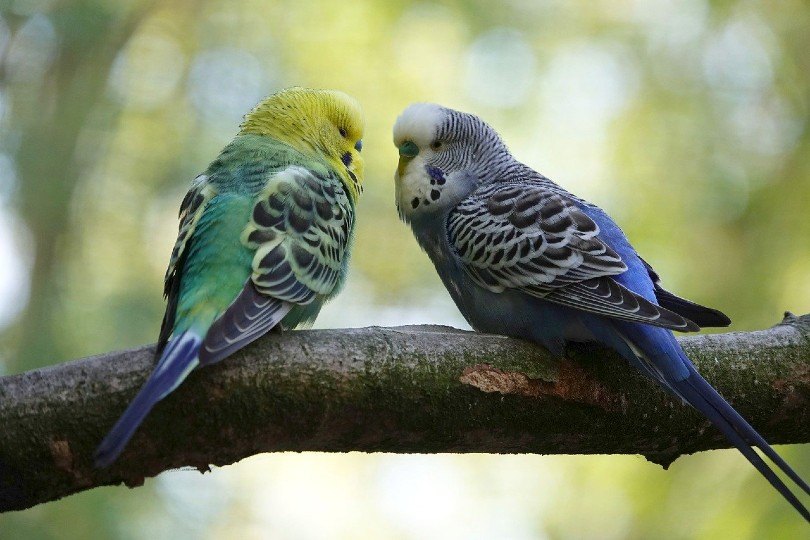 If you are in the market for a new parakeet, it’s very common to want to know what kind of options you have, and you may be surprised to find out how many kinds there are. Each type can vary quite a bit in size and color, and some and some make better pets.

We’ve searched the internet and the local pet stores to assemble the largest list of parakeet types we could, and we were able to locate 13 unique varieties. Join us while we explore each one to learn a little more about them and see how they look.

The Opaline Parakeet has reduced barring over its head and between its shoulders. It’s a little paler than other breeds the same color due to the opaline gene. It’s typically green, blue, or grey with a yellow head.

Yellow chevroned parakeets come from South America, and many people refer to them as Pocket Parrots or BeeBees. Despite their name, they often have a green body with pale green underparts. It has green and light green wings with yellow highlights and a brown or orange-brown beak. These birds are very playful and often kept as pets.

Goldenface parakeets typically have a green body like a Yellow parakeet but with a deep golden face. After the first molt, the yellow will spread lower on the body. It’s often confused with other types if the color moves too far down the body and onto the wings.

The Texas Clearbody parakeet has a light, pale color on the throat and breast that grows darker toward the legs and rump. Usually, the darkest shade is still 50% diluted compared to non-diluted birds. It usually has light black spots on the wings, often with white edges.

The English Budgie parakeet is the parent of many other types on this list. Most are from Australia, and they make a great first bird. Wild budgies are green, but captive birds are available in a wide range of colors. Budgies can talk and will learn many of the words you say and repeat them back to you. It can even repeat small sentences. English Budgies are larger than many parakeets, and you usually see them in exhibitions. They have more feathering around their face, which can make them look mad or moody.

The Scarlet Crested parakeet is a very unique looking bird. It has a hooked beak with a large head that houses an intelligent brain. It’s quite popular because of its colorful feathers, along with its ability to stay relatively quiet. It’s small, sweet, and affectionate.

Blue parakeets are friendly and have long lifespans that can reach up to 20 years. It has a blue body with white legs, a white head, blue cheeks, and a yellow beak. It’s highly intelligent and will require toys in its cage for mental stimulation.

The Anthracite parakeet or Anthracite Budgie has a solid non-diluted anthracite-colored body that is darkest on the chest. It will also have dark markings on the wings and cheeks. The face will be white and the head heavily barred.

Saddleback Budgies have a non-diluted yellow or blue color over the body that’s darkest on the chest and rump. It will have a V-shaped area on the head and shoulders with light barring and a patch of lighter coloring, often red, resembling a saddle. It’s one of the rarer types of parakeets that you probably won’t find in the local pet store.

He Plumb-headed parakeet is a unique bird from Asia that is often less aggressive than other parakeets. It usually has a green body with lighter shades of green on the chest, back, wings, and abdomen. It will have a red head with purple mixed in and a black ring around the neck.

If you are looking for your first bird, we highly recommend going with an American parakeet. It’s available in a wide range of colors, has a long-life span, is easy to maintain, and might even learn a few words for you. It’s usually inexpensive compared to the other types, and you can find them in most pet stores. Once you have gained some experience, any of the others will be great additions to your home, with the Scarlet Crested Parakeet one of the most popular.

We hope you have enjoyed reading about the different parakeet types and have learned something you didn’t already know. If you have found it useful for finding your next pet, please share these 13 types of parakeets on Facebook and Twitter.