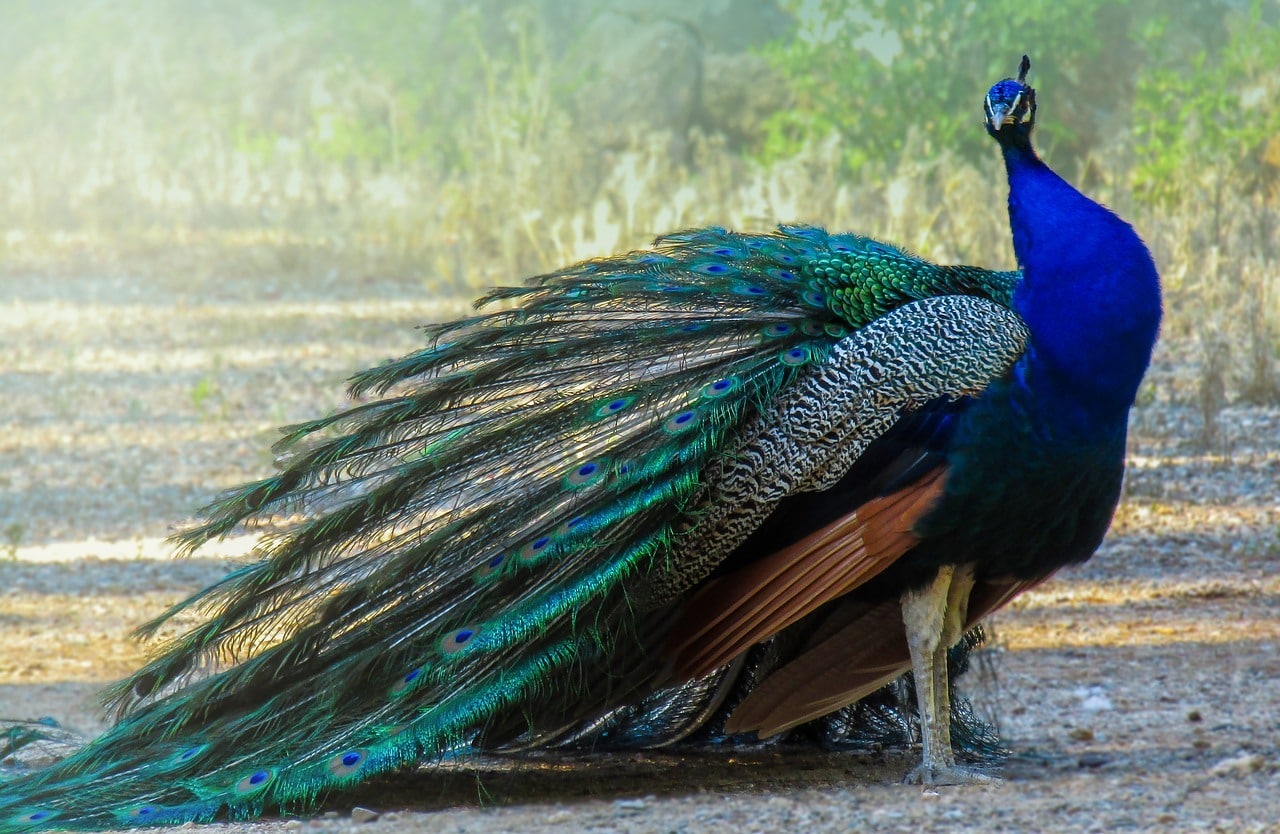 Known for their beautiful tail plumage, brightly colored heads, and unique vocalizations, peacocks are arguably one of the most strikingly beautiful birds on the planet. Peacocks are the male version of a group of birds known as “Peafowl,” and females are referred to as Peahens. Peacocks are commonly referred to as the “King of birds” and rightly so. While there is a massive variety of color combinations and sizes of Peacocks, there are only three distinct species of Peafowl. There are many different varieties of Peafowl not found in the United States, but the U.S. is leading the way in developing new color varieties. The United Peafowl Association currently recognizes 225 different Peafowl varieties.

Peafowls belong to the pheasant family, are native to Asia and Africa, and are one of the largest species of flying birds. A group of Peafowl is called an ostentation, party, bevy, or pride, and Peacocks are usually polygamous, with a harem of two or three Peahens. Peafowls are omnivorous, feeding on a diet of insects, frogs, lizards, seeds, plants, and flowers.

In this article, we take an in-depth look at three different types of Peafowl. Let’s get started!

Of the three main types of Peacocks, the Indian Peafowl is the most recognizable and popular. These birds are native to India, Sri Lanka, and other regions of Eastern Asia and are known for their incredible tail plumage and bright blue heads and crests. This amazing tail plumage and bright coloring is only found in males and is used to attract Peahens for mating.

In India, the Hindus have the perfect description of this incredible bird: “A Peacock has the feathers of an angel, the voice of the devil and the walk of a thief.” Their striking plumage is somewhat overshadowed by their loud and abrasive call, which can be overwhelming, and they definitely have a sneaky looking gait!

Also known as the Javanese Peafowl, the Green Peafowl is native to southeast Asia on the Indonesian island of Java. They are similar to Indian Peacocks in that they also have brightly colored tail feathers that they use to attract females and fan-shaped crests on their heads, but their heads and crests are green rather than blue. The green Peahens are also brightly colored with deep green, albeit not as brightly as the males, and like Indian Peafowl, the females do not have the long and striking train of tail feathers.

The Green Peafowl is the most silent of the Peafowl breeds and is a strong bird capable of extended flight despite their large size. They are also the largest of the Peafowls, and even their tail is longer than those of the iconic Indian Peacock. Unfortunately, the Green Peafowl has been listed as endangered since 2009 due to loss of habitat.

A relatively recent discovery, the Congo Peafowl does not have the impressive display of colors that the Java and Indian species are so famous for and is more pheasant-like in their appearance. That said, they do have bright blue on their upper body, and their wings have a beautiful emerald green sheen. These birds inhabit rainforests and are the only species of Peafowl native to the African continent.

Through selective breeding by Peafowl enthusiasts, there are now around 225 different Peafowl variations. Here are the most well-known varieties.

The Peahens are also strikingly beautiful and different from the Indian variety. They are typically cream colored with a green sheen, but this coloration can differ widely between females. Some have significantly darker cream and brown coloration, while others are light cream.

Developed by crossing the Indian and Java Peafowls, the Spalding Peacock is similar in color to the Java Green, but they have a thinner, longer body that is much larger than the Indian Blue. The Spalding Peahen is more brightly colored than the Indian Peahen, with far more defined green coloring around the neck and head.

Contrary to popular belief, White Peafowl are not albinos, but rather are a color mutation developed from the Indian Blue Peafowl. They are white due to a missing pigment in their genes and are not classed as albino because this lack of pigment is limited only to their feathers — they still maintain pigmentation in their eyes. These birds were the first recognized color mutation and were first found in the wild in India.