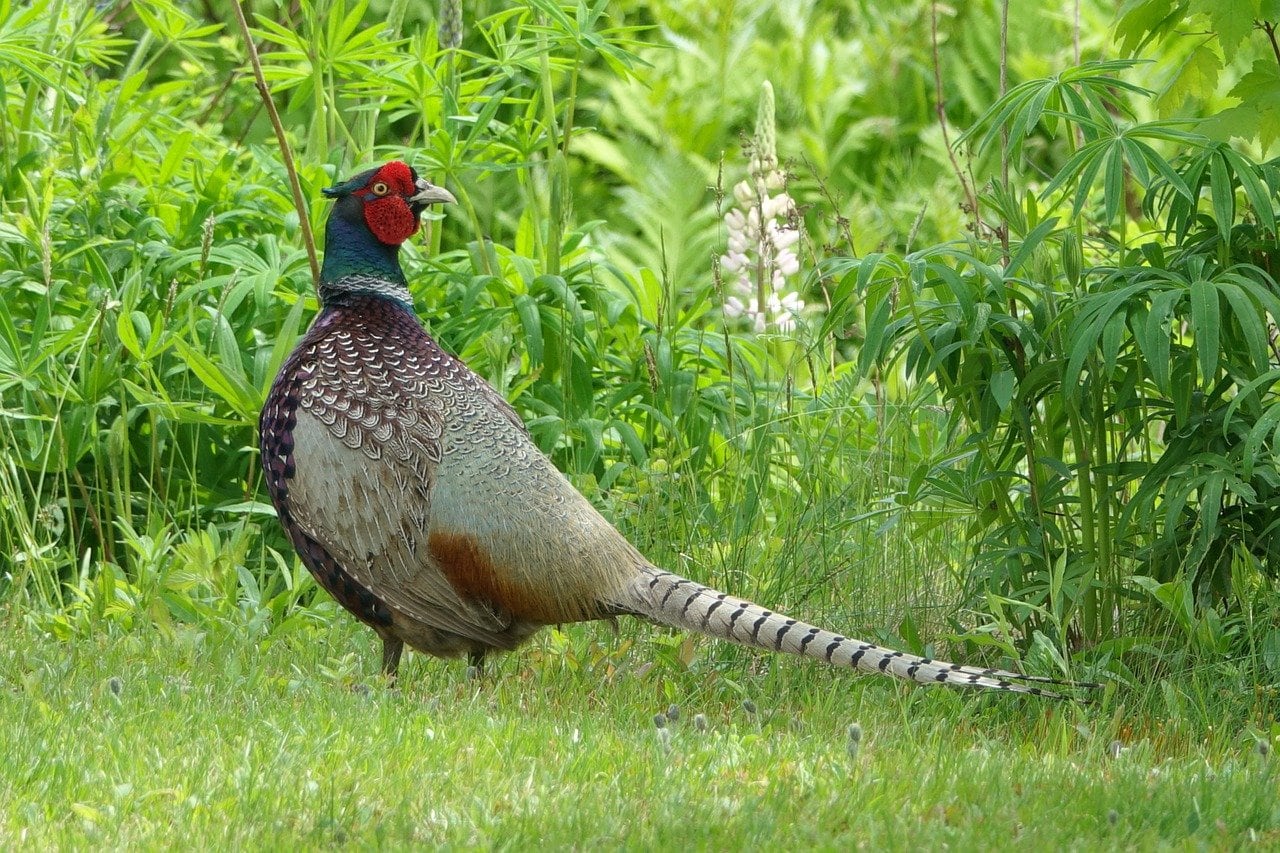 Most people look at a pheasant and think “wild bird” or “game bird.” But these native Asian birds can also make excellent pets, and most of the time are no more difficult to take care of than chickens. Pheasants are smart and their feathers are beautiful to look at.

Maybe you’re considering having a few of your own (they are social creatures, so it’s best to get more than one at a time) and you don’t know which one to pick. Check out our list of different types of pheasants to get you started, and hopefully, it will help you come to a decision.

As the name suggests, Common Pheasants, also known as Ring-Necked Pheasants, are the most commonly seen pheasants in North America. Female Common Pheasants are usually plain brown, while the male version is known for its vibrant blue/green head and white neck rings. Sometimes, the males can take on all-white or all-black colors as well.

Common Pheasants are the world’s most hunted birds. They prefer to live in fields, farmlands, and places with lots of brush. Sometimes, they also inhabit the woods and wet, marshy lands. Common pheasants only take flight when they need to, as they like to stay on the grown and to search for and eat grains, berries, insects, seeds, and small animals.

The male Golden Pheasants is one of nature’s most grand displays of art. Their feathers display bright yellow, red, black, and green colors. These birds are native to the forests in the Western and Central Chinese mountain regions, which is why they are also called Chinese Pheasants.

These pheasants eat invertebrates, grubs, grains, berries, seeds, and other types of vegetation.

As native birds to Southeast Asia (Burma, Vietnam, Cambodia, Thailand) and Southern and Eastern China, the Silver Pheasants are among the most popular types of pheasant. They can also be spotted in the Hawaiian Islands and the mainland United States. These pheasants weigh slightly more than other pheasants, making them heartier for harsh conditions.

The male version of this species differs within their subspecies, but they have plentiful white and black feathers in common, with bluish-black feathers underneath and red wattles. Females are all brownish-black with shorter tail feathers and a red outline around their eyes.

You might find a Silver Pheasant in the wild, high-altitude forests. These pheasants not only forage for seeds and plants but also insects and worms.

The second of the “ruffed pheasants” on this list, Lady Amherst’s Pheasant is another looker. This pheasant sports a similar feather pattern to the Golden Pheasant, but with parrot-like colors of reddish-orange, green, blue, yellow, white, and black. Female Lady Amhersts’ look more camouflage, with light, medium, and dark brown-patterned feathers, similar to the female Common Pheasant.

Who is Lady Amherst, you might ask? She was the wife of the General of Bengal in the early 1800s, and she’s the one responsible for bringing the species from the China/Myanmar area to London. Since then, there has been a population of these pheasants maintained in London, but they have dwindled.

Lady Amherst’s are unique in that the male pheasants sometimes help look after the young. These birds prefer dense and dark forests for their habitat.

Reeves’s Pheasant is native to Central and East China, but they have been introduced in areas such as the United States, Czech Republic, France, and the UK. The most notable thing about this pheasant is its long tail. The tail and bird together measure about 2 meters long, making it the longest tail among all birds in the world.

Male and female Reeves’s Pheasants look more similar compared to other pheasant breeds. They have colorful golden, black, and brown-patterned feathers, with the male donning a whitish-black head.

This bird is named after John Reeves, a British naturalist who brought the bird to Europe in 1831.

The last pheasant on our list is the beautiful Mikado Pheasant. It’s native to the Central Taiwan mountains and is, unofficially, the nation’s national bird and drawn onto the Taiwanese dollar. Taiwanese refer to this bird as the “king of the mist.”

The male Mikado Pheasant is dark-colored in the shade but shines blue or purple in the sunlight. They also have a white striped tail and red wattles. Females are olive-brown with a duller red wattle, and both sexes have grey legs.

This species prefers to live in bamboo growth, dense shrubs, and grassy areas with conifer trees. Mikado Pheasants are foragers of fruit, vegetation, invertebrates, leaves, and seeds, and they tend to do this on rainy or foggy days.

What Kinds of Pheasants Are There?

There are, in total, 50 species of pheasants as well as 16 subspecies. In this article, we have only covered 6 different kinds of pheasants, but consider that there are peacock-pheasants, tragopans, and monals.

How Far Can Pheasants Fly?

When they must fly, the Common Pheasant can fly from 150 feet to about a mile at most. Their flight speed is around 30 mph normally, but when they are startled into flight, they can fly up to speeds of 50 mph. However, pheasants usually prefer running over flying.

Are Pheasants Related to Pigeons or Peacocks?

Pheasants and peacocks are in the same family of birds called Phasianidae. Phasianidae also includes birds like chickens, partridges, turkeys, and grouse. The peacock and the pheasant live in different parts of the world and are different in their size and color. They are related, but they are not entirely identical. To make it even more confusing, there’s also a third related species within Phasianidae called peacock-pheasants, which are not genetically related to pheasants, but only distantly related to peacocks.

Pigeons and pheasants are not in the same scientific family. Pigeons can fly much farther and are much smaller than pheasants are. Perhaps this question arises from learning about the pheasant pigeon, a species of pigeon from New Guinea that has the same markings and colorings as a pheasant, and also the same ground-dwelling tendencies.

Whether you want pheasants for game meat, eggs, or just for visual appeal, we hope we have helped you with dipping your toe into the pheasant world. When you decide to buy one, you can probably find pheasants at your local farm store or hatchery. Keeping pheasants as pets is sure to fascinate you from day one.