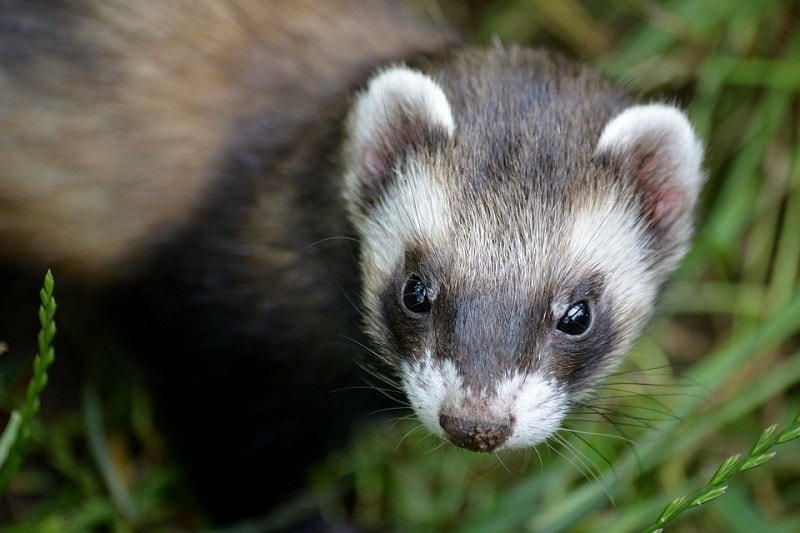 Weasels tend to get a bad rap in our society: They’re labeled as devious, untrustworthy creatures. However, that reputation ignores the incredible variance within the weasel genus, as there are quite a few creatures that fall under the weasel mantle (17, to be exact).

All that variance ensures that there will be quite a bit of difference from one animal to the next, so we’re doing them a disservice by lumping them all together (especially in such a disrespectful way).

With that in mind, we thought that it would be a good idea to take a closer look at the weasels of the world, so we can better understand — and appreciate — these maligned mammals.

What Exactly Is a Weasel, Anyway?

Before we begin, we should explore what the 17 animals on this list all have in common — the characteristics that make them weasels.

Weasels are all predatory animals with long, slender bodies and short little legs. Their lithe bodies allow them to follow their prey into burrows, and they primarily eat rodents, although they’re not picky. They can be found in many places in the world, except for Africa, Antarctica, Australia, and certain islands.

Now, without further ado, let’s meet the members of the weasel family!

The mountain weasel lives in high-altitude environments. These animals like to hide out in crevices, tree trunks, and even the burrows of animals that they’ve eaten.

They’re most commonly found in India, but their habitat ranges all over Asia, including Kazakhstan, Tibet, and the Himalaya region. They’re currently considered near-threatened, however, largely due to their environment and food supply becoming threatened as well.

The Amazon weasel is the largest weasel species in South America, as they can grow as big as 20 inches long.

Due to their preference for living deep in the Amazon, little is known about these animals, as they’ve rarely been seen or documented. However, virtually all sightings of them occurred near the river, so it’s safe to say that they enjoy spending time in the water.

The Colombian weasel is named for the region in which they’re found. However, they have another, far superior name that isn’t used as often: “Don Felipe’s weasel.”

These weasels are thought to be the rarest carnivores in South America, so even less is known about them than Amazon weasels.

These animals stick to mountains or forests in areas that are close to water, and they primarily hunt mice, frogs, insects, and crayfish.

These weasels are classified as near-threatened, but their numbers are on the uptick. This is largely due to governments in Japan and Russia introducing them to new habitats in order to keep rodent populations under control.

The long-tailed weasel may not be named after the region in which they’re found, but their tail makes up anywhere from 40-70% of their total length, and they’re well-suited for digging through snow and loose soil. These weasels can be found throughout North America and well into South America.

Besides being the most common insult used in 1940s gangster films, the yellow-bellied weasel gets their name from their dark yellow underbelly. It’s not known what, if any, purpose this serves, but it stands in stark contrast to the rest of their body, which is a much darker color.

These weasels are found in Asia, where they hunt birds, mice, voles, and other small mammals.

The Indonesian mountain weasel is limited to the islands of Java and Sumatra in Indonesia, where they live at elevations of 1,000 meters or more. Sadly, they’re currently endangered, as they’ve been targeted by fur trappers and hunters for years.

“Least weasel” is maybe the kindest name that this animal has, as the alternatives are “little weasel” or “common weasel.” As you might expect, this is one weasel that isn’t currently at risk of extinction.

These animals can be found throughout the entire Northern Hemisphere and can vary in size and color, depending on where they live. Typically, though, they’re brown with white underbellies, although they can be completely white if they live at high enough altitudes.

Found in the Malay Peninsula, as well as the islands of Borneo and Sumatra, the Malayan weasel is another species that isn’t at any risk of becoming endangered. They range in color from reddish-brown to grayish-white.

Their habitat ranges from lowland swamps to mountainous forests. Despite their large numbers, little is known about their behavior. They’re excellent at avoiding detection, though, so it’s unlikely that we’ll learn more about them anytime soon.

The Siberian weasel has a huge natural habitat ranging all over Asia, and their large numbers make them one of the healthiest species on this list in terms of population. These weasels are monochrome, usually some shade of red, although they may have pale underbellies.

They feast primarily on voles, although they won’t turn up their noses at mice or rats. They may even chew on reptiles or chipmunks if the opportunity arises, and they’ve been known to scavenge on occasion if food is scarce.

Another species native to Asia, the back-striped weasel actually has two stripes: a silvery one running from their head to the base of their tail and a yellowish one running down their chest onto their belly. The rest of the animal is a light brown shade, although they can be a bit paler on occasion.

Like the Malayan weasel, the back-striped weasel is fairly common, yet little is known about them due to their skill for avoiding detection.

There’s some dispute as to whether the Egyptian weasel is their own species at all or if they’re simply a subspecies of the least weasel. Regardless, this brown-and-white weasel is extremely common in their Egyptian homeland.

The animal is considered an “obligate synanthrope,” which means they’ve evolved to the point where they must live close to humans. They’re found on the outskirts of cities and villages, and they’ll often dig through trash to find a meal. Humans don’t often mind having them around, as they’re terrific at keeping rodent populations under control.

While technically a type of weasel, polecats have shorter, more compact bodies and more powerful jaws. They’re not as agile as their weasel counterparts, although they do have the ability to secrete a foul-smelling liquid, so there’s that.

The European polecat is either brownish-black or blackish-brown, although there are usually undertones of white or yellow in their fur. They largely subsist on voles and frogs, although they’ll eat birds if given the opportunity.

The black-footed ferret is also known as the American polecat or prairie dog hunter, and they’re found in South Dakota, Wyoming, and Arizona. The species is nearly extinct due to a reduction in the prairie dog population, as well as outbreaks of sylvatic plague among the members.

These animals have pale bodies with black feet, ears, faces, and parts of their tail. They resemble polecats more than proper weasels, although they have shorter tails and greater contrast in their fur.

The European mink is in bad shape, as they’re considered by experts to be critically endangered. Their plummeting numbers are due in large part to habitat issues related to climate change, as well as overhunting and competition with new species that were introduced into their environment in the 20th century.

They range from dark brown to reddish-brown in color and are generally monochromatic (although they sometimes have lighter-colored fur on their chest). While they used to be common throughout Europe, today, they’re mainly found in Spain, France, and parts of eastern Europe.

The steppe polecat is also known as the “masked polecat” due to their white face with dark eyes, although the rest of their body is light yellow in color. They’re found all over central and eastern Europe, and unlike the European mink, their numbers are still robust.

The same can’t be said for their prey, however. Steppe polecats are nomadic by nature, and they tend to stay in one spot until they’ve eaten everything in the area before moving on. They’re basically adorable locusts.

Stoats (also known as “ermines”) are incredibly common throughout Eurasia and North America. In fact, they tend to thrive wherever they are introduced and are considered an invasive species in places like New Zealand, where they’ve had a disastrous effect on bird populations.

Stoats generally have dark brown fur on their backs, with white underbellies. However, in some northern areas, they’re completely white, save for the black tip on their tail. They also use the skins of rodents that they kill to line their nests, so these are not animals to be trifled with (if you’re mouse-sized, anyway).

Which Weasel Is Your Favorite?

With so many different types of weasel to choose from, it can be hard to pick your favorite. Do you prefer ferrets or polecats? Stoats or minks? The possibilities are nearly endless.

While we don’t actually expect you to have a favorite type of weasel, it may still behoove you to familiarize yourself with the members of this list while you still can — sadly, this list will probably only get shorter in the years to come.