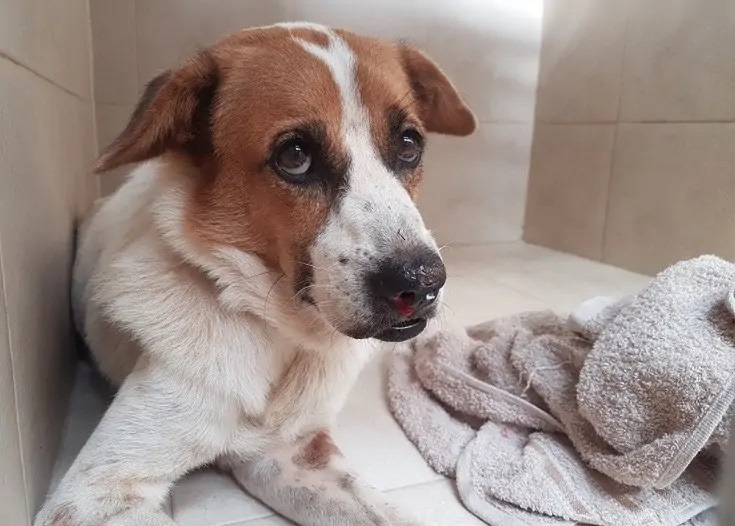 Von Willebrands disease in dogs is characterized by a deficiency in a particular protein used to help platelets stick together, which is often referred to as the von Willebrand factor. Without this protein, platelets have a hard time sticking together and forming clots, which can cause bleeding problems. Dogs with this disease often bleed excessively with minor wounds. Obviously, this can cause problems and even potentially death.

This is a genetic disease that is inherited. The exact inheritance patterns differ from breed to breed, and there are many breeds affected. All males and females carry 2 vWF genes, which code for the protein that helps platelets stick together. One abnormal gene causes slight bleeding problems, though they are typically minor. Those with two abnormal genes usually have the most problems.

It is important for breeders to screen for this genetic condition to ensure that no severely affected puppies are produced. In some breeds, there is such a large portion of the breed that is affected that it is difficult to avoid this disease altogether. However, by not breeding together two dogs that are affected, you can prevent the puppy from having severe disease.

Dogs that test in the normal range for this protein are ideal for breeding programs and often used in most breedings. However, it can be difficult to determine which dogs are affected by this disease very minorly and which aren’t affected at all. Therefore, the produced puppies should be watched to ensure that the original tests for the parents we accurate.

Over time, producing unaffected puppies will result in eliminating the disease from bloodlines. This takes quite a bit of work and testing by breeders. However, it is necessary to eliminate this sadly very common disease.

There are a few types of this disease. While they all affect the dog in similar ways and have the exact same symptoms, the severity largely depends on what form of the disease your dog has.

The symptoms of this disease involve the dog being unable to clot properly. Often, this shows itself in a variety of ways. Dogs aren’t always diagnosed right away, especially if they haven’t been involved with anything that would cause trauma. Sometimes, these dogs aren’t diagnosed until they need surgery, at which point the vet notices their inability to clot properly.

The symptoms can be mild or severe. Sometimes, they can result in death if the dog is not treated quickly. A dog may also carry the trait without actually showing any bleeding problems, though they may show up later. (This is one reason breeding can be difficult. One parent can test completely fine while still carrying this disease.)

Dogs with severe versions of this disease may randomly bleed from the mouth, nose, urinary tract, and digestive tract. Uncontrolled bleeding may also happen after and during surgery. Simple things like teething and dewclaw removal can cause severe bleeding.

Infections may cause bleeding to get worse, as well as certain medications and disorders. It is important to get these things checked promptly to ensure that the problem isn’t exacerbated.

Sometimes the dogs bleed or bruise excessively after routine surgery, like spaying or neutering. Symptoms may only be noticed after one of these surgeries.

This disease can be diagnosed through a blood test that measures the amount of von Willebrand factor in the blood. If it is low, then the dog likely has this genetic disorder.

This test can be a bit expensive, however. For this reason, vets will often perform a buccal mucosal screening first in their office. If the dog bleeds excessively during this test, it is possible that they have the disorder, and the vet will likely suggest further testing.

If the symptoms were first noticed during surgery or trauma, the vet might skip this testing, as it may be obvious that the dog has vWD.

Even if the dog has undergone simple procedures and recovered fine, it doesn’t necessarily mean that they don’t have this disorder. Some dogs don’t show symptoms until they are much older. Therefore, even if they test negative, it doesn’t necessarily mean they don’t have this genetic condition. This can make breeding particularly complicated since dogs with no symptoms may actually carry one of the genes.

Some vets recommend screenings for breeds that have a high occurrence of this disease. However, others do not recommend it, as it isn’t necessarily accurate.

Like we previously discussed, dogs may not show symptoms until later. With that said, it can be important to identify dogs that carry this condition before having surgery.

If a dog is experiencing an emergency, a blood transfusion is often recommended. Fresh frozen plasma may also be used to stabilize a bleeding dog. Sometimes, a donating dog may be treated with a drug that is designed to increase the van Willebrand factor in dogs. These medications may also be used on dogs with this disease as well. However, the results vary.

Long-term use of this medication is not recommended, as there have not been any studies on its long-term use and side effects. Furthermore, the medication is expensive. Your vet will discuss possible treatment options and may suggest these medications if there are few other options.

This serious clotting disorder is manageable, but it can be serious if not treated promptly. This disorder can be both minor and extremely serious, depending on how the dog is affected. It is extremely common. In fact, it is one of the most common genetic diseases in dogs.

This disorder causes excess bleeding. This can obviously be a problem for dogs when they become injured or have to undergo surgery. There is no treatment, but it can be managed.

For more articles on conditions your dog may experience, see: