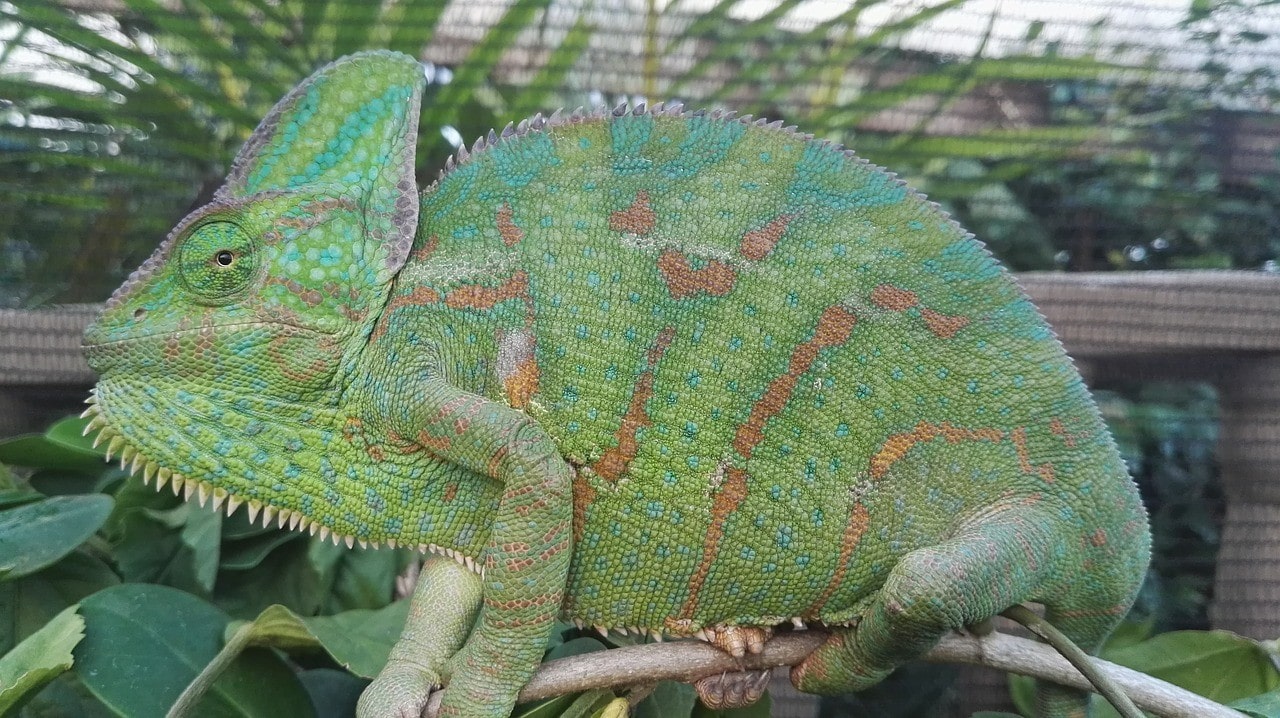 Also known as the Yemen chameleon, the veiled chameleon is among the larger species of chameleons and is predominantly found in the Yemen and Saudi Arabia regions of the Middle East.

While one might assume that it is a desert animal due to the place that it originates from, the veiled chameleon lives in the coastal mountain slopes, which are regions that receive significant rainfall.

The veiled chameleon has earned a misplaced reputation for being a bad or unfriendly pet. For a long time, most of the veiled chameleons being sold as pets were wild caught, which means that they did poorly in captivity. However, thanks to selective breeding, most veiled chameleons on the market today do well under proper conditions.

The price of this animal ranges between $40 and $250, depending on factors such as lineage, morph, and age of the chameleon.

Veiled Chameleons – Before You Buy…

As mentioned, this is one of the larger chameleon species and can grow up to 24 inches long. They get their name from the triangular casques on their heads. These casques, or “veils,” keep growing well into adulthood, with some animals spotting casques as long as 2 inches.

Scientists believe that veiled chameleons developed their casques to help them direct water falling on their heads into their mouths.

Young veiled chameleons are light green and eventually develop the ability to change colors as they age. Adults spot a wide variety of colors, with brighter colors being an indicator of happiness or dominance.

The following are a few facts that you may or may not know about veiled chameleons:

A common misconception about chameleons is that they change colors as a form of camouflage. Scientists have long debunked that myth. The reality is that chameleons change color as a means of expressing their emotions, with happy and content ones sporting bright colors and anxious ones sporting darker colors.

The color that a chameleon is sporting might also say something about its social status, as most dominant males typically wear brighter colors.

A chameleon’s tongue is perhaps its most well-known feature. It is long and sticky and has a cup-like protrusion that acts like suction. Additionally, it can be up to twice the length of the chameleon’s body, which explains why these animals are so efficient at capturing prey.

Just like other chameleon species, the veiled chameleon also spends most of its time in treetops. That is what is referred to as an arboreal lifestyle, and it helps them capture prey, as well as protect them from being easy prey to the predators on the ground.

To lead an arboreal lifestyle, the veiled chameleon has opposable toes that help it keep a firmer grip on surfaces. It also utilizes its tail to grip surfaces around them to prevent falls.

Things to Know When Owning a Veiled Chameleon:

Chameleons are renowned insectivores. Veiled chameleons, however, are omnivorous, as they also feed on plants. It is believed that they eat plants for their water content since chameleons do not drink directly from water sources.

Veiled chameleons can thrive on a diet of insects, especially crickets. Juveniles typically require more feeding than adults. Consider feeding juveniles at least once a day, while feeding adults every other day.

Be sure to supplement their diet with calcium and vitamins for optimal growth and development.

Veiled chameleons are solitary animals, with males being especially territorial. As such, these reptiles do not play well with others. Dominant males, as mentioned, assert themselves by displaying bright colors. Female veiled chameleons choose such males as mates.

Even when they have not mated, females still produce eggs, albeit infertile ones. This takes a toll on their bodies, which causes them to wear out at a faster rate than males.

If you are looking to keep a veiled chameleon as a pet, ensure that you take heed of the following.

As mentioned, veiled chameleons are solitary by nature and as such, are best kept individually, especially after reaching sexual maturity at around eight months of age.

The ideal enclosure for a veiled chameleon should have screen sides, as they allow for better airflow. Glass-sided habitats have poor airflow, which results in stagnant air that can cause the animal to develop respiratory issues.

Adult veiled chameleons do well in larger enclosures, measuring at least 2 x 2 x 4 feet. Juveniles can make do with smaller cages; however, you will need to transfer them to a larger habitat once they hit sexual maturity.

The enclosure of a veiled chameleon should feature vines and foliage for the animal to hide in. However, ensure that the plants that you choose are not toxic to the chameleon. Consider going for plants such as hibiscus, ficus, pothos, and Schefflera.

You need to have two types of bulbs inside a veiled chameleon’s enclosure: one for providing heat and the other for emitting UVB rays.

Just as it is the case with other reptiles, veiled chameleons are cold-blooded, which means that they are inefficient at regulating their internal body temperature. This is why you must have a heat source in the enclosure where the animal can bask when it is feeling cold.

Since you will likely have the enclosure inside the house, your pet will not be receiving UVB radiation from the sun’s rays. UVB radiation is essential for ensuring proper calcium absorption, thus helping prevent conditions such as metabolic bone disease.

You will need to maintain optimal humidity levels inside a veiled chameleon’s enclosure, as it is not only crucial for their comfort but also for hydration. Chameleons do not drink water off bowls; instead, they lick leaves and other surfaces that have water droplets.

This means that you will need to purchase a misting system to keep the enclosure humid, so as to meet the chameleon’s needs.

Veiled chameleons are of the few species of chameleons that can do well under captivity. Nonetheless, you must ensure that their needs are met, as they can be especially sensitive.

Hopefully, you have learned a bit about this animal and what it needs to thrive. If you have any questions regarding veiled chameleons, be sure to let us know.

For more about Chameleon breeds, check out these posts: