7 Most Vocal Cat Breeds (with Pictures) 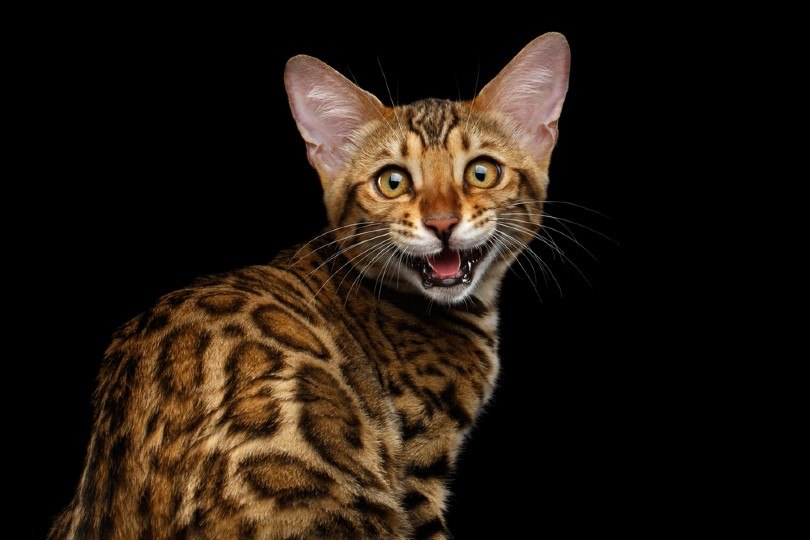 Some cats hardly make a peep, while others yell almost constantly. Chatty cats purr, meow, chirp, and make all sorts of noises. They may chat specifically with you. Or, they may talk all the time.

Whether you’re looking for a vocal cat breed (or not), this article will inform you of the noisiest cat breeds out there, allowing you to make a suitable decision for your preferences. Some of these cats are relatively common, like the Siamese. Others are rarer, however.

The American Bobtail cat breed is rarer than some others, but they are common enough to locate breeders with some ease. They are social and easygoing, which drives their chattiness. They will meow and ask for attention. They get along with children and most other pets (besides prey animals, of course).

These cats are often described as “dog-like.” They are considered intelligent and can learn tricks. Many will even play fetch and walk on a leash.

Their coat can come in various colors, including black, brown, fawn, and blue. They are considered a moderate shedding breed. Their coat will require brushing a few times a week.

These cats are a strong and healthy breed. They don’t have any genetic dispositions. Occasionally, they can have spinal problems due to their shortened tail.

In the states, these cats are relatively rare. They are fun-loving cats that are quite active. They are very close with their people and love to meow for attention, exactly why they are noisy. They are intelligent, but they do require a lot of attention. They are extroverts.

They are known for their distinctive tail plume. They are slender cats, but they are also quite muscular. They look similar to a Siamese, with blue eyes and large ears. They are moderate shedders, as they have no undercoat. Weekly brushing is all that’s required.

They are a healthy breed, though they do have some problems with feline acromelanism, which causes their coat to change colors. This condition is not terribly serious, though. They may also develop Progressive Retinal Atrophy, which can be potentially serious and cause blindness.

These cats are quite athletic, though they don’t look bulky. Typically, they have dark markings around their eyes and smaller ears. Their fur is quite plushy. They have one of the most unique patterns of any cat. Their coats are highly contrasting shades of orange and light brown, with marbling patterns throughout.

These are very low-maintenance cats and don’t shed incredibly much. They are also very good at self-grooming.

These cats are not the healthiest. They are prone to distal neuropathy and flat-chested kitten syndrome. They may also develop hip problems, cardiomyopathy, and progressive retinal atrophy.

Known for being energetic and playful, these cats love playtime. They thrive with interactive toys. They also tend to be particularly fond of their people, where most of their vocalizations happen. Many people describe them as having a dog-like nature.

They are strong and muscular, though also compact. These cats come in a variety of colors today, though the first one was sable. Typically, kittens darken as they mature.

Burmese cats are particularly prone to gingivitis and may be sensitive to anesthesia. They aren’t the healthiest cats, so they are also prone to various other diseases, including corneal dermoid, kinked tail, and diabetes.

Oriental cats are incredibly sleek. They have short, glossy coats, though longhaired versions have semi-long coats. Their ears are enormous for their head. Usually, their coats range from solids to tabbies to silvers. They come in a wide variety of colors.

This shorthaired cat requires minimal shedding. They need only occasional brushing and do a good job at keeping their selves clean. They do not have a wooly undercoat, which helps reduce their shedding considerably.

They are members of the Siamese family, which puts them at risk for a variety of defects. They are prone to inherited neurological defects that may cause crossed eyes, dilated cardiomyopathy, and liver amyloidosis.

Known as one of the most vocal cat breeds out there, Siamese cats are well known for their social nature. They talk to practically anyone and are pretty loud. They are companion animals, thriving on companionship and social relationships. They are highly intelligent. They love puzzle feeders and can even learn a few different tricks.

Siamese cats have a long physique. Their legs and tails are extremely long. Usually, they have deep blue eyes that are almond-shape. Their point coloring can range from brown to chocolate. They can also come in other patterns, including tabby. They don’t shed much, mainly because of their short coat.

Due to their head shape, these cats are prone to various periodontal diseases and respiratory illnesses. They may also develop some physical deformities. Visual problems are also common, as well as heart and bladder issues.

Sphynx cat breeds are lively and loveable. They like attention and are very vocal about their needs. They are lap cats and enjoy talking to their companions. These felines are incredibly playful and entertaining. They are hairless, which makes them decently low-maintenance. They have wrinkled skin and huge ears, which make them quite cute.

They come in all sorts of colors, including white, blue, red, chocolate, lavender, and fawn. While these cats don’t shed, they do require regular baths to remove the oils from their skin. If you start early, most learn to love their baths.

They are at a higher risk for hypertrophic cardiomyopathy, which is deadly heart disease.