What Animals Attack Rabbits? Be Aware of These Predators! 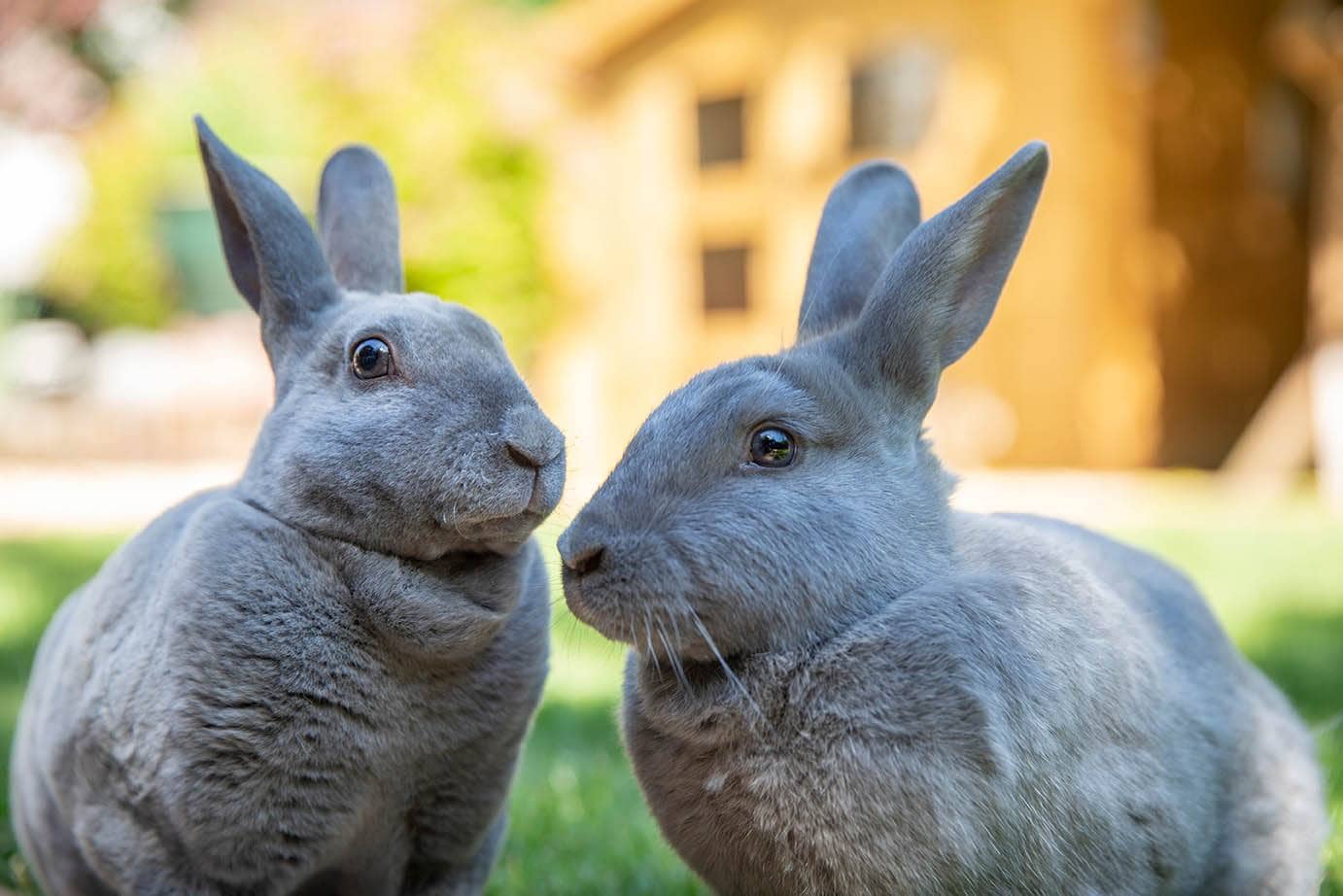 Besides being cute, rabbits breed very fast thanks to their short 28-days gestation period. Interestingly, a female bunny can produce between four to seven babies at ago.

Despite rabbits’ ability to multiply rapidly, mother nature dooms the population of rabbits with predators’ help.

Because a rabbit’s primary defense is to run and hide as quickly as possible, it makes them vulnerable to large, more robust, and faster predators. What are examples of these predators? Keep reading to find out.

What Type of Animals Eat Rabbits?

Foxes would love to eat nothing more than a tasty rabbit for food. Although foxes don’t need bunnies for their survival, rabbits are among their major food sources and can make a significant and primary part of their meal if available.

Wolves are among a rabbit’s greatest threat, mainly because they eat them for pleasure. Wolves are carnivorous and primarily prefer large and small ungulates. However, they eat rabbits to supplement their primary food sources and only eat bunnies as their staple food during food shortages.

Dingoes are more like wild dogs that mainly thrive in grasslands, the woods, and rocky terrains-places that rabbits also reside. They eat rabbits as their primary food source, mainly because they can find them in abundance.

Wolverines are omnivorous mammals that look like small bears. They usually eat almost anything, including rabbits.

These mammals are known to dig into burrows of hibernating animals and eat them during winter when there’s a food shortage. Therefore, rabbits can be a wolverine’s leading source of food if they have fewer food options.

Coyotes are not so picky with food because they are both scavengers and hunters. They can also eat vegetables because they are omnivorous. However, a coyote’s favorite meal would be a tasty small mammal like a rabbit, rat, mote, or a vole.

Raccoons are omnivorous and can eat veggies and animals such as rabbits if they can catch them. However, bunnies don’t make the most of a raccoon’s diet because raccoons are slow and prefer slow-moving creatures.

A bear’s diet ranges from honey to ants, rabbits, deer—or even humans! Bears feed depending on the season and availability and can eat even veggies if the meat is unavailable. However, they prefer meat more and can eat rabbits when available.

Although birds of prey may not be much of a problem in urban areas, they can attack and eat rabbits, especially if they are on free-range.

Birds such as eagles, hawks, falcons, owls, and crows are always on the lookout to snatch away and eat small mammals like rabbits, squirrels, and mice.

Snakes can eat pretty much anything that moves, depending on their sizes. Medium-sized snakes like cobra, mamba, and viper can eat smaller-sized rabbits, while large snakes like anacondas, pythons, and boas can quickly engulf larger rabbits as a whole.

Domesticated dogs can attack and eat a bunny at any time, depending on their nature and upbringing. Plus, there are some domesticated dog breeds developed specifically to chase and kill animals like rabbits. They include Jack Russel Terriers, Beagles, Basset Hounds, Redbone Coonhounds, Fox Terriers, and Weimaraner.

Big cats such as leopards, bobcats, and cougars are mainly carnivorous and pose a threat to any prey, including rabbits. These animals do not usually need rabbits for survival and may kill and eat bunnies after having enormous game meat.

Domesticated cats also have predatory instincts and can kill and eat a rabbit. While bunnies can defend themselves to some extend (by running or kicking), they can’t survive catfights from large kitties.

Young and small rabbit breeds are most at risk because of their tempting “mouse-like” appearance.

A lizard’s diet mainly depends on its size, and large lizards like Iguanas and Komodo dragons eat animals of various sizes, from toads, rabbits to deer.

Some medium-sized lizards, such as the Monitor lizard, also eat animals like rabbits as their primary food source.

Ferrets are small mammals that are pure carnivores. They are also nocturnal, with a pretty good night sight, putting them in the rabbit’s way. This means that ferrets usually have rabbits as their primary source of food.

However, ferrets also eat other small mammals like rats, possums, and hedgehogs. These carnivores have a high metabolism and small intestines that allow them to eat every part of an animal, including bones.

Despite weasels’ small sizes, these animals are strong and thrive in pack hunts, making it easy for them to eat similar size rabbits. They also have a high metabolic rate, a big appetite, and eat their prey by crushing them from the neck region.

Most of a badger’s meal consists of small insects and worms. However, they can also hunt and eat small mammals like bunnies and rodents like rats.

Stoats also prey on rabbits by tricking them. They hunt in packs and use the diversion technique such that one stoat distracts the rabbit while the rest of the pack pounds on the prey.

Of course, a human poses the greatest threat to rabbits. Humans hunt rabbits in the wilderness for meat and have been doing so for ages.

Due to the demand for rabbit meat, rabbit farms worldwide are raising rabbits to fulfill the need. Humans not only hunt rabbits for their meat but also their coats.

What Animals Would Kill A Rabbit but Not Eat It?

Possums may attack and kill a rabbit but not eat it because they are mainly scavengers. Possums eat dead animal’s carcasses after other predators have already killed and eaten most part.

These animals may attack and harm a bunny if they feel threatened.

Raccoons are omnivorous animals that eat vegetables and also scavenge animal species. As scavengers, a raccoon can attack and kill a rabbit to harm it but not eat as raccoons only eat what’s already dead.

Besides being prey, housecats are also predatory species that may hunt and kill rabbits without eating them as normal predatory behavior. However, housecats shouldn’t eat bunnies as these animals harbor diseases that they could spread to them.

How to Protect Your Rabbits from Predators

The best way to make your bunnies out of a predator’s reach is by keeping them indoors. The good thing is, domesticated rabbits can do just fine living in your house, as long as they have access to food, playing toys, and enough space to run, jump and play.

Housing your bunnies shouldn’t be inconvenienced because you can potty-train and rabbit-proof a room to prevent them from escaping.

Since you’ll not always be around to protect your bunnies every time, buying a rugged rabbit cage or hutch isn’t enough. Plus, if you plan on keeping your bunnies outdoors, the hutches from the stores may not be sturdy enough or suitable for the outside.

It’ll be best to construct the shelter yourself and predator-proof it by strengthening the wires to prevent stronger predators from easily destroying the cage.

Also, reinforce the locks and make them sturdier. Some predators can be smart enough to discover that they can unlock to gain access.

You can also place the shelter on an impenetrable or concrete floor to prevent the predators from digging and sneaking underneath. Better still, reinforce the surface with wood to make the hutch impenetrable.

Putting all the other measures in place may not be enough if the predators can still hover around your yard. Unfortunately, a bunny can die from shock by seeing the predator, even if it’s already safe in a hutch.

Therefore, make your yard inhabitable for predators by keeping it clean, avoiding scrap foods, and getting rid of standing water to deny predators access to food and water.

Better still, bar nocturnal creatures like ferrets and foxes by installing motion-sensing lights around the yard.

Supervise your rabbits during their playtime or if you plan to free-range them. Predators like birds of prey and foxes are usually afraid of people and may not approach your bunnies if you are around. It would also be best to check on your rabbits now and then in an outdoor enclosure.

If you are considering keeping rabbits, you’ll need to take some measures to protect your bunny from predators. You can avoid free-ranging and provide secure shelters such as hutches for your rabbits.

Ensure that the rabbit’s shelter is out of a predator’s reach because, unfortunately, bunnies can freeze and die from shock just by coming into contact with a predator!