What Do Chipmunks Eat in the Wild and as Pets? 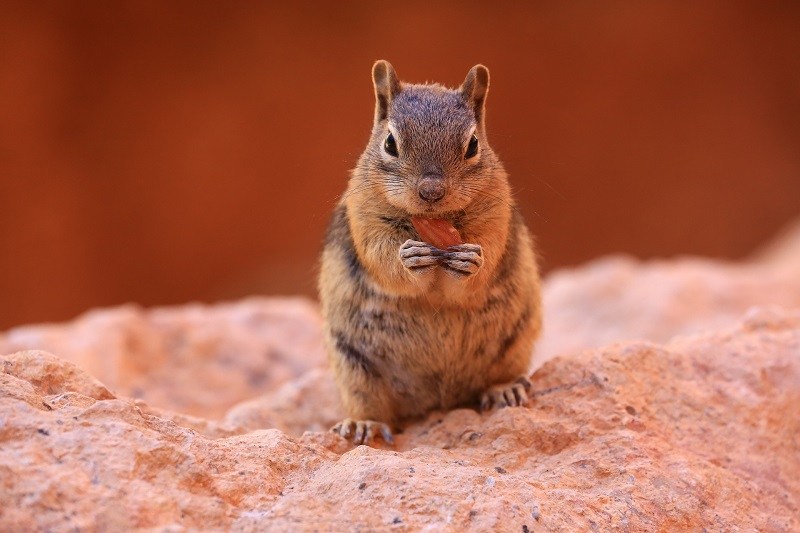 While they’re technically rodents, there are few animals in this world as adorable as chipmunks. It’s no surprise, then, that so many people would want to keep these furry little creatures as pets.

However, many people have little idea what chipmunks actually eat, and as it turns out, being able to feed an animal is a big part of keeping it as a pet. Most people think they merely eat acorns, but that’s far from the only food in their diets.

Below, we’ll take a look at what chipmunks eat when left to their own devices, as well as what you should expect to feed them when they rely on you for meals. Even though there are 25 different chipmunk species, they’re very similar in terms of diet, so the information below should apply to most any chipmunk you can bring home.

What Do Chipmunks Eat in the Wild?

You may not realize it, but chipmunks are omnivores. They’ll snack on both meat and plants when given the chance, and both food sources are vital for their health.

Chipmunks in the wild are very opportunistic eaters, and they’ll feast on just about anything they come across. In terms of plants, this includes seeds, fruits, grains, mushrooms, grass, shoots, and of course, nuts.

They’re not very picky when it comes to meat, either. Chipmunks will snack on frogs, insects, worms, bird eggs, baby birds, millipedes, centipedes, and sometimes even snakes!

Basically, if it’s small and close enough, a chipmunk will eat it.

What Do Chipmunks Eat When Kept as Pets?

If you’re planning on keeping a chipmunk as a pet, there’s one thing we can tell you with full confidence: don’t feed them any snakes.

A chipmunk that’s kept as a pet will have one big advantage over their wild counterparts, and that’s the availability of pre-packaged food. There are cereals and bars that are specially made for chipmunks and other rodents, and you can find them at most pet stores. These should give your pet a good variety of healthy foods to munch on, and they should make up at least 50% of your chipmunk’s diet.

You can also offer them a variety of nuts, including sunflower seeds, but these should be given sparingly. They can be full of fat, and you don’t want your rodent to become overweight.

They enjoy fruits and veggies as well. They particularly enjoy berries, leafy green vegetables, apples, pears, bananas, and bean sprouts. Just be sure to wash them thoroughly, as if there are any pesticides or insecticides on the food, it could be fatal for your pet.

Your chipmunk will need protein, too. You can get mealworms at the pet store, or you can cook some meat or eggs to offer them. Some chipmunks will also eat dog or cat food, both of which are likely to be loaded with protein.

How to Feed a Chipmunk

Chipmunks are crepuscular, meaning they’re most active at dawn and dusk. You should try to offer them food around these times, as that’s when they’ll be most interested in eating.

However, they spend most of their waking hours searching for food, so if you oversleep, you don’t have to worry that you missed the feeding window. They’ll spend a fair amount of time hiding food for later, so you should keep a few places in their habitat where they can store snacks.

Chipmunks in the wild are vulnerable to all sorts of predators, so they don’t like to spend much time out in the open. They prefer to eat in their burrows or other secure locations, so you should provide some sort of shelter they can use when it’s mealtime.

Their eating habits will change depending on the season as well. While chipmunks don’t hibernate, their metabolism slows down during the wintertime. That means they’re likely to be more active in the fall while also storing as much food as they can. In the winter, though, they’ll spend more time sleeping than eating.

Like many rodents, chipmunks have teeth that grow constantly. They need to file those teeth down, or else they could be vulnerable to a variety of painful dental conditions. That means that, in addition to food, you should provide them with pieces of hard wood or bone that they can use to file down their chompers.

What Will You Feed Your Chipmunk?

While chipmunks aren’t the most traditional of pets, they’re growing in popularity, as they can be both adorable and friendly when raised in captivity. Before you bring one home, though, be sure that you know what to feed it because while chipmunks aren’t picky, there are certain things that are better for them to eat than others.

As long as you provide them with a healthy amount of variety, though, they should be fine. Most importantly, though, keep those snakes out of their habitat.