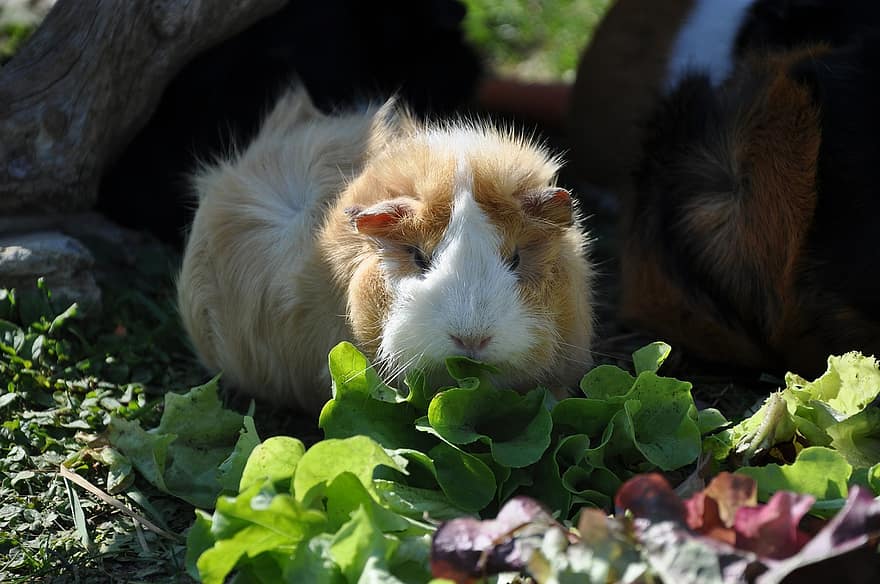 There comes a time in every parent’s life when their child asks them the inevitable question: “Can I have a guinea pig?”

Giving in may seem like the easy way out — after all, guinea pigs are fairly cheap and low-maintenance pets, all things considered. That’s until you get one home and realize something: You have no idea what they eat.

Fortunately, guinea pigs don’t have a particularly exotic diet, and you can easily find their food at your local pet store. That doesn’t mean you don’t have choices, however, and in this guide, we’ll walk you through exactly what you should feed these furry little cuties and why.

The Guinea Pig Diet: An Overview

Guinea pigs are herbivores, so you can put back that filet mignon. They just want to munch on the juiciest, most succulent plants they can find.

However, there’s more to it than just giving them fresh foliage every day. There are two main requirements that guinea pig food must satisfy: it must be fibrous and it must have plenty of vitamin C.

It needs to be tough and fibrous because guinea pig teeth never stop growing. As a result, they need something that will wear their little chompers down over time, because overgrown teeth can rip into their gums and cause abscesses.

Most mammals can manufacture their own vitamin C, but not guinea pigs. As a result, they’ll need to get plenty from their food. If your pet doesn’t get enough, it could suffer from scurvy — just like an old-timey pirate. If the food you give your furry pal doesn’t have enough vitamin C, you’ll need to give them a supplement.

Be Careful When Starting Them Off

While you may feel that variety is the spice of life, your guinea pig is unlikely to agree. They generally prefer whatever food they ate when they were younger and will become resistant to change later in life. That’s why it’s important to be sure you can continue to get your hands on whatever their preferred foodstuff is.

If you do need to change their diet, you have to do so gradually, the same way you’d change a dog to a new kibble. That means adding a tiny bit of new food to the old stuff, then over a period of weeks, adding more and more until you’re feeding them the new food exclusively.

If you try to change their diet too quickly, they’ll likely suffer from digestive issues — if they even eat the new food at all.

Anyone adopting a new guinea pig should ask about its existing diet, especially if it’s an adult. You can’t just feed it the first thing you see at the store and expect good things to happen.

Hay is extremely important for guinea pigs, and you should include it in their diet even if you give them other foods as well. Hay is extremely fibrous, so it does an excellent job of filing their teeth down while they munch.

It’s also full of fiber, which is important for their digestive health. While feeding them something that makes them poop more may seem like a bad idea, you’ll have to trust us when we say that it’s better than the alternative.

You can’t just give them any hay, however. Three primary types of hay are suitable for guinea pigs: Timothy, orchard, and oat. Timothy is by far the most common and probably the best.

You may see alfalfa hay offered; if so, avoid it. Alfalfa hay is a legume rather than a grass, and it has more calcium and calories than your guinea pig needs. You may be able to offer it as an occasional treat, or it may prove useful if your guinea pig is pregnant or suffering from certain diseases.

The most important thing to keep in mind when feeding your guinea pig hay is to make sure there’s no mold on it. Store it in a cool, dry place, and replace the batch daily. You may need to replace it more often than that if it gets wet.

You’ll find guinea pig pellets in just about any pet food store. They’re usually made with Timothy hay with other ingredients thrown in. Just be careful that it doesn’t have any seeds, dried fruit, or dyes and additives.

If you’re going the pellet route, look for one that’s fortified with vitamin C. However, vitamin C degrades quickly, so don’t assume your guinea pig will get the necessary amount from the pellets alone. You’ll likely need to supplement with fresh fruits and veggies.

A good reason to offer plain pellets rather than ones with fruits or seeds is that guinea pigs can be picky eaters. If there are bits that are particularly scrumptious mixed in with the plain pellets, your pig may just skip over the boring, nutritious parts and only eat the good stuff.

Feed your guinea pig according to the recommendations from the pellet manufacturer. You’ll want to offer them the pellets twice a day but pick them up after about an hour, as guinea pigs will gladly eat themselves into obesity if given the opportunity.

Just as a reminder, feeding your guinea pig pellets doesn’t mean you can stop giving them hay. They still need the grassy stuff, so expect to buy both.

Guinea pigs need about a cup of fresh vegetables per day. The bulk of these should come in the form of leafy greens like kale, romaine lettuce, cilantro, and parsley.

You can also give them veggies like bell peppers, tomatoes, and broccoli every day, as these are chock-full of vitamin C. Foods like carrots, sweet potatoes, and zucchini are also good but should be given more sparingly — once or twice a week should be plenty.

Be sure to wash the veggies before serving them, as you don’t want your guinea pig to eat anything with pesticide residue on it. Also, they prefer their salads at room temperature, so leave their veggies out of the fridge.

Not all veggies are okay, though. Here’s a partial list of veggies you should never give your guinea pig:

Guinea pigs will go bananas for fresh fruit, but they should be given in moderation, as they’re full of sugar. Too much fruit can easily lead to an obese pet, so limit their fruit intake to 10% of their diet or less.

Fruits are a great way to add more vitamin C to your pet’s diet. Citruses are perfect for this, as are foods like kiwis, strawberries, and blueberries.

Be careful about introducing new fruits into your guinea pig’s menu, though. Fruit is more likely to cause an upset stomach than some of the other foods on this list, so work it into their diet slowly.

Whatever you do, don’t give your guinea pig raisins, grapes, coconut, or avocado, as these are all toxic. Also, pick up any uneaten fruit after 24 hours, because eating old stuff can make them sick too.

When shopping for your new pet, you’ll undoubtedly run across treats that are made specifically for guinea pigs. There’s nothing wrong with giving these to your little fuzzball every now and then — provided that you pick a good one.

Many are loaded with ingredients like sugar, high fructose corn syrup, fat, and sugar. These ingredients are all bad for guinea pigs, as they contribute to obesity.

Instead, look for one that’s primarily made of Timothy hay, with a little fresh fruit thrown in. The shape is important too — a round treat will encourage foraging, which is good for your pet’s physical and mental health.

Of course, you don’t have to spend money on treats at all. The occasional bit of fresh fruit is all these animals need to feel pampered and loved.

We wanted to be comprehensive with this list, so we’d be remiss not include this gross option. But let us be clear: We’re talking about guinea pigs eating their own poop. You shouldn’t provide them with foreign feces.

However, eating their own waste is extremely common in guinea pigs, and it’s actually fairly healthy, as it maximizes the amount of nutrients that the animals get from their food.

There are two kinds of guinea pig poop: the dark, hard pellets and soft, squishy bits called “caecals.” Guinea pigs will usually only eat their own caecals, as they’re full of undigested plant matter. Eating them allows them the opportunity to re-absorb all the vitamins and minerals they missed the first time.

You may never actually see caecals around your guinea pig’s cage; that’s because they often eat them straight from the source. That’s just a fun fact to keep in mind the next time you’re tempted to give your guinea pig a little kiss.

Mineral wheels are another thing you might see offered in your local pet store. These are billed as a great outlet for gnawing, so you may be tempted to throw one in your cart.

That shouldn’t be necessary. If you’re feeding your guinea pig enough hay, they’ll have all the opportunity to gnaw as they need, so these accessories are superfluous at best.

Also, some of them are held together with glue or other adhesives, which isn’t something you want your guinea pig ingesting. Many are also bleached, adding a bunch of other chemicals into their diet.

While mineral wheels shouldn’t be too dangerous for your guinea pig, they’re most likely a waste of money, so there’s no sense taking the chance.

Feeding a Guinea Pig Is Easy

While you may be a newcomer to the world of guinea pig cuisine, it shouldn’t take long for you to become an old pro. These animals are perfectly happy eating the same thing every day, so you shouldn’t need to enroll in culinary school to keep them fed.

As long as you make sure they have plenty of vitamin C and their teeth aren’t too long, you can’t mess this up too badly. Also, buying all those fresh fruits and veggies may even encourage you to improve your own diet along the way.