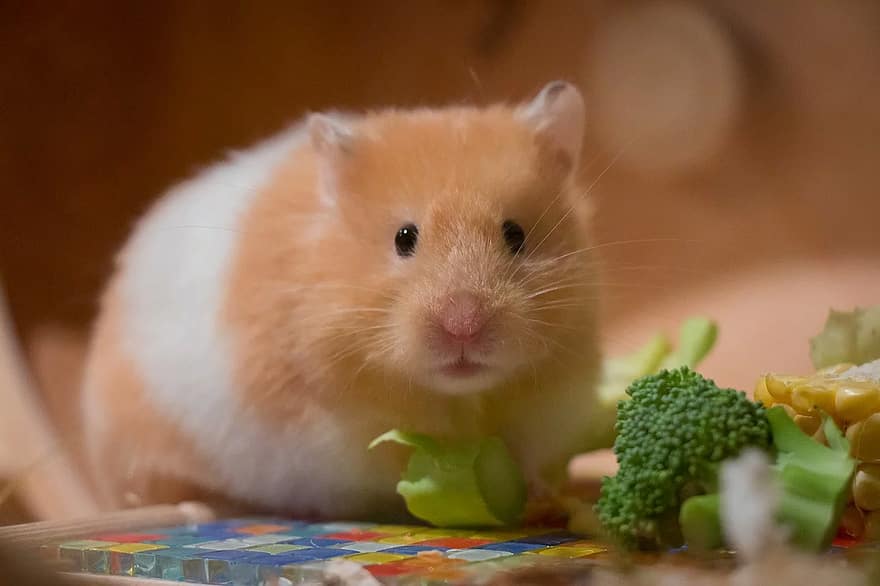 Hamsters are one of the most common pets in the United States, as they’re small, low-maintenance, and fairly inexpensive. They’re also unbelievably adorable.

However, that doesn’t mean that the proper way to care for them is as well-known as it is for cats or dogs. Many people don’t have the first clue what hamsters eat, for example.

If you’ve just brought home a hamster for a pet and you’re stumped as to what to serve for dinner, the guide below will fill you in on everything these little guys love to eat.

The Hamster Diet: An Overview

Contrary to popular belief, hamsters aren’t vegetarians. They’re actually omnivores, which means that they enjoy the occasional bite of meat. However, the bulk of their diet should still come in the form of grains, fruits, and vegetables.

Balance is the key, as you don’t want to overdo it with any one food. Hamsters are known for eating anything they can get their grubby little paws on, so restricting them to one particular food is a recipe for disaster.

One good thing about hamsters is that they won’t overeat, so you can leave food out at all times (note: this does not mean that they can’t become overweight, just that they won’t gorge themselves). It may seem like the food’s disappearing faster than they could be eating it, though, and there’s a good reason for that — they’re hoarding.

You may think that hoarding is a negative behavior; after all, you’re providing your hamster with plenty of food, so why do they feel the need to stash emergency rations all over their cage?

The fact is that this behavior is baked into their DNA, and you can’t change it, no matter how much you argue with them. Hamsters actually get extremely stressed if they’re not allowed to hoard, so you should act like you don’t know about their secret stash under the bed.

Instead of discouraging your hamster from hoarding, you can try to make feeding fun for them. Hide food around their cage and in paper boxes so they’ll have something to forage for. This will likely cause them to hoard even more, but that will just contribute to their feeling of security, like socking away more money for retirement.

Scattering food is also a good idea if you have multiple hamsters, as it prevents them from becoming protective of the food bowl.

Hamster pellets are little chunks of compressed hay, barley, oats, and other grains, with possibly a few other ingredients mixed in.

They should serve as the bulk of your hamster’s diet, as they’re full of fiber and other essential nutrients. However, don’t feed them pellets alone, as hamsters need to eat a varied diet.

Try to buy a pellet that looks completely natural. As a general rule, if it looks gross and bland to you, your hamster will probably love it. Some pellets have dyes and other additives that give them bright colors; just remember that those chemicals are added to make the food look better to you, not your pet.

You can keep your hamster’s bowl full of pellets at all times, and just add in other foods every now and then. 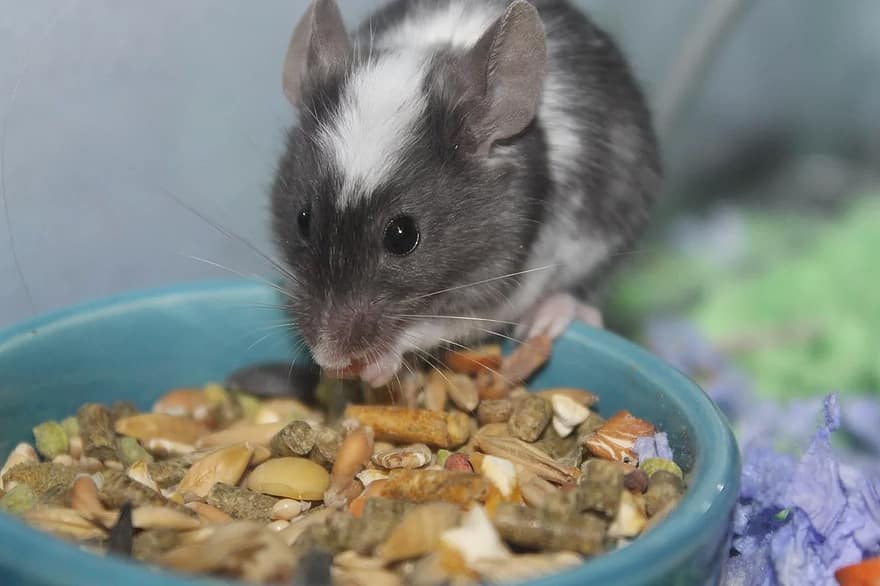 You’ll find muesli-style mixes next to the hamster pellets in your pet food store. They look like they taste better than the pellets do, so you may be tempted to buy them instead.

The problem with muesli mixes is that they’re a combination of health food and sugary treats, and most hamsters will skip the health food in order to gorge themselves on sugar. This deprives them of healthy nutrients and can also damage their teeth.

You can offer your hamster a little muesli as a treat every now and then, but don’t feed it to them exclusively. Even then, there are other treats you can give your pet that are better for them and that they’ll likely enjoy more.

Timothy hay is a grassy-style hay that’s incredibly fibrous. That’s important because hamster teeth never stop growing, so they need to gnaw on something that will file their teeth down (you should also put wooden blocks and other accessories in their cage for this purpose).

It also serves as excellent bedding, so you should have some in their cage at all times. Change it out every day, though, because it’s prone to growing mold if it gets wet.

Hamsters love fresh veggies, especially leafy green ones. Romaine lettuce is one of the best options, as it’s full of vitamins and antioxidants. Avoid the iceberg, though, as too much water can give hamsters diarrhea.

You can also give your hamster broccoli, spinach, artichokes, carrots, cabbage, asparagus, and bok choy.

It’s important to wash the veggies thoroughly before giving them to your pet, as you want to remove any lingering traces of pesticide or herbicide. While it’s extremely unlikely that there’d be enough chemicals on them to hurt you, your hamster is much more delicate.

Fruits are nutritious, but they’re also full of sugar, so they should be given sparingly. Use them as treats more than dietary staples.

Hamsters love apples (without skin or seeds), strawberries, bananas, and pears. Be careful not to give them anything too juicy, as again, excess water can lead to diarrhea. It’s a good idea to avoid citrus fruits as well, as their high acidity can cause digestive issues.

Just like with vegetables, you should wash the fruit thoroughly before serving it. Also, pick up any food that hasn’t been eaten within 24 hours.

Yes, it’s important to include meat in your hamster’s diet, as they need the protein and it’s something they’d eat in the wild. In fact, hamsters have even been known to hunt lizards and frogs in packs!

That doesn’t mean you need to bring home a bullfrog as a sacrifice, though. Most people feed hard-boiled eggs and mealworms to their hamsters, although you can use cooked beef, turkey, or chicken. Crickets, grasshoppers, and other small insects also work.

Just be sure not to feed your hamster any bugs that could attack them, and don’t give them anything that may have come in contact with any pesticides. Also, don’t season any cooked meat that you serve them.

What Not to Feed Your Hamster

Most toxic hamster foods are fairly obvious: Chocolate, caffeine, and alcohol are all bad ideas (yes, even if the hamster is on spring break). However, others might not be quite as self-evident.

Don’t give them any raw meat (except insects), and avoid raw beans and potatoes. Acorns, peanuts, onions, tomatoes, and garlic are all no-nos as well.

Another hazard to be aware of is any food with sharp edges. Remember that hamsters will often store food in their cheeks for hours at a time, so you don’t want to give them anything that could poke them.

Hamsters need a varied diet, but that doesn’t mean feeding them is hard. All you have to do is find high-quality pellets and go from there.

Luckily, hamsters aren’t picky, so you should be able to find a variety of foods your pet will happily gobble down. Now, if you could only get your kids to be so adventurous!