What Do Red-Eared Slider Turtles Eat in the Wild & as Pets? 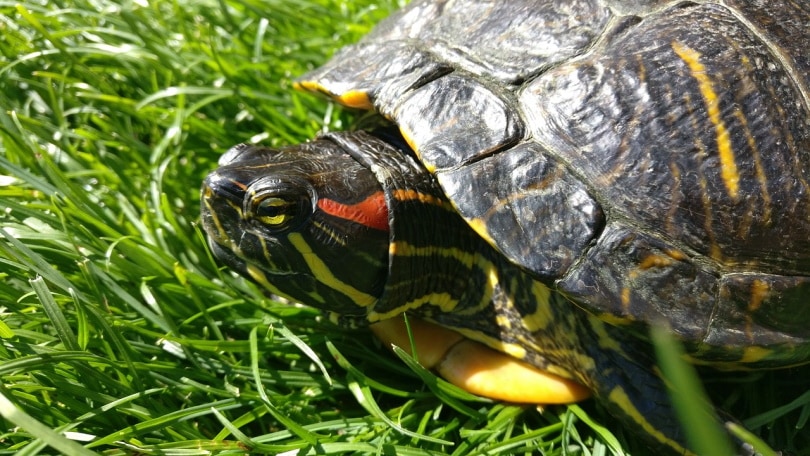 Turtles make fantastic pets. They’re easy to care for, aren’t likely to maul you to death, and are downright adorable (in their own way, of course).

However, many people only look at the positives when considering whether to adopt a turtle, and they overlook a few important negatives. The biggest of these is the fact that many people have no idea how to properly care for a turtle.

That includes knowing what to feed them. Here, we look at the proper diet for one of the most popular species of turtle, the red-eared slider, so you can give them the right food from the moment that you bring them home.

Where Do Red-Eared Sliders Live?

These turtles originate in the southeastern United States, with a heavy distribution around the Mississippi River Delta and the Gulf of Mexico.

They prefer warm climates and typically inhabit ponds and other bodies of water where the water is largely placid. This enables them to quickly climb out of the water if danger approaches or they need to raise their body temperature, as they’re not strong enough swimmers to battle rapid currents that effectively.

While the southeast might be their native habitat, it’s far from the only place that they can currently be found — and humans are largely to blame for that. The species is often kept as a pet, and unfortunately, not all pet owners are responsible.

Many people have gotten tired of keeping red-eared sliders as pets and released them in places where they are not native; as a result, these turtles are currently considered one of the most invasive species on the planet.

Even when they’re inhabiting places that they don’t belong, though, these animals will seek out slow-moving bodies of water. They’re becoming increasingly numerous in urban aquatic areas, owing again to the fact that negligent owners will release them into the wild near their home.

What Do Red-Eared Sliders Eat?

Red-eared sliders are omnivores, but in the wild, they tend to feed primarily on plants. They tend to eat more meat when they’re juveniles, but as they grow older, they transition to a plant-heavy diet.

They’re opportunistic predators, though, and will eat just about anything smaller than them that they can catch. This includes small fish, crickets, worms, snails, tadpoles, and more. They’ve also been known to scavenge on the corpses of frogs and other aquatic animals.

In captivity, it’s generally recommended to primarily feed them commercial turtle food. These foods are specifically designed to give your pet all the nutrients that they need to stay healthy, so you don’t have to worry about accidentally depriving your turtle of essential vitamins and minerals.

You can supplement this food with things like leafy green vegetables, crickets, mealworms, crickets, or even freeze-dried shrimp. However, these foods should be viewed as treats and given sparingly, rather than relied on as an essential part of the turtle’s diet.

These animals will eat just about anything, so be careful about what you drop in their tank. They have no self-preservation skills and will happily munch on things that are toxic to them, like fried foods, so it’s up to you to ensure that they don’t eat anything that will kill them.

Is There Anything That Eats Red-Eared Sliders?

One of the reasons that the red-eared slider has become such a successful invasive species is that they don’t have much in the way of natural predators. Their hard shells protect them from most potential threats, and they have a savage bite that deters anyone who gets too close.

However, that protection only comes once the turtle is mature. Young red-eared sliders have various predators, including skunks, birds, snakes, raccoons, otters, coyotes, and frogs. The only animals that pose a threat to adult red-eared sliders are alligators and crocodiles, but they often can’t be bothered to eat these crunchy little snacks.

The biggest natural threat posed to these turtles comes from humans. Humans hunt them for various reasons, with one of the biggest being an effort to control their numbers in non-native areas.

They also kill large numbers of these turtles accidentally; boat propellors and car tires have both taken out a massive number of red-eared sliders.

Ironically, it’s feared that humans have had such a negative impact on the red-eared slider’s native habitat that they may actually be threatened in those areas, even as they flourish in environments in which they don’t belong.

The Role That Red-Eared Sliders Play in Their Ecosystem

In their native habitats, red-eared sliders play various important roles that help maintain the health of the ecosystem.

As scavengers, they help clear out the bodies of dead fish, frogs, and other aquatic species, and their hunting habits also help keep native fish and insect populations in check.

When feeding on plants, they help prevent certain aquatic grasses from becoming too prolific, and their bowel movements help redistribute seeds in areas with weak currents.

One of their most important ecological roles is that of prey for other animals, however. Many species rely on juvenile red-eared sliders or turtle eggs for food, and the absence of these turtles would have a devastating effect on the food chain of their native habitats.

Why Are Red-Eared Sliders Considered Such a Dangerous Invasive Species?

While red-eared sliders are undoubtedly cute, in many parts of the world, they’re seen as a complete menace rather than as an adorable pet.

There are many reasons that these turtles can devastate non-native ecosystems, including their lack of natural predators, long lifespans, and ability to out-compete smaller turtle species. All these things enable them to quickly dominate new ecosystems, upsetting the delicate balance of life found therein.

In some places, such as Bermuda, these turtles can even hunt native fish species into near-extinction. This can have far-reaching impacts on the local ecosystem because these fish feed on other fish and insects, and without those predators around, their numbers quickly spiral out of control.

Not all the carnage inflicted by these turtles is their fault, however. Many turtles that are bred in captivity for use as pets are given antibiotics while they’re raised, and when these turtles escape or are released into the wild, those antibiotics can interfere with the natural distribution of bacteria in those waterways, with potentially devastating results.

The reason these turtles are given antibiotics is that they’ve long been a source of Salmonella contaminations. Even if those antibiotics don’t leach into the turtles’ new habitats, they can bring large colonies of harmful bacteria with them that can kill animals that haven’t evolved to deal with the danger. What’s worse, many of these bacterial outbreaks are becoming increasingly resistant to antibiotics — again, because of how the turtles were treated when in captivity.

Are Red-Eared Sliders Dangerous to Humans?

The fact that these animals are so often kept as pets should be an indication that no, they’re not dangerous to humans — at least not through direct, traditional methods. That said, they do pack a nasty bite, so keep your fingers clear of their little beaks.

However, there are certain ways in which they pose a massive risk to humanity, albeit indirectly.

The first is the fact that when they enter a new habitat, some of the species that they crowd out of the ecosystem are those that perform jobs like mosquito control, for example (which red-eared sliders do not help with). Once these animals are gone or severely diminished, mosquito populations can explode, and that can lead to a corresponding explosion of disease in humans.

The other massive risk that they pose comes from the Salmonella that they so often carry. You can get sick from handling them, and attempts to treat them have led to the development of antibiotic-resistant strains of the bacteria, which is bad news for you if you do get sick.

A Dangerous Animal in a Cute Little Shell

Red-eared sliders are wonderful little companions — they don’t eat much, never need walks, and won’t judge you when you talk out loud to yourself. However, it’s important that these pets stay pets, because if they get loose in new environments, they can cause ecological havoc.

If you feel like adding one of these little reptiles to your menagerie, feel free — you’re unlikely to regret it. Just be careful to keep them inside your house, or else you could do more harm to the environment than you ever thought possible.

The good news is, however, that they’re easy to catch if they get away.