What Do Weasels Eat? 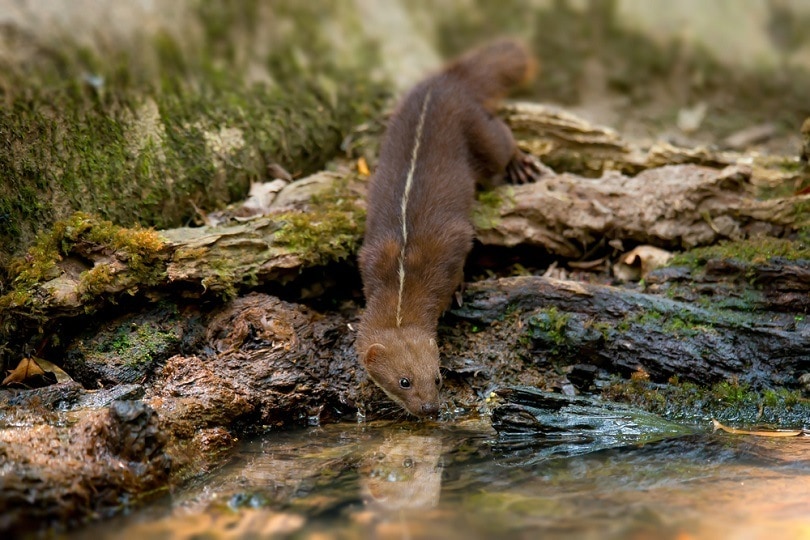 Few animals in the world get as bad of a rap as weasels. They’re commonly associated with untrustworthy, deviant behavior. The weasel’s place in the world is a bit more complex than that, though, and they provide an important service to the ecosystems in which they live. Nowhere is that more apparent than in their diet, which we cover in-depth.

Where Do Weasels Live?

There are various weasel species, and they can be found all over the world except for a few places (parts of Africa, India, Australia, and Antarctica, among others).

They live in a variety of places, including in open fields, but for the most part, they prefer densely shrouded areas that are likely to also house their prey. This means forests, thickets, and farmlands.

Weasels typically reside in burrows that they either dig themselves or take over from less fortunate animals. They have also been known to build nests under trees, rock piles, stacks of wood, and similar structures.

These are nocturnal creatures, so you aren’t likely to see them being active as long as the sun’s up. Fortunately for them, nighttime is also when their prey is most likely to be out and about. But what prey is that, exactly?

What Do Weasels Eat?

Weasels are obligate carnivores, meaning they only eat meat, which is pretty much whatever they can find.

There is one exception, however. Weasels prefer their prey to be alive, so they’ll only scavenge if they’re truly desperate. These animals are excellent hunters, and when they capture their quarry, they’ll eat everything: meat, skin, fur, feathers, bones, etc.

Their primary food source is rodents — specifically, mice, rats, and voles. Many people consider weasels to be vermin just like those other animals, but in most cases, it’s good news if you have a weasel population near you, as that means you won’t have many disease-ridden rodents around.

While rodents make up approximately 80% of a weasel’s diet, they’ll also eat any other small animal that they can catch. This includes birds, fish, snakes, rabbits, and even frogs and lizards. They’ll occasionally eat berries and other fruits, but these aren’t essential parts of their diet.

If times are tough and the weasel is desperate, they may snack on turtles, hedgehogs, and insects or other invertebrates, but these are meals of last resort.

How Much Do Weasels Eat?

Weasels are active animals and they have extremely high metabolisms. As a result, they need to eat as often as 10 times per day — that’s a great deal of hunting!

These animals can’t store fat on their bodies, so they need as many meals as possible. In fact, they’re capable of consuming up to 50% of their body weight every day.

The fact that weasels eat so much makes them essential to the ecosystems in which they reside. Without weasels around to thin out rodent populations, rat and mice numbers would explode and ecological devastation could result.

It doesn’t take much for rodents to become a huge problem, even when they’re not bothering humans. In one experiment, scientists released two mice on an island without a natural rodent population; it took just 5 months for the animals to completely conquer the island.

Out-of-control rodent populations are bad news for birds because they raid their nests and eat their eggs and young. These animals can also devastate plant life because they eat seeds and sprouts before they get the opportunity to grow into mature individuals.

Of course, an animal’s place in the food chain isn’t just about what they eat — it’s also about what eats them. Weasels are no exception, and several larger species rely on them for sustenance. However, there are no species that use weasels as their primary food source because the animals are quick and wily, and emit a foul-smelling odor from their anuses.

The biggest weasel predators are hawks and owls. These birds can spot the weasels from high up in the air, and they can swoop down with ruthless efficiency, often plucking a weasel off the ground before the poor animal even knows they are there.

Foxes and coyotes enjoy the occasional weasel appetizer as well. These animals hunt in much the same way that weasels do — they’re just bigger and stronger.

Snakes have often been known to snack on weasels. As you might expect, there’s a bit of back-and-forth between these two animals, as weasels will eat small, non-venomous snakes, but they can be prey for certain larger species, like boas or big vipers.

Domesticated cats and dogs will eat weasels, and in many cases, they’re kept by farmers for just that purpose. While weasels are highly beneficial for the work that they do controlling rodent populations, they can also be pests, as they’ll eat chickens, rabbits, and other small farm animals.

Are Weasels Dangerous to Humans and Pets?

The vast majority of weasels will run in terror if they see a human approach, so you don’t have to worry about one attacking you out of the blue. However, if you corner them or try to pick one up, they will bite — and their teeth aren’t something that you want to mess with.

They may carry fleas, ticks, and other parasites, but for the most part, they don’t carry diseases that are dangerous to humans. It is possible for them to carry rabies, which is all the more reason for you to leave them alone, but it’s extremely rare.

As for pets, that depends on the pet. Myths abound of weasels killing and eating cats, dogs, and even large livestock like sheep. But most weasels are smaller than the average housecat, so they’re much more likely to make a meal for your pet than the other way around (and they have absolutely no way of taking down a sheep or a cow).

They will try to eat rabbits, chickens, and other small pets, though. If you keep animals like that, it’s important to either keep them inside or make sure that their homes are as secure and weasel-proof as you can make them.

Weasels can carry diseases that are dangerous to other animals, such as canine distemper, Helicobacter mustelae, and even bovine tuberculosis.

Although they seldom get the respect that they deserve, weasels actually play a vital role in maintaining balance in their ecosystems. Without them and their healthy appetites, rodent populations would soon grow out of control, with devastating results.