Where Are Ball Pythons From? Natural Habitat, Behavior & Diet 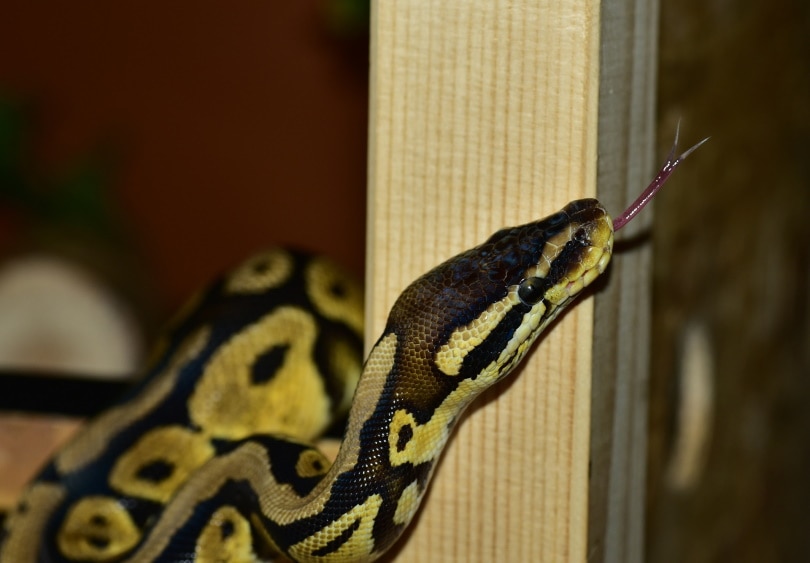 Ball Pythons are among the best pet snakes out there. They are quite docile, not too large, and generally easy to take care of. They’re also gorgeous snakes!

Whether you already own one but are curious about where your snake originally came from or you’re just plain curious about these snakes, we go over the Ball Python’s natural habitat and their diet and behavior when in the wild.

Where Does the Ball Python Come From?

Ball Pythons, also known as Royal Pythons, come from West and Central Africa. They are commonly found in the countries of Senegal, Guinea, Ghana, Togo, Nigeria, Cameroon, and the Central African Republic.

The countries of Togo, Ghana, and Benin are where the most Ball Pythons are exported from (in that order).

The Natural Habitat of the Ball Python

These snakes are typically found in grasslands, savannahs, open forests, and scrublands, but they can also be found near land cleared for farms or other places inhabited by humans.

They spend much of their time in rodent burrows, both on and under the ground. These burrows give them the perfect shelter and a nice moderate temperature to be in.

How Do Ball Pythons Look?

They start about 10 to 17 inches at birth and can grow up to 3 to 5 feet as adults. Some of these snakes have even been known to grow up to 6 feet in the wild!

The average Ball Python has a dark brown base with light brown or golden-colored patches along the top (dorsal) side of their bodies. Their bellies are usually off-white, and they occasionally have yellow stripes starting at the nostrils and continuing through the eyes.

Behavior of the Wild Ball Python

One of the key parts of their behavior is what gives them their name. They curl up into a tight ball in a protective and defensive action, also known as “balling,” with their head at the center. This also means they are not typically aggressive snakes.

They move in rectilinear progression, which essentially means they propel themselves forward in a straight line.

Many Ball Pythons are crepuscular, meaning they are most active at dawn and dusk, but they are also known to be nocturnal and spend most nights being active. They are also generally more active during the rainy season.

What Do Ball Pythons Eat in the Wild?

Adult female Ball Pythons are bigger than the males. They also have longer jaws, which means they can essentially swallow more, making them better hunters.

Ball Pythons are carnivorous, and they use visual and chemical cues for hunting. They tend to wait and ambush their prey because they are rather heavy-bodied. They can pull their heads back and quickly strike and then swallow their prey alive, but they usually use constriction.

Ball Pythons primarily prey on rodents and play a vital role in controlling these pests, particularly for farmers. Common prey for the Ball Python includes:

They are also known to prey on birds and bats.

Reproduction of the Ball Python

Ball Pythons usually breed during the rainy season, which ranges from mid-September to about mid-November. The female lays a clutch of one to 11 eggs around mid-February to early April, and she coils around her eggs until they hatch. Baby Ball Pythons use their egg tooth to cut open the shell and slither their way out.

Predators of the Ball Python

They tend to seek cover to avoid detection and attempt escape using camouflage, bluffing, and biting, along with the famous “balling.”

Current Status of the Ball Python

The International Union for Conservation of Nature’s Red List of Threatened Species has listed the Ball Python population as decreasing, and they are under the Near Threatened category.

The main threats are from poaching for their meat and skin and the change and loss of habitat through agriculture and pesticides. However, the most significant threat is the exotic international trade. Ball Pythons are the most heavily traded animal from Africa, as listed by the Convention on International Trade in Endangered Species of Wild Fauna and Flora.

Ball Pythons are amazing snakes that are highly beneficial for the ecosystem in their native Africa. They are highly regarded in rural areas and with farmers for keeping the pest population under control.

Due to their popularity as pets, in a matter of years, their status has gone from of “least concern” to “near threatened.”

For this reason, if you’re on the lookout for a new Ball Python, only buy captive-bred snakes and only from reputable breeders. This helps protect wild Ball Pythons and ensures that your new snake is in good health and well-adjusted.