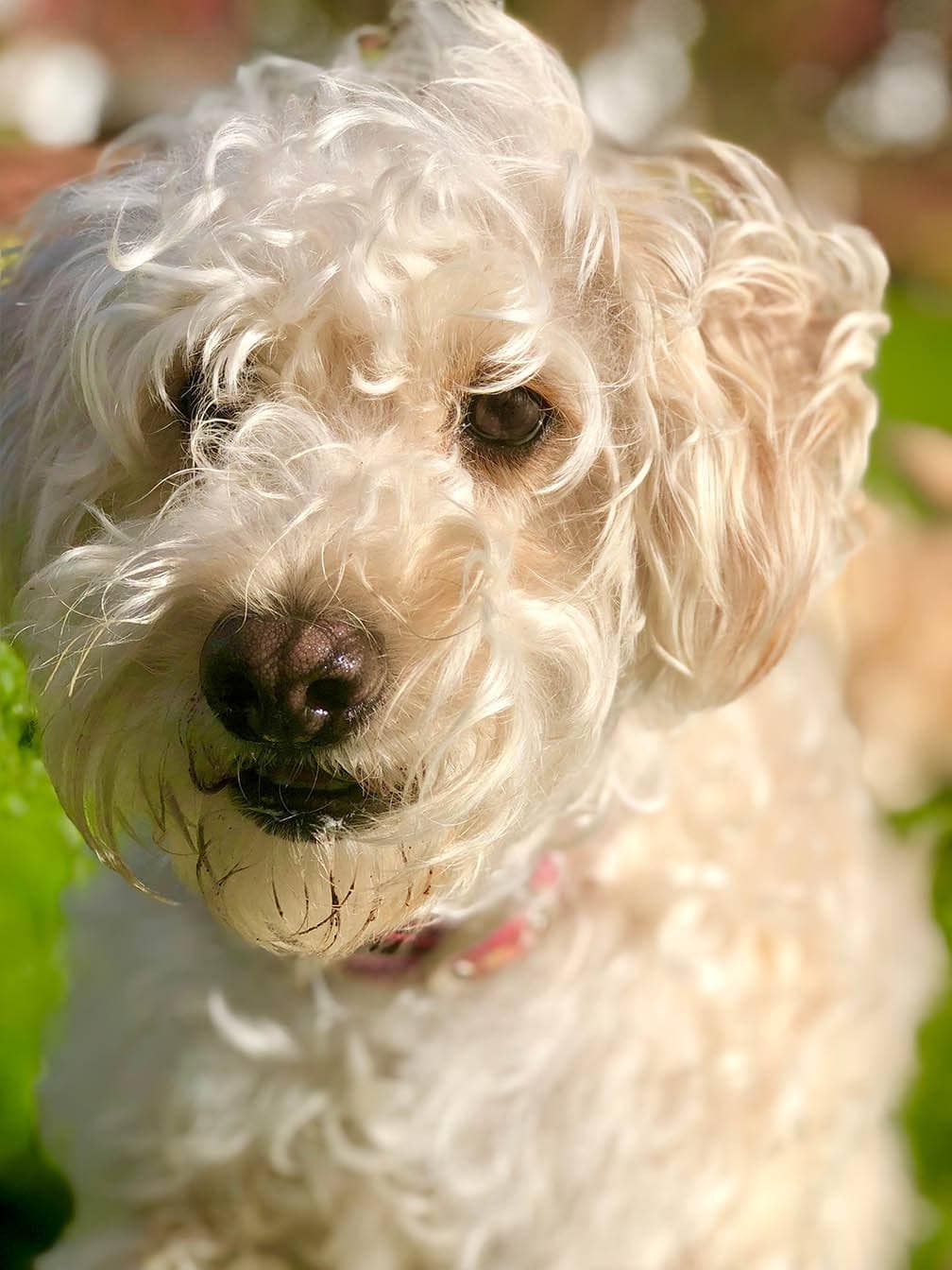 The Whoodle is a mixed breed being a cross between a Poodle and a Soft Coated Wheaten Terrier. He is a medium sized dog with a life span of 12 to 15 years. Most commonly the Standard Poodle is used but the Miniature can be used also to create a smaller Whoodle. He is also known as Swheat-N-Poo, Wheatendoodle, Wheatenpoo, and Sweatenpoo. He can be found taking part in agility events and is an active and fun loving dog.

Where does the Whoodle come from?

The Whoodle is also known as a designer dog. Designer dogs are usually two purebreds crossed to create an offspring who is often also given a name that blends theirs together. Over the last 30 years there has been a huge increase in awareness and popularity for these crosses. Celebrities have them, your neighbors have them, you see them on TV and in Movies. If the Whoodle or another designer dog is the dog for you make sure you research the breeders before you buy. There are sadly a lot of puppy mills and bad breeders taking advantage of this trend to make quick and easy money who are taking no care of their animals, and are combining breeds without any thought or care.

Another thing a lot of these dogs have in common is the lack of information on them. Many have no origins known and the Whoodle is one of them. To get a better idea about this dog all we can do is look at the parent origins and temperaments.

The Poodle is very old breed first bred to hunt waterfowl. While his origins are believed to be German it was in France where he became something far more distinct. Three sizes of Poodle were bred, the Standard, the Miniature and the Toy. The first two sizes remained useful as working dogs as well as companions but the Toy was solely a companion dog popular with the French aristocracy. He came to England in the mid 19th century and to America in the late 19th century. The clipping elaborate styles and dying was adopted when the French saw the Gypsy do the same for the circus.

Today he is a very clever breed with a long memory and an eagerness to please that makes training quite a breeze. He is also loyal and while he may appear to be dignified he is happy to clown around too. He loves people and is very affectionate and protective.

This dog is from Ireland where he was a farm dog who helped hunt vermin and small game, protected the owners and property acting as guard and watchdog. His history other than that is not well known. He was recognized in Ireland as a breed in 1937 and came to the US in 1946.

He is a confident dog, happy and alert. Today he is no longer a great watchdog as he is too friendly with strangers. He gets on well with children and other dogs but still has that instinct to chase smaller animals. He gets dirty very easily so is not the dog for you if you like a very clean home!

The Whoodle is a fun loving and active dog full of energy, very friendly and playful. He is loving and affectionate with his family and loves to be at the center of attention. He can be quite entertaining and is intelligent. He gets along well with children and other animals. As an excellent family dog he is very loyal and a great companion. He can have an independent streak especially if he is more like the Terrier than the Poodle. He is very easy to love and is a great dog to have around.

The Whoodle is a medium sized dog and can weigh between 20 to 45 pounds and stand 12 to 20 inches tall. He has a round head, almond shaped medium sized eyes and a medium sized muzzle. His ears hang down and his tail is long. He has a body that is well proportioned with a deep chest, and strong legs. His coat is medium/long, wavy to curly, luxurious and soft. Sometimes when he is born he has a darker coat that then lightens as he grows. Common colors include black, apricot, red, chocolate, silver, spotted, wheat and white.

How active does the Whoodle need to be?

He is a fairly active dog with a lot of energy. While the play he engages in when indoors can be part of his mental and physical activity needs he also needs time outside each day. Two daily walks or one longer walk, trips to a dog park are both great. If he is not getting enough activity he will become destructive and he could become obese. He would be happy to join you on a jog or run if you are active yourself. He can live in an apartment as long as he gets out each day. Access to a yard would be a bonus as a place for him to play but not a requirement.

The Whoodle is moderately easy to train. He has intelligence and he is enthusiastic and eager to please but he can have a stubborn side that slows things down slightly. He will train at the same rate therefore as most dogs. He should be given early training and socialization as it will help to make him the best dog he can be. Be firm and consistent with your approach and use positive rather than negative techniques. Reward and encourage using treats and praise for example. He needs you to be clear about being pack leader and dominating him but without being harsh or physical.

Living with a Whoodle

He does not shed a lot and both parents are hypoallergenic so he is too. This makes him great for people not wanting a lot of pet hair to clean up each day and for people with allergies. His long hair will need brushing or combing each day to remove tangles and he will need bathing but keep it to just when he really needs one. Bathing dogs too frequently damages their natural oils in their skin. You can try dry shampooing too. Because his hair is on the long side he will need to visit a professional groomers every 3 to 4 months to keep it under control. While there you could also have her nails clipped or do it yourself but take care not to cut too low down. Her ears need checking and wiping once a week and her teeth should be brushed at least three times a week.

He gets along well with children and other dogs and pets and early socialization can help that too. He is known to be affectionate with them, playful and happy. Younger children may need some supervision just to ensure they do not get too rough with him as they do not yet know how to play nicely. This is something that should be taught to children.

Some Whoodles can be good watchdogs though not guard dogs, but some are not good at either! Sometimes they are too friendly and happily greet even strangers as friends. He barks rarely and will need 1 1/2 to 2 1/2 cups of high quality dry dog food a day, which should be given to him in at least two meals. He is good in most climates.

When buying a puppy visit the breeder to see their facility, the conditions the puppy is kept in, and possibly the health of any other animals there. This is the best way to judge what kind of breeder you are buying from. Also ask to see parental health clearances. Possible issues the Whoodle could inherit from his parents include Addisons, Cushings, Von Willebrand, Bloat, Epilepsy, Legg-Perthes, Skin problems, Patellar Luxation, Eye problems, Hypothyroidism, Kidney Problems, PLE and Hip dysplasia.

Costs involved in owning a Whoodle

A price range at the moment for a Whoodle puppy falls between $650 to $1600. Where you are, the age of the puppy, where you buy from, what is included and how trendy the designer dog is are all factors that can change that price at any given time. Other costs include a crate, carrier, chipping, collar and leash, neutering, blood tests, deworming and shots. They come to $455 to $500 though some may be included in the puppy’s price. Other costs each year are for medical essentials like check ups, pet insurance, flea prevention and shots coming to $460 to $500. Non-medical annual costs for thins like license, training, long hair grooming, food, toys and treats come to $675 to $775.

Looking for a Whoodle Puppy Name? Let select one from our list!

The Whoodle could be the perfect dog for you. He can live in a house or apartment, with a family, couple or single, young or senior and even with allergy sufferers. He does need some activity though and even with his great personality early socialization and training are still important. Give him what he needs to be happy and healthy and he will give you unconditional love and affection.