Why Do Cats Like Catnip? What You Need To Know! 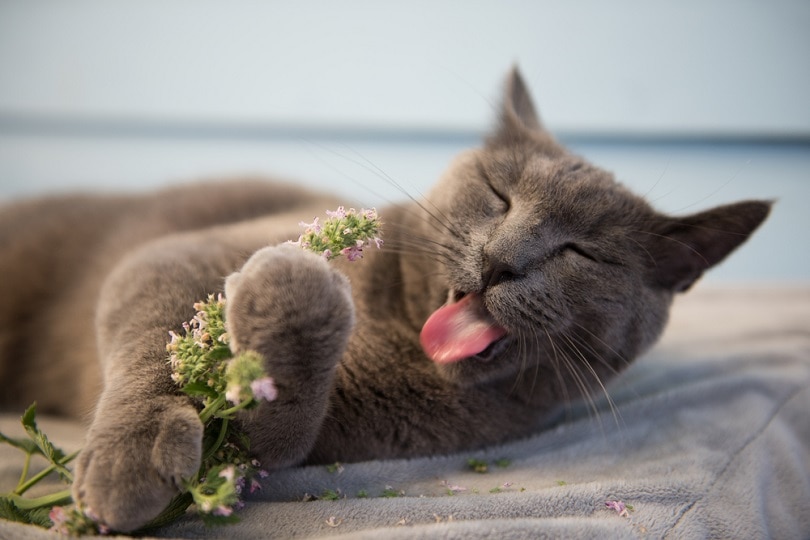 From catnip mice to catnip-infused litter, the list of cat products containing this irresistible herb is seemingly endless. If you’re a cat owner who’s witnessed the rapturous response of your kitty in the presence of catnip, you can certainly testify to its appeal! But have you ever wondered why cats like catnip so much?

Cats like catnip because it contains a chemical that produces intense feelings of happiness and euphoria in their brains. Many cat owners joke that their cats get “high” on catnip but that’s not an entirely inaccurate description of what’s happening. Keep reading to learn more details about how catnip attracts cats and why some cats don’t seem to respond to it at all.

Catnip (Nepeta cataria) is an herb from the mint family. The plant is originally from Europe and Asia but is now grown throughout North America as well. Besides being popular among cats, humans also use the herb in tea and as a seasoning.

The catnip plant is easy to grow and will return year after year. Many cat owners choose to cultivate their own, much to the delight of their feline companions.

Nepetalactone is the chemical in catnip that is responsible for the crazy cat reactions. A study found that this substance acts as a stimulant to cats, increasing endorphins and feelings of euphoria. The chemical seems to mimic the pheromones produced when female cats are in heat and many of the observed behaviors are similar.

When cats rub their faces in catnip, they get the chemical on their faces and in their noses. The scent of nepetalactone triggers a sensory reaction in the cat’s brain.

Interestingly, the study also found that catnip oils act as a natural insect repellent, perhaps explaining why cats originally were drawn to the herb. Besides catnip, nepetalactone is also found in the silvervine plant, which is related to kiwi. Silvervine is often used similarly to catnip.

The strongest effects of catnip usually last about 10 minutes in cats. Reactions can include drooling, hyperactivity, an enhanced state of relaxation, or even growling and aggression. After the effects wear off, cats will be immune to catnip for the next hour or two.

If you’ve tried offering catnip to your cat only to find they either ignore it or dislike it, don’t worry, there’s nothing wrong with your kitty! Multiple studies have found that as many as one out of every three cats has no reaction or response to catnip. About 20% of cats don’t respond to silvervine either.

Whether or not your cat responds to catnip appears to be an inherited trait. Even wild cats like lions, jaguars, leopards, and snow leopards can show reactions to catnip. However, most tigers show no response or actively dislike the herb.

Is Catnip Bad For Cats?

Because the cat’s response to catnip is so often compared to a drug, it’s natural to wonder whether catnip is addictive or bad for cats. Thankfully, catnip has no known long-term impacts on a cat’s brain or health. Nor is it addictive, in fact, habitual use may lead to less response over time.

Cats who lick and swallow large amounts of catnip may find themselves with an upset stomach. It’s also probably not a good idea to keep offering catnip to kitties who have extreme or aggressive responses. This is especially true if you have multiple cats whose reaction to catnip involves getting into fights with each other!

How To Use Catnip

Besides giving your cat a rotation of catnip toys, there are several other ways you may find the herb useful. Silvervine sticks are commonly sold as chew objects. You can also use catnip and catnip products as training tools.

Maybe you need to teach your new kitten to use the litter box or help an older cat struggling with litter box avoidance. Perhaps you’d like your cat to start sleeping in their own bed rather than yours. A nice sprinkle or spray of catnip could be just the thing to draw your cat’s interest towards the box or bed.

Watching a cat react to catnip can be wildly entertaining, one of the sneaky pleasures of cat ownership. We hope you’ve enjoyed learning more about the science behind why cats like catnip.

Why not go pick your kitty up some new catnip toys to celebrate your newfound knowledge? If your cat happens to be that 1 in 3 who don’t care for catnip, don’t worry there are plenty of other toys and treats out there for them!