Why Do Horses Let Us Ride Them? 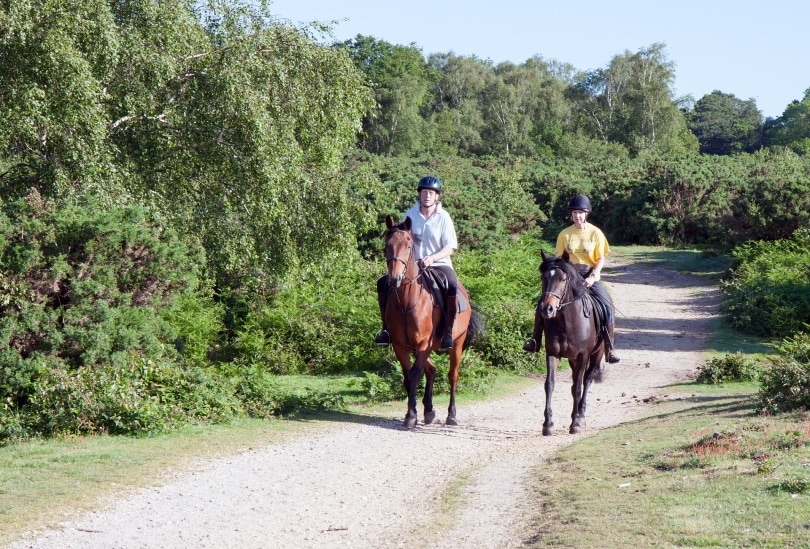 When you approach your horse to groom it, saddle it up for riding, feed it, or for any other reason, your horse is generally unafraid and will let you walk right up to it. You can even touch your horse without worrying about it rearing up or attempting to bite you. But try any of this with a horse in the wild and you’ll get a totally different response. Likely, you won’t even be able to get close enough to a wild horse to touch it without the horse bolting away from you.

So, if wild horses don’t want to be approached by humans, then how is it that we are able to ride the horses filling stables across the world? Why do horses let us ride them? Especially when it’s clear that their natural instincts are to run from people and not let them get close? It boils down to domestication and trust, which are common to all horses that people ride.

When Were Horses First Domesticated?

There’s a bit of argument around the beginning of horse domestication. It’s currently believed that horses were first domesticated in northern Kazakhstan more than 6,000 years ago, though this is contested by some. The earliest evidence of horses being ridden dates to about 5,000 years back. Horses weren’t used for pulling chariots until around 2,000 BC.

Horses, much like humans, have their own unique personalities. While certain breeds may be predisposed to certain personality traits, each horse, even among the same breed, will exhibit its own personality that isn’t quite like any other horse. They all have their own tastes and quirks, and because of this, nothing is common to all horses.

Many horses definitely like being ridden. They’re not suffering when being ridden and they seem to get excited when they know they’re going to be taken for a ride. Once a horse has a bond built with its owner, it enjoys the time spent together.

How Can You Tell if a Horse Wants to be Ridden?

So, how can you tell when a horse wants to be ridden? If not all horses like being ridden, you need some clues to let you know when a horse doesn’t want you to ride it and when a horse is comfortable with it. Luckily, horses give several signs that they either do or don’t want to be ridden.

Signs a Horse Doesn’t Want to be Ridden

Signs a Horse Does Want to be Ridden

Most people purchase horses that are already trained to ride and don’t give too much thought to what it takes to train a horse for riding. It’s a bit of a complicated process, and it requires building a lot of trust between the trainer and the horse.

Horses don’t respond well to harsh training methods or cruel trainers. Instead, they must feel safe so they can build a trustworthy relationship with not just their trainer, but humans in general. This will make it possible for other people than the one who initially trained them to ride later on.

Still, each person who rides a horse must build a certain degree of trust with them, which is why you hold your hand out to a horse before just walking up and jumping on.

Of course, training isn’t just about building up a relationship and trust with the horse; it’s also about teaching them how to ride. It’s something that a horse must get used to. Even horses born in domestication don’t naturally know how to ride, despite having thousands of years of domestication in their blood.

Trainers spend ample time teaching the horse to be led, then to be ridden, which means they must learn to understand many cues, gaits, and more. It’s a difficult process that requires dedication and knowledge to complete.

Most riders don’t know that much about training a horse to ride as it takes a specialized skill set. So, even horses that could be ridden, any full-size domesticated horse, aren’t always necessarily rideable.

Why Do Horses Let Us Ride Them?

A horse’s natural instinct in the wild is not to let a human close enough to touch it, let alone ride it! So, why do horses let people ride them? In the end, it boils down to three basic traits; domestication, training, and trust. Horses have thousands of years of domestication built into their genes and it affects their behavior. Additionally, horses that are ridden have undergone extensive training that built trust over time. This trains them in the physical ability to be ridden, while simultaneously building up trust in their trainer and humans in general.