Why Do Roosters Make a Crowing Noise? 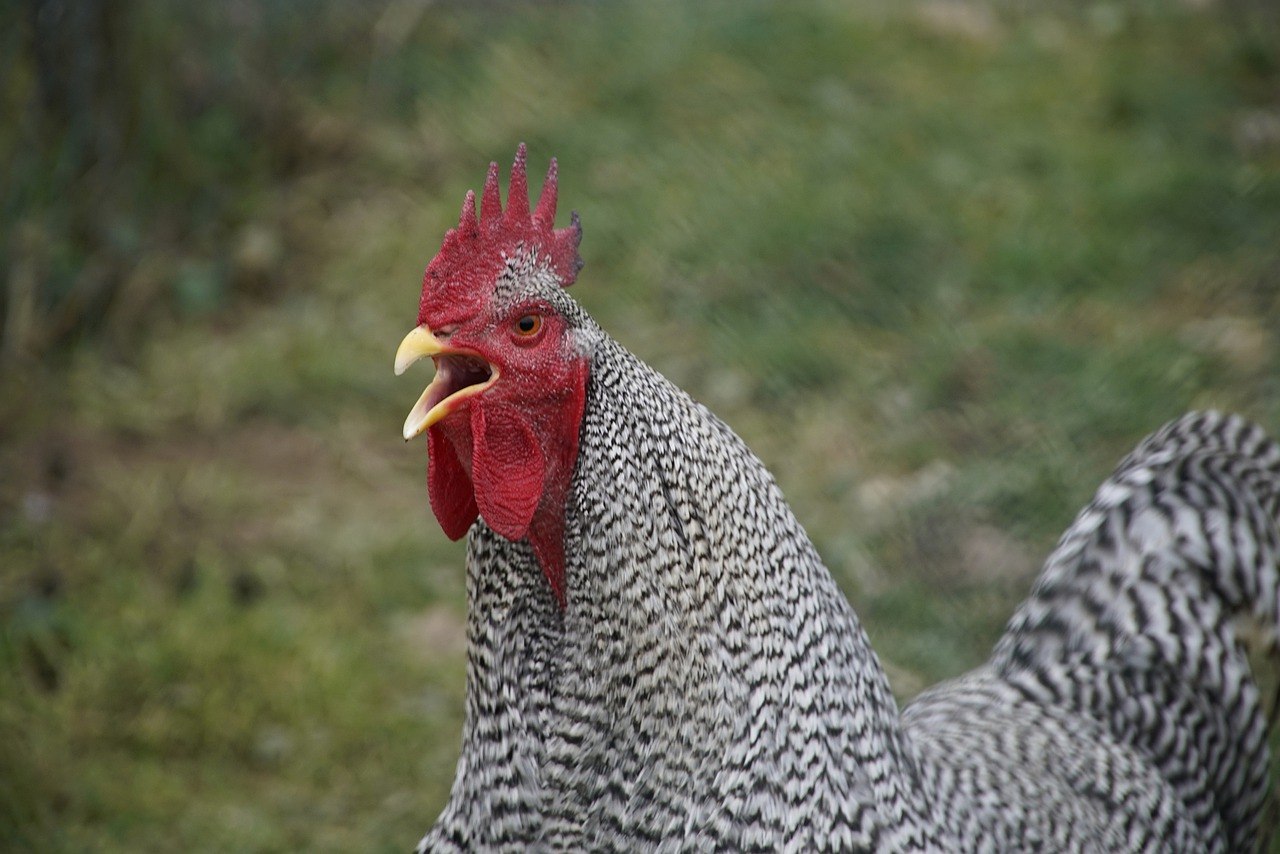 Half of all chicken eggs that get hatched will be roosters and the other half hens. While hens are prized for their eggs, roosters are often maligned because they crow. A rooster’s loud and piercing “cock-a-doodle-do” crowing noise is the one trait that’s talked about most when it comes to roosters.

Unlike hens who are praised and appreciated, roosters are often viewed as a nuisance, with some cities and towns outright banning them because of their crowing. It’s no secret that roosters crow and they crow a lot.

Some people living near roosters are surprised to hear roosters crowing in the afternoon because it’s often thought that they only crow at daybreak. While they’re famous for their early morning wake-up calls, roosters do crow throughout the day and sometimes all night too.

We’ll delve into rooster crowing and explain a bit about it here so you’ll know what’s up with all that crowing! But before we explain crowing, we’ll tell you a little about roosters and their importance in flocks.

You Can Expand Your Flock with a Rooster

While it’s not necessary to have a rooster in a flock of backyard chickens, there are some advantages to keeping a rooster. First and foremost, a rooster will provide you with a way to increase the size of your flock. When you add a rooster, it will mate with most of the hens in the flock.

A Rooster is the Head of the Flock and Its Protector

A rooster serves as the primary defender against danger by constantly watching over the flock. When a rooster senses danger, it will alert the flock and fight off nearly any animal that threatens his hens or their eggs. A rooster will also keep peace within the flock by protecting the hens from each other when disputes break out.

A rooster is the top of the pecking order in a flock. If a flock has two or more roosters, they will battle it out to determine the pecking order by strength. The strongest rooster will always win out and be the head of the flock.

A fight between roosters to establish who’s the boss involves pecking, kicking, and scratching but it doesn’t last long. Once the weaker roosters run off, the dominant rooster takes over as flock leader. Sometimes the dominant rooster will continue to go after his opponents in an attempt to finish them off, which could cause injuries or death. That’s why it’s important to be close by so you can separate the roosters if need be.

Now that you know the role of a rooster in a flock, it’s time to look into all that crowing noise roosters make! Here are the main reasons why roosters make a crowing sound.

1. Crowing is an Audible Confirmation That All is Well

We enjoy regular assurances that all’s well in the world and so do chickens. While we humans tend to focus on how crowing affects our sleep, roosters see things differently. A flock of chickens checks in with one another by calling, much like we do with texting each other on our phones. But why do roosters crow all day? They crow periodically throughout the day to announce to the flock that everything is good in their world.

When a rooster is foraging and finds something good to eat, he will announce it to the hens by crowing. The crowing is a way to call the hens to the food source whether the food is some seed you’ve tossed down or a group of insects crawling on the ground.

Next, why do roosters crow at dawn? In addition to the ‘all clear’ crowing a rooster makes, it also crows in the morning to signal to the flock when it’s time to wake up and start foraging. Once the flock has awoken and finished their morning feeding, they proceed on with their day. The flock will bask in the sun, doze off, and do some egg-laying as chickens do. It’s the rooster that often decides when rest time is over and will call the hens by crowing to get them up and foraging again.

A Rooster’s Crowing is Different Than Its Warning Call

Just as a rooster crows to awaken the flock, to signal there’s food nearby, and to tell the hens all is right in their world, the flock leader also sends out a loud alarm call when something’s amiss. Shrill and very loud, a rooster’s alarm call triggers the hens in the flock to instantly freeze or hide.

So why do roosters crow in the morning? When a chicken coop door is opened in the morning, you can bet that the first one out is the rooster. He will check for predators like hawks, foxes, and owls and only crow if the coast is clear. Otherwise, he lets out a loud & shrill alarm call that sounds much different than the “cock-a-doodle-do” crowing sound.

The hens in the flock will stay on lockdown until the rooster crows to tell them that they’re safe. The birds that ignore the rooster’s alarm call are the ones most vulnerable to predators and they don’t get any second chances. A hen out in the open doesn’t stand a chance against a hungry hawk swooping in to snatch up a good meal.

Learn to Appreciate a Crowing Rooster

A rooster is the keeper of the flock and he’s often the most beautiful bird in the coop. Roosters epitomize small farm life and they appear in branding the world over. Roosters symbolize power, beauty, and dominance. These regal birds are often associated with the break of day and rising early to get a good start.

It’s natural for a rooster to crow. If you’re fortunate enough to hear one crowing, stop and think about what that crowing means and the important role the rooster plays for his flock. He’s the leader, the keeper, and the defender. There’s no way to stop a rooster from crowing so learn to live with it or move away from the flock he’s tending.