8 Reasons Why Dogs Howl (And How to Stop It) 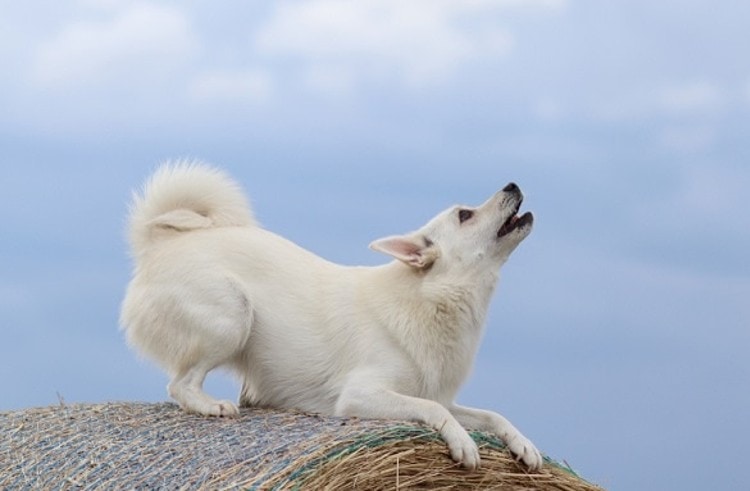 You probably associate howling with other canines, such as wolves and coyotes. That’s how dogs communicate, whether it’s barking, yipping, or whining. Of course, they also use body posture and other means to let you or other animals know what’s going on with them. It’s evident that our pets have something to say. The question of what howling says has several reasons that may surprise you.

It’s often helpful to consider a dog’s job to understand why howling might benefit an animal. The ambient volume of your home may play a role in the behavior of your dog. The other thing to think about is the dog’s upbringing. Canines aren’t unique in picking up bad habits or unwanted behaviors from their environment. However, gender and genetic differences can also explain why some pets vocalize more than others.

1. Communicating with Other Canines

Selective breeding has had a profound impact on dog behavior, including howling. Some breeds are noisier than others because it’s part of their DNA. Siberian Huskies and other sled dogs are perfect examples. Communication is part of their job, so it only makes sense that these pets would howl regardless of whether they were part of a team. It comes naturally to them.

Those vocalizations also cross species lines. Wolves and dogs share a common ancestor that goes back about 27,000 years. Nevertheless, your pet uses howling often in the same way that other canines do—to broadcast their presence. You’ve likely experienced it where one pup started carrying on with another in the vicinity soon following.

2. Excitement on the Hunt

Often, dogs use howling to show their excitement. It could be a ride in the car to the doggie park or a walk around the block. You’ll often find a big smile often accompanies this behavior. It’s also something you may see with pups that hunt together in groups, such as beagles. The excitement of the moment is enough to get one dog worked up in a contagious frenzy.

The purpose of all canine vocalizations is to get attention, whether it’s you, another dog, or a stranger. It’s the message that they convey that varies. Howling has a particular urgency about it that is hard not to notice. A pet that is in pain or injured may howl because something hurts, or it needs help. It also gets the word out for distances up to 10 miles away.

Howling can also signal sorrow or loneliness. Pets with separation anxiety often vocalize once their human companion has left them. It is an emotion of intense emotion. Distress is a feeling that comes online shortly after birth for both humans and dogs. Therefore, it’s not a stretch to surmise that your howling pet is very upset.

Fear is another early emotion in your dog’s repertoire that may cause your pup to howl. It’s essential to remember that your pet has the emotional intelligence of a 2 ½-year-old child. It might not understand that fireworks or thunder don’t pose an immediate threat to it. Instead, your dog conjures up these strong emotions with howling to show how it feels.

It might surprise you to learn that howling has an adaptive evolutionary basis. Animals like wolves and coyotes use it to define their territories. You can think of it as an audible warning to other competitors that this space is occupied. It’s an efficient way to get the word out loud and clear to avoid a fight that could jeopardize the survival of either one.

Dogs pick up on associations quickly. Sometimes, that leads to undesirable behaviors like howling. It won’t take a pup long to figure out that if it howls, you’ll let it back inside the house or feed it. This pattern is called conditioning. Every time that you respond to it, reinforces the association. Pretty soon, a pet learns what it must do to get you to do what it wants.

An unexpected reason that a pet may howl is in response to a siren, whether it’s from the fire station or a train whistle. It occurs not only with dogs but coyotes, too. It’s unclear what motivates canines to act this way. The answer may simply be that the sound resembles their vocalizations. And just like the one dog that gets the pack riled up, the siren elicits the same response.

The first thing you should do is get your dog to the vet to rule out any physical reasons for your pet’s behavior. You should note whether there is an obvious trigger, such as being left alone. That can help point to a solution to correct your pup’s howling.

Some pets will seek attention even if it’s negative. That’s often the case with howling. It can also go back to one of our previous reasons. The owner may have taught their pet to use it to get something. The solution is to replace the bad habit with something more appropriate. For example, giving a pup a treat when it’s quiet will form a positive association.

The other side of the coin involves modifying your behavior. It’s imperative not to reward a pet that misbehaves. Remember that we’re using that word loosely. Every time you reinforce howling with something positive makes it that much more difficult to curb. Scientists call this sequence of events the Premack Principle. The vital thing is to break the chain and to replace it with something else.

It may take several attempts to get matters under control. Reinforcing positive behaviors can make other training tasks easier. Remember that treats are a positive motivator—if they don’t exceed 10% of your pup’s daily caloric intake.

It’s essential to understand that dogs want to communicate with their owners. Vocalizing is one of the best ways they can. Unfortunately, some pets push the envelope with inappropriate behavior, such as howling. Realizing what’s behind your pup’s motivation can provide valuable clues to controlling it. It begins with exploring your dog’s behavior and your response to it.

Chris has written on a variety of topics since 2009. Her motto with all of her writing is “science-based writing nurtured by education and critical thinking.” She specializes in science topics, with a special love for health and environmental topics, and of course, pets of all shapes and sizes.

Chris lives happily with her hubby and three cats in the land of 10,000 lakes, writing, wining, and boating as much as she can. She and her husband, Norm, were awarded the State of Kentucky Colonel Honor for their restoration work at Mammoth Cave National Park. Chris’s current passion is wine. She has her WSET 1 and 2 certifications and is currently pursuing her Certified Wine Specialist Award (CSW).

Chris has written on a variety of topics since 2009. Her motto with all of her writing is “science-based writing nurtured by education and critical thinking.” She specializes in science topics, with a special love for health and environmental topics, and of course, pets of all shapes and sizes. Chris lives happily with her hubby and three cats in the land of 10,000 lakes, writing, wining, and boating as much as she can. She and her husband, Norm, were awarded the State of Kentucky Colonel Honor for their restoration work at Mammoth Cave National Park. Chris’s current passion is wine. She has her WSET 1 and 2 certifications and is currently pursuing her Certified Wine Specialist Award (CSW).