Why Do Dogs Sneeze When Excited? 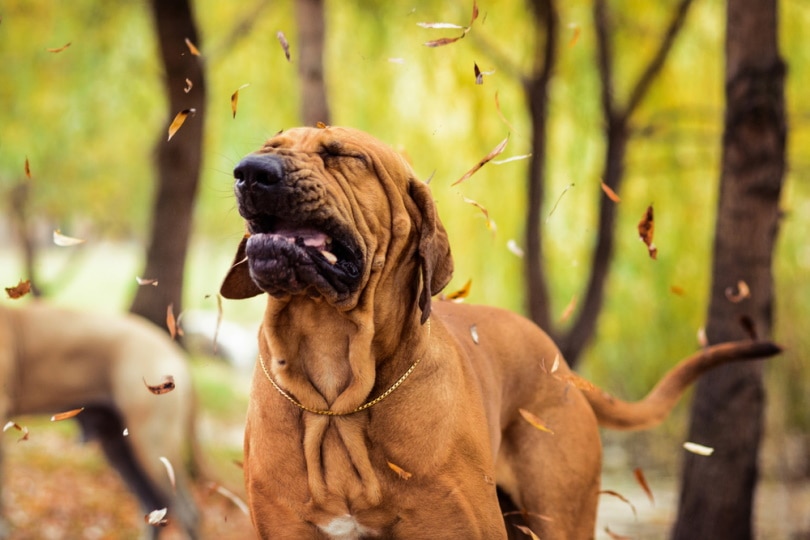 If you’re a dog owner, you’ve likely seen them sneeze when excited and wondered what it was all about. We know dogs have sensitive noses. Watching them sneeze when they’re happy may make us laugh, and since it happens so often, we consider it to be normal behavior. But why does this happen? Is it ever something serious that we need to worry about?

We might watch our dogs sneeze when they’re playing with another dog, welcoming us at the door after a long day, or enjoying a toy or treat. If they’re excited, you’ll know it. That huff of air through their noses doesn’t lie!

Here are a few reasons that this occurs to help us understand our silly pooches a little better.

1. They’re So Excited (and They Just Can’t Hide It)

The excited sneeze is really more of a snort. It’s a sudden rush of air out through the nose that can sound like a huff. The reason for this is simply that they’re happy. It isn’t a true sneeze.

What is a True Sneeze?

A true sneeze starts when something irritates or tickles the inside of the nose. The dog will then sneeze, starting in their chest, to try to expel the irritant. This is often accompanied by saliva or mucus.

If your dog is sick or suffering from allergies, you’ll notice other signs. Red, runny eyes, a leaking nose, and coughing are things to watch for if you think your dog might have a respiratory infection. This sneeze will also occur when the dog isn’t necessarily happy or excited.

The cause of this isn’t an irritant in the nose. Dogs aren’t doing this to try to clear their noses. This is a much shallower sneeze, usually just a huff of air through a harsh exhalation. It can sound like a sneeze and sometimes even produce saliva. But it’s an emotional response rather than a physical one.

This excited sneeze can be used as a signal to calm a situation before it gets out of control. This is part of a dog’s body language toward another dog. In the middle of roughhousing, one or both dogs could start excitedly sneezing. This serves as a reminder to each other that they are just playing. Neither is trying to start a real fight.

When a dog excitedly sneezes toward you during play, they are telling you that their intentions are peaceful. Even if they’re growling while tugging on a toy that you’re holding, that sneeze is to let you know that they’re not being aggressive.

If a dog doesn’t excitedly sneeze that much, they still understand and appreciate the cues from other dogs!

When a dog approaches another dog and excitedly sneezes, they’re inviting that dog to play with them. They’re telling the dog that they are interested in just playing, not an actual fight. As the play becomes more intense, you may notice the dogs sneezing more. This is a reminder for them to keep it fun. It also means your dog is having a great time! If you’ve ever witnessed a real fight between dogs, you know that this type of sneezing doesn’t occur.

These shallow sneezes are a way of communicating for your dog and aren’t anything to be concerned about. If you notice your dog sneezing more than usual and the cause is not excitement, play, or happiness, it’s time to figure out what the cause might be.

Sometimes, a sneeze during play is due to the facial expressions that dogs make. A curling lip or opening and closing their mouths to playfully bite something could cause their extra-sensitive noses to itch. If a dog’s nose gets touched or bumped, it could cause a sneezing reaction. Playing outdoors can also kick up dust, dirt, grass, pollen, and other things that are almost immediately inhaled by the dog. If the nose is irritated, a sneeze will clear it quickly so play can continue.

In a study of African wild dogs, these animals were also observed sneezing. One dog would sneeze as a way to start a hunting trip. Other dogs would then join in, getting excited about the suggested activity and sneezing in return.

Researchers noticed that the hunt would only happen if enough dogs sneezed. It was like the initial sneezer’s way of asking, “Hey, should we head out now?” If the reply was only a few sneezes, the dogs would sleep instead. If the majority of the dominant dogs sneezed, the pack would start on the hunt.

It also depended on who was sneezing. If the first sneezer trying to start the hunt was a pack leader, the hunt would happen even if just a few sneezes were returned. If the dog was of a lower rank, many more sneezes would need to happen for the hunt to start.

Passed on from wild ancestors, the excited sneeze is just another way of communicating.

When to Be Concerned

If your dog is sneezing due to a minor allergy diagnosis determined by a veterinarian, it’s not a serious condition. You’ll notice the sneezing happening more frequently, but you can keep an eye on your dog and monitor their condition.

If the sneezing is accompanied by pain, lethargy, nasal discharge, or coughing, your dog should be evaluated by a vet to see if they have a respiratory infection or illness.

Foreign Object in the Nose

If your dog is sneezing repeatedly, they may be trying to dislodge something that’s stuck in their nasal passage. If this is the case, a veterinarian will have to remove the object. An irritant like pollen or dust could also be the culprit, but your dog should be able to clear that after a few strong sneezes.

Now that we’ve covered a few of the reasons that your dog excitedly sneezes, you can try doing this back to them! If you playfully sneeze at your dog, you might find that they take off to find their toys to bring to you or that they go wait by the door to head outside for a walk. It’s a cute way to communicate, and you can watch your dog do this with other dogs too.

Sneezing is a cause for concern when it is accompanied by other symptoms and occurs when your dog is not excited. If you notice anything out of the ordinary or the sneezing doesn’t stop, take your dog to the vet for a checkup. Sometimes, allergies are the cause of this. Other times, your pup may have an illness or infection.

While there is so much that we don’t know about how dogs communicate, the more we do understand, like excited sneezing, the closer we can be to our pups.

-Related read: 4 Reasons Why Dogs Pee When Excited (And How to Stop It)